Went, hardly breaking the dirt on the road, blurred in the previous days rains, when the temperature was 13 degrees. 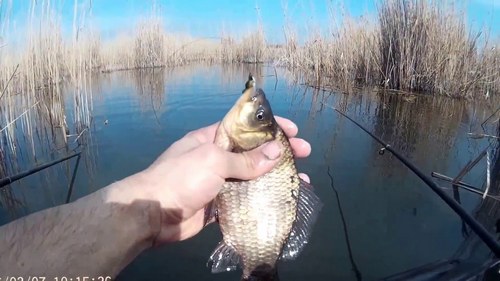 To the great annoyance, from the early morning blowing unpleasant and not very beloved by the fishermen of the South-East wind, not a sign of a good bite But we are well insulated, spacious cloaks, worn over padded jackets and felt quite comfortable. So boats did not carry over and are not blown away by the wind, anchoring them across the river, tied a nylon cord attached to the stems of reeds.

The width of the hopper in the ducts was very small, and it seemed that the length of the tight inflated the boat completely block the riverbed. But, to our joy, the narrow ducts alternated inviting yourself pools-placecome with a depth of about three meters, at which the catching of a predator trolling was very real.

From the beginning fishing was quite a lot of perch knocks, guess the wince nods (the presence of which on the side rods I believe it is absolutely mandatory), but the grips were not enough. A similar phenomenon was to be interpreted as a sign of the beginning or end of a bite. Apparently, in the fight against road dirt we lost a lot of time to catch started too late — about 9 hours. Despite this, I sat down on the spoon and come down the sides very good (by our modest standards — under a pound) grouper and soon, to the great annoyance and after a stubborn fight the pike more than a kilogram. My companions fared much better, especially our third companion — Nicholas Ageev. He was famous for the fact that in his workshop in his spare time, led a “mass production” spinners own original designs, stamping them from rolled plates on the rolls of silver coins, supplying these lures all Penza fishing fraternity. “Ageevskaya” spinners famous for the fact that it was considered efficient.

So we procurorului along the hopper until noon, when the wind suddenly turned into a poisonous North-East, sometimes accompanied by a prickly snow flying parallel to the ground and giving itself felt in spite of the heavy clothing closure, covered with snow and her and the boat. To sit in such a condition was uncomfortable, and rescued only one fishing a passion, even though we were shivering from the cold.

After lunch broke and began to wrap up, folding krusteva from ice boats. Have Lokhmatov was 11 perches, Ageeva — 8 perches plus three sorenka under 300 grams, I — 7 perch close to the same surenos as Ageeva. Despite this, everyone was happy: after all, “deceived” privaledge!

Went home on hard road, caught by the frost and dried by the wind.

And in between October and November the temperature fell to minus 11 degrees and came the longed-for time of pervolakia.