Often fishing surprises waiting for us nearby, in some unmarked river or lake 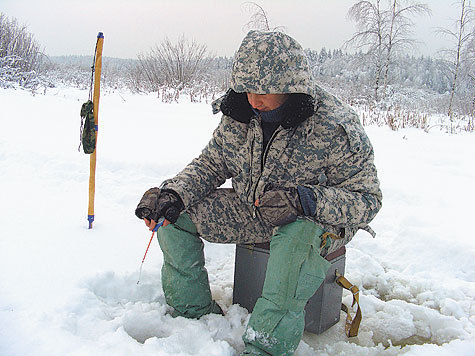 On Christmas vacation I visited the country with a friend, of course, went with him fishing. Nearby is a large lake, through which flows a stream. On the lake we were lured in “hunting” places holes on them and we went on an early frosty morning.

Nibble on the hole was excellent, but the size of the fish, to put it mildly, not pleased. Caught plotnicki and okoshki suited only for live bait, but after my friend put all of his five Gerlich, meaning to catch the little thing was gone. Tried to catch on the large bare jig, still got just the thing. Local fisherman-the old-timers said that the feed hole should be at least three days, then it still can be a serious fish, at us was only the second day of feeding, so my Grandad advised us to go for a big fish on the Creek.

I must say that this ditch, which flowed among the reeds, the name of the Creek was too hot. When I came to him, did not even want holes drilling to catch something anywhere. In length of free space, twenty meters, wide – wide step. And above and downstream the brook was lost in a swamp, to the lake at the swamp was about a hundred meters. I could not believe that fish could get into this ditch, especially since it here can be large. I guess he decided just to laugh at newbies. But after the first transaction in the first drilled hole me, it became clear that the place is not easy. I immediately got a good plotwise and a few decent perch. Another did not bite, I gave him my hole, and he looked to the groove: it turned out that even under deep snow can be distinguished, where it makes several turns before you get lost in the reeds. On these turns I drilled the hole. Here, as I expected, turned out to be the pits, and these pits, just contrary to my initial expectations, began to be caught-dimensional perch. And biting was, as they say, like a machine gun. It is clear that the bass were very tight, and how could it be otherwise, if he in this brook was not much space for Parking. Biting, however, did not last long, maybe half an hour, but we flew away during this time from the heart.

Bass in the fishing pleased, grandfather, we recalled the kind words, although it is, of course, examining our catch, said the clowne, by his standards, was below average, because he usually catches roach 400 grams, and a perch for him weed fish.

Well, we were happy with that gift. And I through this experience once again convinced, it is necessary to carefully examine even what seem quite familiar and natural bodies of water, often fishing surprises waiting for us nearby, in some unmarked small river or lake that we always walked past.