The question is: what is better to bind to the end of the fishing line – a lure or a hook with a sinker? The question is not idle. Not once convinced that this difference in the snap-in rods depends largely on the success of fishing. 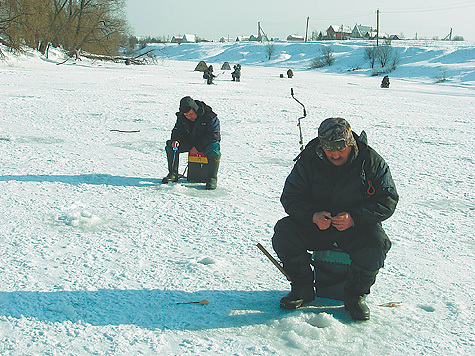 Long ago made it a rule at the beginning of fishing necessarily is lowered into a neighboring hole with a float rod with different accessories. One with a jig and the other with a hook and sinker. Which one will be more efficient for the same and switch to catch. Pull out of hole ineffective tackle, instead, down another. So many times that, for example, yesterday successfully “worked” a rod with a sinker and a hook, and today, on the contrary, with a jig. However, as practice shows, on the rod with a jig, the float POPs up more often. However, the idle holds, and gatherings of fish, sometimes more. And the bait with the hook and sinker bite occurs, but they are more loyal, reliable cutting.

What is the matter? Why is this happening? For a start consider the case when fishing the bait with a jig. It is easy to imagine in what situation lies with the two pond your jig fitted with a crank. When well-regulated gear (balanced weight of the lure and the buoyancy of the float) the hook of the jig will lie on the bottom in a horizontal position, but the bend of the hook in this case is directed upwards.

It turns out that impaled on the hook mormyshkas bloodworms will as it is raised above the bottom, respectively, at the height of the bend of the hook, that is 4-5 millimeters or more, depending on hook size. Among the bottom fish feed, including a lowered trough feed bloodworms, this lure stands out, attracting the fish. She offers herself like a fish, and the fish takes. More often than quietly lying on the bottom of the crank, put on the hook.

It would seem that even necessary? Fishing success seems to be guaranteed. But don’t blindly go for fishing only rods with a jig. As mentioned above, such tackle, often there are idle sweeps. The fact that the fish took the bait with a jig, still feels unnatural weight “feed” and often throws it. The float signals the bite, the angler hooking, but later, the fish has refused from such “food”. Although the tackle is extremely regulated and balanced.

And to the hook of the jig lay on the bottom in a horizontal position, you must use the appropriate jigs, the most suitable for fishing from the bottom. This is the first “pellet”, “ê”, round jig tapered shapes and others that are in limbo take a horizontal position. Not suitable for this jig type “uralka”, “osinka”, cone-shaped and other elongated lures that are hung on the line on a slant, and the more upright. Lowered to the bottom, they filled up on its side. Even if the fish and want to take this bait to do it, it will be difficult. Such jigs are more suitable for catching the game with a nod.

Bite less, but rather

There is no need to prove that when fishing the bait with the hook and sinker lying on the silted bottom of a hook with a bloodworm not so visible to fish than a jig. Therefore, the catch on such tackle have to wait longer. But, on the other hand, lying on the bottom with bloodworms fish hook confident enough, because they do not feel unnatural excess weight, in comparison with a jig. Bite this gives more correct, reliable cutting. Gatherings of fish almost never happens.

And the bite in the tackle this differs markedly from the bite on the jig. The float rises sharply and immediately, but first will swing from side to side as if to warn the angler – attention! And only then begins gradually to rise and cling to the wall of the hole, which is often observed, if in a reservoir there is even a small movement of water. To miss a bite almost impossible.

As you can see, fishing in two different gear has its pros and cons. And so it is advisable to use fishing both. Personally, I had many cases when more effective fished either on rod with a jig or a sinker and a hook.

Did not had the chance to see some anglers adjust the float rod so that the float protoplanets in the hole for only one or two centimeters from the surface of the water. And believe that doing the right thing. Say, in this position of the bobber to see the bite, especially as the float POPs up quickly and laid out. I responsibly declare, that this opinion is erroneous. Why?

The fact that the fish took the lure from the bottom, raises it. When it rises and the float. However, after one or two centimeters of rise of the float will give their best, will be free to lie on the surface of the water. So, he would cease to be a counterweight to the sinker or jig. The fish will immediately feel the “catch”, throw a “treat”.

And so it is recommended to be embedded float not less than 5-7 inches. The rise time of the float the fish is increased, and therefore, during this time, the more reliable fish swallow the bait. Empty holds and approaches fish will be less, and fishing in General – more effective. But in this case, you should not wait until the float is fully up. It is necessary to strike during ascent of the float.