Lifestyle soma, the biological rhythm depends on the climate zone habitat of the fish. For example, in Spain, where som bred artificially (Amateur fishing in this country is very popular and attracts anglers from all over Europe, competing with our Akhtuba primarily service), ice cover of reservoirs is not the case, the fish are active all year and reaches a very impressive size. “Hot spots” habitat soms in Russia can be called the lower don with its tributaries and estuaries and, of course, the basin of the lower Volga Akhtuba and Delta. In Europe, excluding artificial ponds of Spain, a significant population of catfish is only in the Danube. The natural boundary of the range of ordinary soma in the West is the river Oder. In the rivers of pool of Arctic ocean this species of catfish is not found. The largest of the European catfish caught was a predator with a length of 5 meters and weight of 300 pounds. 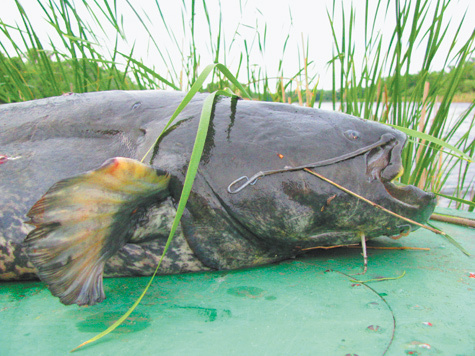 The above means that the catfish is a fish-loving and drawn to the southern waters. However, this does not mean that som little in Central Russia, where the climate is mainly moderate. These predators quite a lot in Oka, in the rivers and lakes of the basin of the Upper and Middle Volga, including the Volga cascade reservoirs in the upper don and its major tributaries. But soma of these areas do not grow to such huge size as in the South, however, the fish weight in pounds and common thing here. For example, the Nerl arising from pleshcheeva lake, recently met catfish weighing up to 80 pounds. In earlier times, populations of catfish in small rivers was significant for another reason: there were many dams and dams that created a perfect habitat and breeding sites for most fish, kept a huge amount of juveniles during the devastating floods. With the destruction of the dams the pool was shallow, from rivers were only wetlands…

The period of greatest feeding activity of catfish begins immediately after spawning and ends with a significant cooling of water: in the South is may-October, in Central — June-August. While smaller catfish used to be a big start in the spring to feed and fit them much later in the winter.

These terms are the most favorable for sport hunting for the mighty predators of all known fishing gear. But among the variety of mining methods som true hunters prefer two — spinning and fishing with Kwok, the last specific when catching this fish and is one of the most ancient in the history of fishing culture.

For roach in June with a fishing rod

In ancient times, Kwok, shell, emits a distinctive sound when rapidly in contact with water, made from the horns of large ungulates, and that as Homer in the “Iliad” (24 song) speaks about the Iris, sent by Zeus for Feiday, comparing the rapidity of its submersion into the sea with the work of Kwok:

“Fast, like lead, into the depths plunged the goddess,

If it is attached to the horn of the ox Stepovoy,

“Now you, o som sing of the mighty fish,

Seem to me you’re a Dolphin river when powerfully

You from the bottom of the water penetrating his heavy body

Barely eking out and about the bottom of the river and the grass hurt.

The way when your speed up, powerfully swimming in there

The green shore and the blue waves wonder”.

When spinning the hunt for catfish noticed that the larger the predator prefers and larger lures, which can be heavy spoon lures, large sinking wobblers, vibrohvosta or ripping, as well as dead fish on snastochki. Often the total weight of the bait exceeds 200 grams — this allows not only to avoid unwanted bites of smaller predators (perch and pike), but also among soms to selectively catch trophy fish.

It is understandable that the weight of the tooling rod and reel must be of the appropriate class. For hunting small and medium-sized catfish commonly use awnings of the third class with a test weight of 80 grams and a length of 2.7-3.3 meters, which complement or multipliers of the corresponding class or a powerful spinning reels with a low gear ratio (1:4) and reducer on the basis of the worm gear. The spool of such a reel should contain at least 200 meters fishing line diameter of 0.4 mm. Usually catfish weighing up to six pounds are caught from nylon fishing line 0.6 mm diameter — thicker dramatically reduces application limits of the equipment and requires the use of rods with a special design of crossing the rings (based on movies) and very large coils. Such heavy tackle used for hunting big catfish weighing more than two pounds, but almost always in this case fishing is conducted with reliable boats or small boats, which eliminates the need to do casts on 30-40 meters and allows you to approach the fish the required distance. Will be invaluable and the convenience that provides a flotation device when playing big “beast”, given that this stage of fishing is not always safe. Somavia important thing in fishing is the strictest observance of silence to the noise alerted predators. Catfish are also well-developed sense of smell, differ absolutely wonderful sensory apparatus — the predator is able from a distance of 60 meters to catch the slightest movement of the victim and to clearly locate her location.

The rod used in the hunt for the big catfish, heavy enough, therefore, to reduce the weight and, given the use of boats, they rarely do longer than the 2.2-2.6 meters.Specialized under this fishing spinning rods usually have a knee on the butt marked “som”, where also marked and the test, which range, typically 150-300 grams.

Choosing a reliable line for Somavia tackle, should focus on the fact that catfish — the fish is very strong and resistant and when fighting the fish to tire it will be possible not soon. A successful struggle will help elastic thread with good wear resistance, which, if critical loads are able to take almost 20 percent of the original length as the spring shock absorber. From the variety of nylon fishing lines these properties to a greater extent have fishing line medium hardness and soft. Quality monofilament in addition needs to be calibrated (to have the same diameter throughout its length) and be transparent to the light as glass so less noticeable in the water because it takes the color of the environment. Going for catfish, it is necessary to have an adequate supply of fresh fishing line: be prepared for the fact that after the capture of a large predator “exhaust” line will have to be replaced — it will be mercilessly flattened about ring and roller line bale of the reel and injured a lot about the various irregularities and objects on the bottom.

Lately when fishing for freshwater predators including catfish, anglers began to use braided fishing line made from the finest fibers high modulus polyethylene. Their advantage is that they are extremely durable — more than 5 times relative to the nylon monofilament of the same diameter, approximately the same ratio and durability. Besides, with such a cord, the tackle becomes very sensitive even to weak bites and light touch the bait roughnesses of a bottom, because this line almost does not stretch and for this reason is an excellent waveguide. However, the property lines and substantial disadvantage, since in the fight with big fish tackle is devoid of extra shock absorbing properties, and the entire burden falls on the rod. For this reason braided line made of the special rods with increased strength.

When fishing for sports gear when the playing starts immediately after the bite, necessary in a metal leash not, because numerous small teeth soma that form in the mouth of a fish, like a toothbrush are not able to quickly crush monofilament or braided cord, although after the capture of predator injured, quite a dog-eared part of the cord will have to come off.

The most important detail of the tooling is, of course, the hook that directly opposed the indomitable power of the catfish. Bad hook a big predator or easily bent or broken, or crushed when the som compresses his huge mouth along with the bait. A good hook is definitely forged, to withstand at least 20 kg of cargo, pry the tip in. Now these hooks in abundance are produced by foreign firms, although they are rather expensive, but incredibly durable.

In sports fishing, when fishing for catfish used as single, double and triple hooks — it all depends on the kind of bait. Spoon lures are equipped with one powerful tee; jig-heads, which are provided with large vibrohvosta or ripping generally odnorazovye; crankbaits are equipped with two or three doubles or treble hooks; snastochki depending on their design, combined from single, double and triple hooks that are placed in various parts of the lure.

There is no sense long to speak about other important parts, snap — vertluzhnoj, carbines and Groovy rings. They must meet all other elements of the tackle and the likely size of the trophy.