With the onset of a heavy period thick ice, many exclude roaches from the objects of search and fishing. This is due to the fact that supposedly comes gluhozime, which is still very far away, and what to look for roaches “from scratch” physically difficult. Dozens of holes made during the search can, will bring success, but probably not, if the search is blind. Need more or less familiar with the lake and the habits of fish in it. Fishing becomes effective or, in the case of maximal activity of the fisherman, which is characteristic only for athletes (for temperament and behavior on the fishing), or those who know very well the pond. 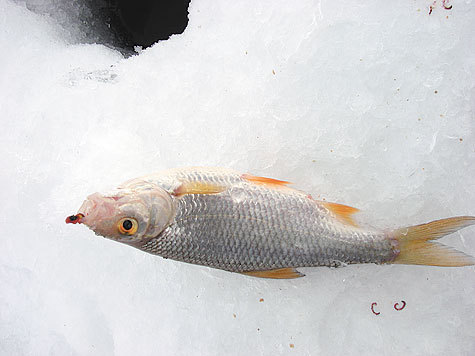 As ever, we need to pay attention to the quality gear. What tackle is preferable, I expressed my opinion earlier: after all, the jig is preferable because it allows the use of thinner and sensitive snap-in. Whatever reduces the weight of the float snap-in or use a thinner line, but still the inertia of snap will be considerably more than when using the jig. Besides, using the jig you can always play along with the bait. But roach likes it. She is offended by the bait falling to the bottom, then falling or coming off from the bottom, and then playing in the water. With the sluggish Kleve effectively use baitless lures.

The quality of the snap should be very high. Fishing line diameter of 0.07-0.09 mm, microscopic mormyshka with silver or black color with a thin and durable hook, ultra-sensitive nod – this is the tackle that will help to achieve success.

Fishing is conducted on a very limited area, when realistically make no more than a dozen holes on all future space above the Parking lot of fish. Therefore, every action should consider. It is impossible to run, to throw on the ice box, or ice screws, that is noise. All the extra holes you need to fill up with snow, and workers to disguise, that is covered with snow. “Exposure” to a place of fishing is one of the main reasons for the cessation of biting even if the fish the place is not left. If the Parking lot is discovered or known, the necessary bait.

The composition of the mixture largely depends on the location and preferences of roach. In many places, works any bait for cold water, like bloodworms, and without it. Most of the quarries and small lakes, the roach responds only to bloodworms and milk. Bait with crackers could over time lead to the fact that roaches do leave this area. On large reservoirs and rivers this happens much less frequently, if the fish left the area, it is likely that it happened for some other reasons.

In my opinion, when fishing on the reservoir for delivery of bait is best to resort to using feeders. There are a few subtleties. First, the feeder must be very small, with a volume that accommodates no more than two matchboxes small moth. But this is enough to keep roaches found in the area of fishing. Secondly, access to the feeder is better not at the bottom, and much higher. At a depth of four meters, I open the feeder at a distance of half a meter of ice. Thirdly, and this is important, dry bait mix I is mixed with water to the desired consistency still at home. It is necessary that the components of the absorbent mixture soaked with water evenly. Only in this case the bait in the hole will give the post the necessary density and stability.

In the middle of winter very productive evening, and the flow-water, night fishing. Notice that night fishing is not allowed everywhere and are not as secure as many think. Especially in the current.

Before you go out for the evening catch, must be carefully prepared. Training begins before dark. Need to drill ten holes, starting with irrigation, and reach the drop off into the channel or a nearby pit. Measuring the depth from hole to hole, it should be noted those between which the difference in depth of maximum. Between these holes, it is advisable to drill several holes at a distance of 1-1,5 m and again to notice those holes between the maximum change in depth. The result of these searches serve two wells. One of them is on top of the deep edge, and the other, respectively, below.

Based on the practice of fishing, may notice that between the holes the distance can be from one meter to three, and the difference in depth from half a meter to two. Typically, the depth of holes ranges from 4 to 6m. Around each of these holes need to be drilled very close another hole for the second gear. Found the hole needs to feed.

As bait it is better to use the following ingredients: half a kilo of dry groundbait for cold water, two hundred grams bloodworms. If ready mix is not, then it will be replaced by a mixture of breadcrumbs with bran, which added a tablespoon of cocoa and five tablespoons of milk powder per kilogram. The bait need to mix with water in a warm room. If the composition is too viscous, then it I add the sand. Mixed bait should be placed in feeders (I take three), and the pond will only have to lower the feeder into the hole and emptied. It is important to keep the bait from freezing to the point until it is in the water. A frozen bait will float. Once lured holes, I cover with newspaper and covered over with snow.

For fishing it is absolutely necessary to have a tent. Functional double tent. It will be a place not only for drawer but also a backpack. In addition to tents, you need to bring a portable warmer-lantern. From traditional candles head in a couple of hours is “square” and fishing from vacation turns into harmful work. Fit for the milk to not give the roach, and himself.

Before going fishing, you should mix a small portion of bait. It should use for keeping fish in about an hour and a half of fishing.

Unlike the bait that was lowered to the bottom of the hole before fishing, “night bait”, you need to add is two times less than dry baits and two times more milk powder and bloodworms.

As a tackle for catching roach night time is best float rod. Spinning in the form of a “filly” of traditional foam with the dirty pole made of polycarbonate equipped with fishing line with a diameter of 0.10 mm. are placed On the fishing line bobber cone shape of foam with a carrying capacity of not more than one or two grams, two to three weights of pellets and a hook № 18-20. As bait or bloodworms, or microscopic pellets of black bread. Quite often, for example, in the Volga reservoirs large roach is offended by a piece of unleavened dough. Generally, the dough not only helps in the winter when fishing for roach or when “gets” small fish, but when fishing for bream.

The float sinker to the snap move to the hook and measure the depth, then the weights are distributed. The small sinker is 5-10cm from hook, at a distance of 30cm is still following sinker and so on. In parallel to the hole I lowered tooling jig. It is impossible to predict what is the best be caught roach: the bait is stationary or on a moving bait.

Play a jig to smoothly. No sudden movements, occasionally tapping the bottom. It is interesting that occasionally manage to seduce a few large specimens, if you play a jig intensively and raise it half a meter above the bottom. Several times I had to catch almost all the fish over bait in active play nymph. Dawn roach often takes the nymph. If bite with dawn runs out, I will mix in the direction of smaller places and actively looking for the roach, to the extent that explore horizons at half depth. That is, if no bites, then you need to try and experiment.

To answer the question, what is the best time for fishing is difficult, but usually the bite is observed in the periods from 19 to 21 hours, from 23 to the morning and after four in the morning. Bite crisp and a trifle disturbing.

In General, I believe, roach in winter, almost the most active of the fish pond, but it complicates her search.

4 Comments on “Features of fishing in the middle of winter”