In fishing, especially if the angler is practicing catch different gear, it is important to understand, in what situation what node is appropriate, and also possess skill of knot in the most suitable conditions. Depending on the type of fishing knots sometimes you have to knit in the conditions of limited available light, at low temperatures, as well as other constraining circumstances that brought to perfection the ability to tie knots greatly facilitates the catching process, reducing the time of preparation of tackle to use. 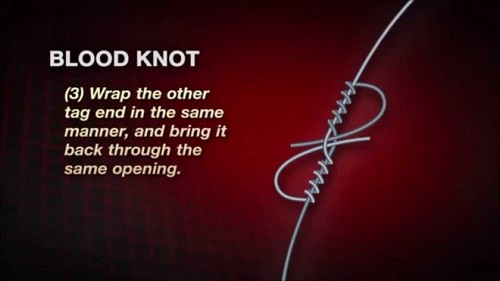 The history of the name node

Like many other knots, a blood knot was originally used by sailors. The days of sailing ships the sailors of many countries have established a name that is associated with a fairly common at that time in the Navy punishment – beating the guilty sailors mnogovato whip. Made such a lash of hemp rope, and consisted on average of the nine braids (although their number can vary from seven to thirteen), the ends of which knit the knots. This whip sailors nicknamed “the cat”, and the knots which fastened the ends of the braids lashes became known as bloody. “Cats” was also different. For punishment for stealing used weighted, so called thieves, “cat”, while for the other offenses were punished, the usual. The penalty no longer applied, but the node name has been preserved to our days.

The sequence of the knitting

In our days, the blood knot found a more humane application. It is used as to connect two lines (or manolescu with a network, so as to do this, it is also suitable, although not considered the best option), and for tying jigs or leash to Monolake.

Important! A blood knot is not used for tying hooks or leash to the cord, in such cases it can only be applied to monolisa.

The sequence of actions when knitting conventional blood knots (in some sources it is also called a snake), which is used to bind two lines, the following:

Linking applies mainly in cases where it is necessary to connect two fishing lines of similar diameter (if the difference in diameter is significant, to increase tensile strength and total reliability of the connection, before you tie a thin fishing line knot can be doubled).

The variant “bloody back”

This is a modification aimed primarily at increasing strength. However, please note that along with the strength increase and size of knot, and then, if the tie is broken by any reason the main monolescu, it when casting he may have been significantly knock on the rings of the rod and annoy the fisherman.

Bloody reverse – sequence of the knitting:

Important! It is not recommended to use this connection on Lisky thicker than 0,4 mm.

Use of knot for tying hooks and lures.

For tying hooks is one of the simplest, although is not the most reliable options, although some improved ways some more successful in terms of durability. Can be used for attaching hooks, weights, lures, jigs and other lures to manolescu, the braids are not suitable.

A regular fit option in the following way:

The version of “trapped blood” knit in the same way as usual. But not only the fishing line threaded through the loop that was formed near the ring of the hook at the beginning, but in the loop, which was formed after threading the fishing line into the loop near the eye of the hook. Thus the free end of manolesti is additionally recorded loop that is believed to be a few adds strength. Such nodes can be used in spinning, feeder, float fishing, and also for equipment of donok.

It is also often confused with a locked, but the difference between them is quite substantial.

The sequence of actions when attaching the hook or jig in such a site with the following:

This mounting option is most suitable when using thin monolisa, and is most often used when attaching either small hooks or jigs. The most expedient is the use for Lisky, with a diameter of less than 0.2, for thicker woods a better choice is the host of “trapped blood”.