Gluhozime, and watch life under the ice to the limit slow, that all living frugally spent the remnants of biological resources. 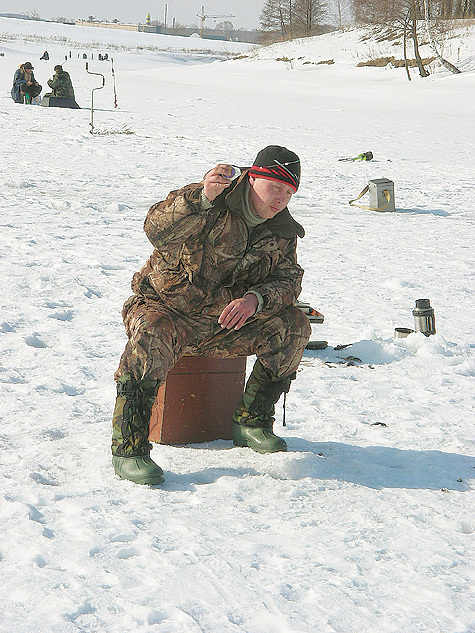 However, no matter how measured, slow neither was life under a thick ice shell, it still goes on, but the fishermen still tend to the expanse of snow-covered bodies of water with the secret hope for a fun bite and a significant catch. And it’s real, if you build the gear and apply the technique of fishing, the least contrasting with the rhythm of behavior in gluhozime not only fish, but also its potential food. The fact that all large Mature individuals by mid-winter are full of ripe eggs and milk and in the food begin to prefer the smallest organism that does not require a lot of effort in their pursuit and ingestion, and drawn into the mouth only with water current. Therefore fishing to catch fish will have to use mostly her need to swallow any food, as in a period of high activity, but only an instinctive need to at least try all edible.

So if in gluhozime angler, uses the finest tackle and line 0,06-0,08 mm and a sensitive nod, and as bait uses the silver will need a jig, the size of which no more match head, and its success is most likely guaranteed. The speed of the transaction and the game mormyshki have an extremely close copy slow movement of small prey, and “work” the bait be in the water layer, where the potential food has shifted. And not coincidentally it often happens that in the middle of winter lestnici-poplavochnikov remain without a catch, focusing only on bottom fishing, and Morrisette with well-tuned gear without bait and even nozzles, probing different horizons of the water, find the fish and successfully catching her. The strikes are so accurate that only an experienced eye can detect the slightest delay in the work of nod. It is precisely those instant testing is only moving, similar to food, which instinctively makes fish.

However, sometimes the shape of the lure is almost crucial in the success of the fishing, and at every pond fish a particular type demonstrates your preferences. For example, long-term practice of catching bream on lures in the Ruzsky reservoir showed full advantage of here lures flat shape, having the form of a “boat” and hanging on the line almost horizontally. The famous “devil” is almost always lost “flat”, as in fishing with a nozzle or without it, although on the small “Jack” roach and perch on this water burn well.

But on the adjacent Ozerninskoe reservoir “devil” certainly bears the palm for hunting and bream and roach and perch, really “respects” his perch here.

Local anglers in the Rybinsk reservoir for catching large fish developed a special form of “oralcy” with a sharp widening at the top, it is desirable that the top was covered by a cap of shining brass or copper.

About fishing in gluhozime really have to say not only about the size of the jig, but also about its color, and the most appropriate nozzle on it, if applicable. Though it is believed that through a thick layer of ice and snow into water, almost no light, however this is not entirely true – in February, in the midst of gluhozime, the illumination becomes so high that the ice and the darkness begins to take their positions, especially in shallow waters and in the upper layers of water where the fish now coming more and more often, because here is preserved the highest content of life-giving oxygen. Besides, small jig, even on the thinnest fishing line at great depths, and especially not sexually – there need other tooling and techniques. So, in difficult periods of winter acts time and again proven the rule: the finer the bait, the lighter it should be. Therefore, at languid biting the best result gives a silvered or covered by a shiny brass jig and painted with lacquer with svetonakopitelnye or fluorescent paint. I remember even cases where the most desperate anglers sportsmen for winning the event ordered craftsmen jig the size of a millet seed, made of gold – perch on them were eating like crazy. Of course, the bright lure profitable only when catching the game, but when stationary the gear is still more efficient a dark, matte jig, even the smallest.

However, to “correct” the jig is well caught, and the bait or artificial infusion for her to put on the appropriate hook, so it does not significantly affect the play of the lure. Clearly, if the diameter of the jig half to two millimeters, and the length of large bloodworms 20-30 millimeters in thickness in mm, such bait will completely distort the play of the lure, making it irregular, chaotic that will alert the fish. In this case it is better to catch on a standing, fixed gear. To be able to use an active technique, it should hook miniature bait stick 1-2 larvae feed bloodworms, the larvae from the stem of wormwood, the small maggot, a tiny piece of unsalted bacon. From the same calculation supply bait small bead or small section of colored cambrica. However, with good technique, if it owns Fisher, small jig catches regularly without any artificial replanting and bait.