Lake Michigan is an ultra-clear lake which gives anglers the opportunity to see fish swimming in depths up to 20 feet. But not at night, Joe was doing this all in darkness. The inability to identify species and the size of the fish always makes the battle a little more nerve-wracking, I can’t imagine what he was feeling. 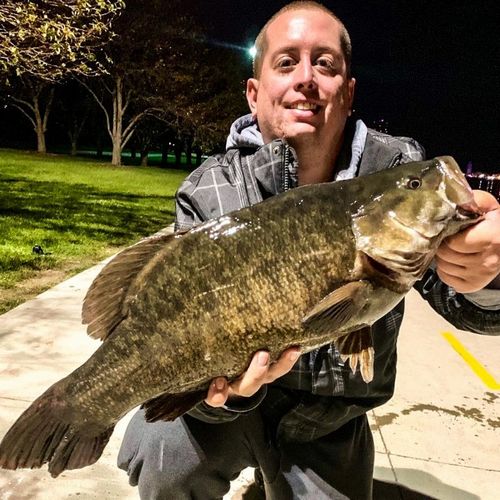 The Illinois State Record Bass has been broken! a 7-pound-3-ounce smallmouth bass was caught by Joe Capaulupo downtown Chicago. Joe, an avid urban angler, was throwing, his tried and true set up – The Ned Rig at around 10:30 pm on October 14th. Alongside his two fishing buddies, Joe was fishing near one of Chicago’s busiest tourist attractions, Buckingham Fountain.

Most parks close at 11 pm sharp in the city of Chicago, so, Joe and the gang didn’t have much time to spare. The guys wanted to cover as much water possible so spread out fished individually. Not long after wetting his line, Joe hooked into something massive. Right away he knew if this was a smallmouth bass, it was going to be huge.

After a short fight, Joe landed a behemoth of a fish (all on his own) and instantly knew this smallmouth bass was different… State record? Could it be? Estimating a fish’s weight is never easy but Joe was pretty sure his catch was big enough to break 6 pounds, 7 ounces record catch from an Illinois quarry in 1987.

Joe’s goal was to bring his fish alive to Henry’s in the morning, get his name in the record books, and then release the monster back into the lake. It was getting close to 11 pm. And all he had to do, keep this monster alive until Henry’s reopened early the next morning

The guys put their noggins together and devised a plan; First, get a heavy-duty plastic bag and fill it with water. Then, load the fish in the bag and race back to a friend’s house who was waiting with a filled tank.

Once back at the house—and before dunking the fish for the night—Joe weighed the fish on a digital scale. Reading in at over 7lbs, they knew a record was in the bag. Now it was time to celebrate—moral was high, drinks were flowing, all they had to was wait.

Bright and early the next morning, Joe took a ride down to Henry’s to register his fish. I never asked, but I imagine that cruise down to Henry’s was one of the most interesting drives of Joe’s life. 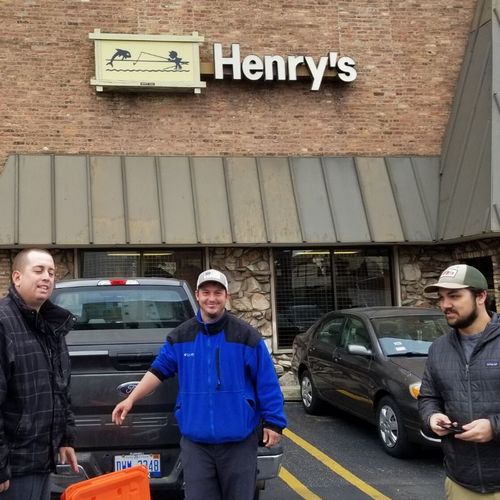 Once at Henry’s an official was brought in to certify the fish. The official measurements came out to 22 1/3 inches and a weight of 7-pounds-3-ounce. Papers were signed, hands got shook, and pictures were taken. It was official, Joe Capilupo was the new Illinois Sta state record holder.

The Illinois Department of Natural Resources confirmed the state record catch. Joe’s catch beat the old record by three-quarters of a pound. The previous state record weighed 6 pounds, 7 ounces and was caught in a strip pit lake all the way back in 1985.

The official measurements came out to a length of 22 1/3 inches with a weight of 7-pounds-3-ounce. Papers were signed, hands got shook, and pictures were taken. It was official. Joe Capilupo was the new Illinois state smallmouth record holder.

The previous state record—caught back in 1985 in a strip pit lake— weighed 6 pounds, 7 ounces. Joe’s catch beat the old record by three-quarters of a pound 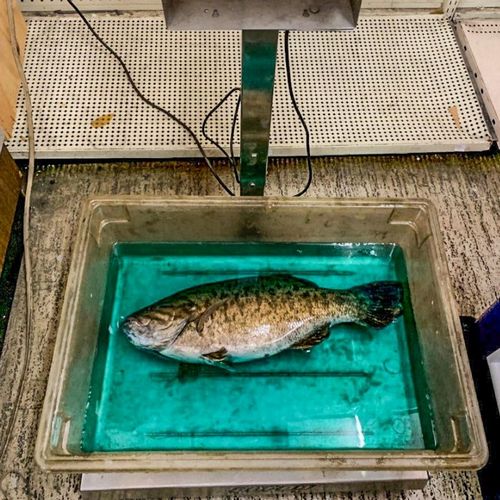 Instead of keeping this fish, Joe was set on releasing his record. At first, I heard rumors that the fish was going into a Bass Pro Shop tank—then, I heard it was being released at a secret location

Only living a few blocks from the Henry’s, I rode my bike down there to get a glimpse of the fish. And I was lucky enough to catch Joe and his fishing pals as they left Henry’s on their way to release the fish back into Lake Michigan.