The Rybinsk sea – dream ice fishing fans. In their view, is a fish of Eldorado. Rumors about the rich fishing in these parts, especially parvaldu, constantly walking in an environment of fishermen and excite the imagination. Far and difficult to drive – no problem. All, without exception, believe that there they will meet a holiday fisherman of fortune. If not there, then where else? It is only necessary to drive. But alas! 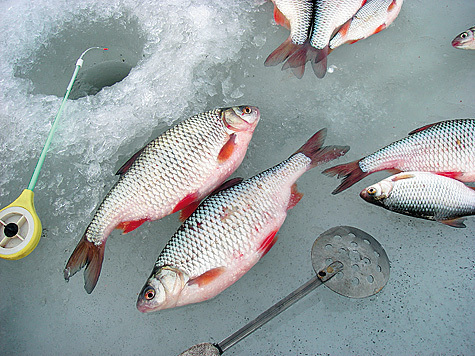 Quite often, this welcome friend laughs directly in the face of our hunters good luck. You think that stops them? Not at all! Day and night without sleep, skidding and breaking the exhaust pipe on the road, they come here again and again, convinced that this time the experience will be for the rest…. And interestingly enough, often fall into the “top ten”. If the guessed time, if not jumping the atmospheric pressure and the wind East, and the place chosen correctly, and if something else, then the Orgy of delight! Here go the rumors and not exaggerated. That “something” happened to me on one trip on the Rybinsk reservoir. Somehow at the end of November our bus, on a tip from one of the regulars of the Rybinsk water area and got Renu, one of the small rivers flowing into the reservoir. Arrived after dark to shore, fortunately the ground was frozen and no snow. Hastily drinking some tea to perk me up after a sleepless night, the fishermen turned to walk on the ice. My observation is that, say, early, dark still had no answer. Having agreed on the fee when fishing at seventeen thirty, the fishermen went out. I know from experience that the beginning of the bite is necessary to expect after dawn, and even later, but every time I go because the others go. This herd mentality, but such is the fisherman.
I came out of the bus and looks around. In the East a little glimmer of dawn, but still dark, and the river can hardly be noticed. A little wind and frost, feeling about ten degrees. In my opinion, the weather for fishing was good. Thoroughly bothered by the problem of unfamiliar places, it is always and everywhere difficult. Where to go? I only know that on the right, two kilometers away is the mouth of Reni, and nothing more.

All together down to the river. The ice is bare, without snow, the first ice – fact, warming the fishing soul of great hope. Drill the hole, determining the strength of ice. Its thickness is about ten centimeters. It is a rather strong ice, which can move freely, without fear of consequences.

Who is seated where, without going far, deciding to decide definitively with the dawn. I’m not in a hurry, smoke and think about upcoming events. I think that, perhaps, there is over and will have to adapt to it.

Gradually the sky turn gray and begin to appear the outlines of coast of the river. Make the hole and spread the bait. Yes, there is a small current, because you can’t define the bottom as the jig blows. Put heavier now normal. The depth of about two meters and a half. Baited with bloodworms and begin to “normality”.

Half an hour passes. No result. Finally dawn broke, and I see all my colleagues, intently bent over the hole. No one is waving his hands is a bad sign, no biting.

Half an hour later, the fishermen begin to disperse. I also removed from the scene and go up the river. Drill the ice, try a different technique of “shaking”. Empty! Begins to sour the mood, but I work to open new holes and hopefully work in the same way. A couple of small roaches there does not change my views on fishing on the first ice.

I’ve already lost her, go alone and see where we can best place. Ahead on the right you see the Bay. Now, it seems, is the place. Go, sit in the fresh hole and hard fishing, thinking about fishing the vicissitudes of fate. All seem to have: rich pond, and the first ice, and the weather is excellent, but the pointer rod is still lethargic and doesn’t flinch from the bite.

At some point instinctively turn your head and see the lone figure of a fisherman sitting on me, nearly forty meters away. Something about her drew my attention. Look and believe your eyes: despite the distance, you see next to him, dancing on ice big “tails”. Here he gained hands and the next moment was thrown in front of another fish. It’s too much! Pick up the box and go to the fisherman. Fit. Look him and his “equipment” talked about the fact that he’s local. He sat on an overturned bucket in front of the hole, the torn edges and the size of which talked about the fact that she hacked with an axe, lying at a distance. He was wearing an old quilted jacket, cotton soiled his pants and lined boots without galoshes, on the head – soldier hat. By sight to it was years forty-five. In his hands he held something roughly worked, resembling a fishing rod. A scattering of large roach in front of the fisherman was fascinated and impressed. Some “pull” on half a kilo. Along with the roaches to dance and broad white fish, apparently, skimmers or bream, the same dimensional. I was “knocked out” is seen.

“Hello,” I greeted, approaching him.

– Good health,– okaya in the North, warmly replied the fisherman, turning to face me.

Can I ask what You catch?

– Please,– he readily agreed and began to select forest from the water.

On the palm, outstretched to me a fisherman, I saw a huge, eight millimeters in diameter, lead jig, the hook of which was impaled a shitworm.

– That’s it! And I have bloodworms nothing,– I mumbled disappointedly.

– So the moth is even better– with the accent on the “o” quietly, without turning around, said the fisherman, engaged in his tackle.

He stunned me with its conclusion. How so? That can not be,– went through my head. I was proud of their great fishing rods with sensitive witness marks, considered himself an experienced “technician”, but turned up empty in a situation when “…the Joker even better.” Probably, here the place is excellent, the edge of the coast runs, which kept the fish I got for myself is seen, heard and my failure.

– You ruby and sit here, beside me! – brought me back to the feeling of the fisherman’s voice.

I instantly drilled five meters from his hole and began skillfully to work as a pointer, tensely expecting that he abruptly twitches and I feel down most platinuw heaviness. Did one transaction, removing the jig from the bottom on two feet, made the second, fifth, tenth… Zero! A big round zero! My nerves can not stand, rise and approach the fisherman:

– Nothing! Something here not so!

– Well, let’s go see– a friendly okaet he rises and goes to my hole.

I’m starting to show “technique”, and then there is quiet tip:

– Not necessary to shake! You put that down!

Put the bait on the ice and podmetina line so that the jig touch the bottom. A fisherman stands by and watches my actions. Has not passed also half-minute as a sound of victory March: pointer solemnly went up! It’s time! Cutting! It! Multihouse feel bottom heavy. Working with his hands, intercepting the woods carefully and smoothly, not giving slack, dragging. With a distinctive squishing sound from the hole is first to the ball and falls on the ice a huge beautiful roach. Hands shaking, looking for a cigarette and look at the teacher.

And they say nothing! Congrats to you! – laughing my a good mentor.

It was really only the beginning. I shared the bloodworms with my good guru, and the subsequent three hours spent on this patch was fantastic, interesting and memorable for a lifetime.

I quickly grew familiar with the technique, and the scaffold cross-section of 0.15 mm behaved just perfectly: no breakage, despite the fact that regularly had to pull out fish weighing up to a pound. My opponent also successfully caught that was incomprehensible and surprising, keeping in mind its bait-home-made with her line-a rope and a jig the size not the biggest hazelnut.

In the pause, for tea, which I shared with him, we talked on a fishing theme. He said that the worm stores in the fall, keeps it under the floor in the box of manure and catches on it all winter and spring. In the spring of the sea in Renu comes in a variety of fish, and this time, in his concept, is real fishing. I immediately imagined what it is, if the present for it – the usual.

We said goodbye to Nicholas, was the name of my good friend, friendly. I gave him the spool of fishing line and a few jigs, and he left me his address for fisherman’s “intelligence” for the future.

Back to the bus, I went slowly and heavily: cut shoulder strap box, stuffed to overflowing with fish.