The fact that fish of different sizes is fed and concentrated in different places, not a secret, but this is very often overlooked. And in vain, because it is from knowledge of the habits depends on the success of the event. The division of herds fish by size is very characteristic of the roach, and is particularly evident in the cold season. 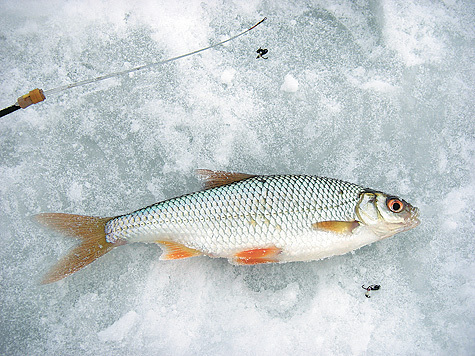 Coastal, or “shallow”, roach is almost the whole herd all small and shallow waters. She eats about plants larvae and small crustaceans that live in the water column. The basis of fodder she is the moth, where the moth is enough coastal roach can reach quite a decent size. In winter, fish of this type is the most profound, because here in Il and focuses bloodworms. Very rarely, but it is possible to detect small roach near the first bottom of the coastal edge, where it appears periodically, i.e. raids. Even harder to the shore to find active fish that are caught accidentally. In large lakes shore roach in the winter is spent on places with an average depth of no flow, silty soil. This is usually designated with a depth of 3-5 meters. Catch her in General is not interesting, because the bite is unstable, and you need to tie the fish to the hole, while almost every day knocking holes in the bait. And most importantly, you will quickly catch a few fish and waiting for the next approach, and the size of the fish close to zhivtsovy. With the exception of the roach in the very rich food large reservoirs, e.g., reservoirs. Here coastal roach reaches quite a decent size, an active search for food at various depths and throughout the winter remains a worthy object. I, for example, on the Istra reservoir has long been not fishing for bream and go specially or perch or roach. Here to find gold coast roaches can almost always, another thing is that the catch can be five pieces, and three kilograms. But in any case, look for a roach with a jig or nymph at depths from one meter to five interesting and promising. During such a search often find a pack of decent perch and the fishing becomes quite pleasant.

Much harder to hunt for depth or as it is often called, sea roach.

Roach, who is moving on to food, water worms, and in some more Northern waters to the diet of caddis worm, quickly begins to grow to enormous size. Large and very large roach found in most rivers, especially in rivers that carry a large amount of organic matter in result of human activities. For example, a lot of big roaches not only in the Moscow river below the city, but also a lot higher. Personally, I largest its roach (1.2 kg) caught in winter from the ice in the Moscow river below Karamyshevskaya dam. Some seasons I caught a big roach (up to 400g) on the same river in the area of Serebryany Bor. Mozhaisk reservoir, Rybinsk and Gorky reservoirs are famous for it large roach. A lot of good fish on the Pleshcheevo, the Valdai lakes, and still in many places.

The difficulty in hunting big deep roach due solely to the difficulty of her search. Once the fish are found to catch her is not difficult, although there are problems with the strength of the gear, but more on that later.

According to my observations, to calculate the place where now there is deep roach, unreal. You know and remember the place and time where this fish was caught in the past or another year, but it gives only one. Knowing these places, it is literally every day to check on them, and if you’re lucky, before the spring turn, may be able at least once to get to the bite of a passing flock. The impression is that even in reservoirs of the Volga river, big roach does not go to the track, and is kept at average depths of irrigation, but on the current. Early in the morning this fish comes on briefly close to channel shallows with a sharp edge, day travels, and at night may begin to bite deep watering. No bait or bait of result do not give, except in certain circumstances when you catch in a river of medium size, where the roach enough, and the place for Parking is limited. And still, must either be very lucky or need to purposefully hunt for roach, not exchanged for detail.

When hunting for roaches of any size should be aware of some observed regularities.

Experienced anglers are of the opinion that roach chooses places with very warm water, even if the difference in temperature will be fractions of a degree.

It should be noted that places with very warm water, usually located in the deepest areas of the reservoir, but it is here that the most unfavorable oxygen regime. So roach is the border where the optimum observed for this reservoir the relationship between water temperature and oxygen content. Roach remains active throughout the winter, she moves across the pond until you find the optimal conditions, stops in the selected area to spring changes in water level in the reservoir does not leave him. This is not to say that in other parts of water, the fish is missing. Quite the contrary, roach or otherwise distributed throughout the reservoir, but that bite only at specific points.

The task of the angler to find places where there are roaches, and where it is active and feeds.

Fish occasionally, under certain weather conditions and time of day, coming out to feed. The rest of the time she or settles, or moves.

Given the multifactorial nature of the conditions, the effective catching roach now becomes a lesson is successful only if the angler from fishing to fishing is engaged in targeted fishing of this fish.

Start search makes sense from the places where they found the fish at first ice. Very promising in this respect, the upper edge of the channel, which begins a sharp stall in depth. As practice shows, the thicker the ice becomes, the more accurate you need to define the edge, because an error of even half a meter can cause failures.

Good area between the deep drop offs. For example, the braid goes underwater from the shore with a smooth decrease up to five meters, then a sharp drop-off by seven metres, after the drop-off area with a minimum width of meters and the depth of nine meters and more. It is important to designate this area and carefully to examine her. For the survey will need at least 10-15 holes.

You can use two tactics search. All future wells to feed bloodworms or bloodworms blend with a winter bait. Twenty minutes later, to check for active fish. But it is safer to use baitless “nymph” or “devil”. After the detection of the working holes their is to. After that, the hunt turns into a catch or a jig with a crank or with a float snap-in.

The choice between a float and a snap of the jig is determined each time. It all depends on what water is to fish. It is interesting that the roach can now better take the bait on the hook and on the next day prefers jig.

Above I mentioned that when hunting for the really big roaches can cause problems with the strength of the gear. Now, when there is really a very high quality fishing line and hooks, this problem is not as acute, but a few years ago, many unexpected breakages were written off for pike, big perch, but not on roaches. Roach, like no other fish, “likes” slim snap-in, but also likes to snap off. It can be argued that if you bait the fishing line is thicker than 0.16 mm, to catch a big roach in the winter will be at night or during a move, or completely by accident. The line average quality of such diameter pound roach, the cut to the depth of half a meter, pulled the “don’t scratch”. Therefore, if you devote your time to a large roach, we have to look for the highest quality fishing line 0.12 mm. it should be remembered that the line with maximum initial strength “live” for long, that is, their initial strength quite rapidly reduced to “normal” the average strength of modern lines.