Disregard for Ersu seems to go down in history. Even twenty years ago, most of the anglers spoke about this fish, if not with disdain, then certainly with the disrespect for sure. Revaluation ruff is not because he suddenly became bigger and tastier, but I think, due to the fact that catching it was not so easy as it was before. Ruff is now less, and it is noted by many. A fish more or less decent size was much smaller. Good news is, that ruff began to appear in waters where they’ve never been caught, and here he is clearly on the rise. First of all, this fish suddenly appeared, and can be manifested, in some deep quarries. One way or another, but especially to catch perch is not only interesting, but also quite difficult. Difficulties appear as soon as you receive the task that is to catch the pig by the ear, or “bait”. 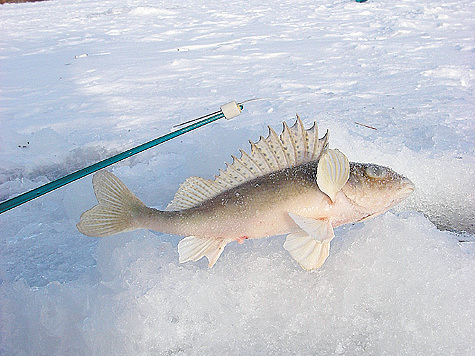 Search ruffe resembles the perch search. That is, you first need to find a place with the first bite, and then look for the point of fishing where the fish are active and a lot of it. Most often this happens when fishing large, by the standards of this pond, ruff.

Just a couple of years ago, I once again ran into such a situation. On the Volga, fishing for perch on deep watering in flooded snags. The hole drilled is tight, that is just. One well began to get ruff and I answerly from all sides and, as often happens, ruff peck in two. With two holes, it caught nearly eight pounds “loosechange” ruff and any of the other holes. For clarity, we specify that the entire hole was made at least a hundred and all, without exception, pecked perch. What I liked Ersu the same among the flooded trees at the same depth, we can only guess.

Parking areas and paths of movement of this fish are very diverse and every body of water on your own. Somewhere ruff prefers the deepest pit on the border of the stream, where he takes point on the lower edge of pits, in other bodies of water he can stand between the underwater and spits on steep drop offs in depth. There are water bodies where ruffe caught at the mouth of the Creek, among vegetation, for a depth of one meter. For example, several years ago different-sized ruffs in very large quantities were caught in one of Narsky ponds in the thick underwater vegetation. I did a couple of ruffs caught on the rocks, over a carpet of vegetation on one of forest lakes in Novgorod region. Moreover, the spring lake, with depths up to nine metres. What ruff was doing on the rocks in winter, hard to say. It is necessary to emphasize another fact. Ruff is not only able to meet in an unexpected place, but this fish still has a tendency to migrate through the reservoir, and at a fairly decent distance. He is hiding on the track and in the pits, then go to upper side, and in warm weather even to the shore. But before entering the ice meltwater ruff is still very rarely seen at depths less than two meters. The nature of the soil, on which stands the ruff, plays a significant role, when viewed as a whole. However, every body of water, especially if you have a choice, ruff still prefer certain soils, most often solid.

In the small lakes of glacial type, that is deep, very transparent and spring water, find a ruff is more likely where there is a large roach. Roach in winter there usually is ground in half-waters close to underwater, but the side and closer to a steep slope in depth. Periodically ruff can be found in the coastal area between the Parking spot perch and roach. In these lakes the fish often migrates.

In a large, but relatively shallow lakes and ponds ruff is usually at the deepest place, but sometimes what comes out on the gentle slopes of the pit and even visit places with developed underwater vegetation. Such outputs to the Feb becoming more rare and happens usually during a thaw after a heavy frost.

A very similar behavior of the ruff and in reservoirs without current. Here, ruff likely to be detected near the channel, but larger is also coming out in the shallows after a frost. The exit point is very local, and look for them the hardest, as the fish responds to the bait, but she keeps it long.

In reservoirs over ruff likely to detect in deep areas with weak and very weak flow at average depths of four to six meters. At greater depths, as a rule, already feel the flow and here it is possible, but again unlikely to find a relatively large fish. Flow reservoir-fishing in winter, the most efficient and stable. This is due to the fact that ruff from year to year, selects for sites in almost the same places, responds well to the bait, is held by the bait and the fish always bite. Fish remains in their seats until, until the bottom topography. Since the bottom topography in rivers and flowing water reservoirs changes during the decades, finding a Parking ruff still in the autumn, with varying degrees of success caught from the same hole throughout the winter. However, I advise that if after a few fishings results will start to decline sharply, to search near another location. The fact that such concentrations ruff, which was described Sabaneyev, in the European part of Russia will not find. Ruff in constant hunt for him you can just “knock out”.

In my opinion, most just to catch a small river, which has a pronounced pit on the corners of the channel with slow streams. In such places the fish almost never in winter leaves deep and tihovolya places, very rarely approaching the shore or shallows. On the other hand, the bite on the river may be the most whimsical and to have some certain hours.

The only thing that ruff does not transfer, so it is unstable, variable stream on the river. Look ruff, on the one hand, easier than a perch or a roach, because he always holds the bottom layer and no need to check the middle and the upper horizons of the water. But it complicates the search. Let me explain why. Ruff during seasonal and daily migrations, moving pack near the bottom on fairly narrow trails that is primarily true for sites with uneven terrain. So discovery trails have to drill new holes very close to each other. Roll a ruff trails even with bait in the form of bloodworms rarely. Therefore, the key to success may be the only hole drilled on the trail or local and very small area of Parking ruff.

It is worth saying a few words about the time of fishing. In winter this fish is generally confirms its reputation as a crepuscular and nocturnal fish. As a rule, the best time of the biting periods are early, before sunrise watch. Bite into small areas over about ten o’clock in the morning, and can be renewed in three to four hours a day. On the deep bite is more stable and stretches for almost the entire day. The complete lack of bite to the period from twelve till one, which is typical for bass. The night bite continues with varying intensity almost without a break, but more intense after sunset and before the hour of the night. Broke night, I never ruff did not catch, and not because there is no fish, but because not tried.

In any case, I advise you not to rely on fishing in one well-known tame. Often several holes in a fresh place can completely change the earlier elaborated plan. It happens that the first hole in the fresh promising place immediately starts biting. I would like to emphasize the fact that the first bite on the new holes occurs in the active games of the jig, the same as when searching for perch. If you simply lower the jig to the bottom and wait for a bite, it likely will not.

When Parking found, we can assume that half the job done. But its lower half.

To catch perch you need to tune and prepare for it the same hard as, for example, to hunt for bream. This applies to training places, and the bait and tackle that require specialized settings, but more on that in the sequel.