Every time Igor already did not expect to see that same pike in the thickness of the lead painted dark autumn water, her shadow rushed in pursuit of a shiny piece of metal.

Spotted the torpedo until the last moment disappeared among the dying in the depths of the underwater vegetation. 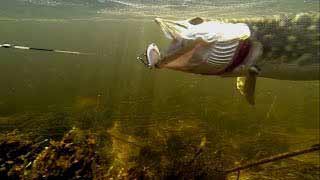 But always unexpectedly pop out of them almost on the surface and scooted reaching spinners, suddenly slowed, like someone invisible was holding her tail, no longer allowing to come nearer on an iota.

This has happened more than once. From the shore to the depths of the pond, left a small trail of clean water. Igor freed her from the bushes in the summer, in late July. Turned out to be so narrow, no wider than five feet, of water clearance. And although by the fall he dragged a little on both sides, but the remaining width was enough to effortlessly send the lure precisely on the track.

Igor grew up on the shores of this pond, called Presnensky, on behalf of the Drezna river, which flows into the pond opposite the house of our angler. The pond stretched metres on four hundred with a small, full-length passing along the street. So many fish have been overfished here, and I do not remember. In her almost forty years Igor knew every corner here, we can say, probing the bottom with their hands. Old, inherited from his father an aluminum spinning with a huge compared to modern “Neva” coil today and quite properly served. More than one hundred tails pulled the angler from the pond simple tackle. But sometimes that frustrated pike, went right under the shore. But that’s how this spotted beast – this has not happened.

It was the beginning of November. Igor woke up before dawn. Dressed, boiled the kettle, made a couple of hot, scalding SIPS. Then walked out into the hallway, where he had left the night before your boots. Oh, they had to put in the house, he thought, now I have to get cold feet in uncomfortable rubber. Well, okay, not the first time.

When he left the house, had already begun to dawn. On the porch leaning against the railing, waiting for an old friend of his father’s spinning. Igor grabbed it on the go sapacheva jacket, came out of the gate, he closed it and headed towards the pond. The sky was not clear, but the rain it promised. Naked trees intertwined bare branches between them as if to warm each other. Sharp gusts of the morning wind circling the faded gold scattered on the frozen banks of foliage.

Presnenskiy the pond was small, half an hour, it can be easily circumvented, oblasova all reserved space. And although the lumen, where hid, the elusive predator was almost on the contrary, Igor deliberately went the other way. He did not know why this time he began fishing with enchanted places. Perhaps, just did not want to spoil your morning mood.

Where the pond empties into the river at its very mouth, a tiny depth: maximum to the knee. Even though feet get stuck in the sand, go here the river wading boots is possible. Igor did not even Bay boots.

On the other side of the pond, behind the old warped concrete fence, is a spinning factory. There shore is steep, even precipitous. The factory side of the deep pond, and grass under the water there never grow so profusely as on the opposite side. However, tightly wedged between a fence and water the old trees make it almost impossible to work with the long rod. But Igor spinning short: a sharp wave, metal lure with a tricky tee flatwise paddled thirty meters from the shore. Now it’s cold, and the predator has long been shifted from shallow waters in the pit where a little deeper.

The first transaction is empty. A couple more casts but nothing. The same story repeats itself for the second and third hole. But and luck. “Uralka” coveted small to pounds, pickerel. Beats in the hands, stare surprised eyes. While Igor came to an abandoned water tower that at the end of the pond, managed to first toothy add another one, almost the same. Third syrenka-runt he let go – let him grow up. But another flight spinners made another fortune in the form of a handsome perch. Gorbachev pulled almost under three hundred grams. Such a perch for Presnenskogo pond trophy enviable. Oculata here for a long time already words, and only where this came from, but still got on the swing that’s big enough lure.

When Igor finally returned to the quay, the wind subsided and seems to have become a little warmer. Maybe it’s from the constant strokes of the rod warmed up?

That’s a familiar gleam in the grass. Only not in a hurry fisherman throw into the water the bait. Stood a moment in thought. I didn’t want this time to be deceived by tricky fish. And then I thought: why he believes pike clever? It’s really not. Someone to tell – ridicule. So why is it always stops and stop hunting? Igor tried to change the types of lures, and the rate of posting spinners, but every time it is on the site repeated the same story. It dawned! And if you hold the spoon at a different angle? But in terms of the narrow corridor in the grass. Not to go really in November in the water to clear the pike square to gain weight. Then there is one thing to try to change the nature of posting bait to make the lure move on a broken trajectory. But short spinning rod for long casting, these maneuvers is also not feasible.

Igor quietly walked down the shore to the water’s edge. Sat. Patiently waited a couple of minutes. Not rising to his full height, made the first cast. The spoon fell a short distance closer to ten meters from the shore. A few turns of the coil and “uralka” already draws a tee groove by a thick black sludge. Again cast, now a couple of meters ahead and against the left edge of the grass. As if it is not to catch! So, it is necessary to try to change the angle of the transaction. Hand sharply away to the right, moving with a jerk in the same direction and the tip of a spinning. Yes, a bit short, of course. But still it happened. Baubles, before moving in a straight path, though not dramatically, but noticeably changes direction. The following wiring on the right edge of the grass. Again, not far, about fifteen meters from the shore, submerged in water shiny piece of metal. The spinner is somewhere in the depths, at the bottom; Igor slightly lifted tip of the rod, stood up himself. We can already see the approaching bait, another ten or fifteen turns of the coil and the spinner will pop out of the water. But the fisherman felt like a pike! Here it is, shadow! Submarine torpedo lightning darted to the shore. Another moment, and all happen: she’ll just leave again, never touched the bait.

Even caught his breath, heart started pounding. No, not this. Igor abruptly pulls to the left the rod, line and bait. Well see how the spoon almost from under the pike nose dives to the side – a crazy move! But all of a sudden, the same hand feel a sharp blow, took, took, beast!