When fishing live bait are used all the gear that caught on worm or bread. All the difference lies in the fact that zhivtsovy snap more durable and contain elements of protection from the sharp teeth of a predator. Depending on fishing conditions, is used as a float, and bottom snap. Consider the most common cases. 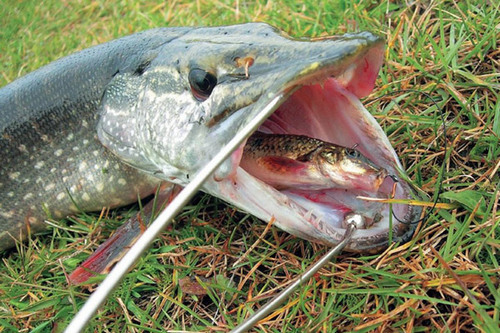 In the autumn of promising small flood-plain lakes, streams, ponds. Here grew over the summer pike. Spinning from the shore to catch is not always convenient, because it prevents riparian vegetation, but float rod – please. On the small rivers is also not far casting is required, so we’ve got a powerful primary is the fishing rod with the fishing line 0,18-0,20 mm and a float capacity which depends on the activity of live bait. If the hunt is on for pike, the required thin metal leash with swivel and clasp. The resistance of the float should be such that the bait could pull a snap, but not sink the float. Fishing is very active and is that the bait is placed in a selected point near the grass or submerged wood. Expect a long bite not worth it, better to frequently change the point of fishing. Usually the predator goes immediately when the bait hits under his nose.

On large bodies of water and in all cases when it is required to deliver the bait in the far distance, have the advantage of bottom snap. The most common use of a feeder rod, as the bait anchored on the bottom at the snap of be offended big pike and Zander. Small pike and perch to catch a hot method using a float snap-in. While running catching the profitable use of fry and drowning bait. However, large pike are often tempted it a drowning, but a fresh large live bait, or which lies at the bottom, or very slow drifts. If you want the snap-in, drifted, then it include the float is heavy. In this case it makes sense to use a powerful rod for long casting.

The most versatile is to recognize the option of using a powerful clearomizer rod of a decent length with a capacity rings and coil. With such gear you can fish and near the shore, and at a considerable distance from him. It is customary to call this tackle zhivcova.

The most simple and reliable zhivtsovy rod is obtained by taking the inexpensive fiberglass rod, because the rod of him though heavier, but they are more durable and flexible. When pike fishing the rod will be best with the test up to 200-300 g, though it is possible to do a rod with a test 100 On the spool, it is desirable to wind meters, thirty or fifty of the line, because there are cases of breakage of equipment, and large trophies often have to draw out. Because fishing often occurs among aquatic vegetation or on its boundary, it is necessary to ensure that the float is not clinging plants, bushes and other obstacles. The body of the float is machined from foam or cork, then drilled through, the hole is skipped and the bottom line shut up a stick of bamboo. Bamboo practically does not swell in water and are very durable. Balsa as a material zhivtsovy float is much worse because it is less practical, especially in late autumn.

Fishing for carp on the float rod

Slightly worse the second float with a single point of attachment to a fishing line. Worse by the fact that heavy float often slide along the wire and sleeve it badly keeps, so you have to make the snap-in locking devices and Berlusconi. Various sliding designs of the floats is applicable if the depth of fishing is a few meters, they are applied in the fall when fishing from a boat on the track and the pits. When fishing in very shallow water that is stranded in 30-50 cm, where pike and autumn, is, out, good transparent ball floats made of plastic. Such floats are convenient because they can be partly filled with water to increase the weight and reduce the drift of the buoy in windy weather.

It is important to choose the right fishing line. Relatively thin line will be less parasite in the wind and waves. As a leash, I think it is better to tie a thicker fishing line diameter of 0.4-0.6 mm. Braided fishing line is quickly confused baitfish, and the metal leashes, even the most subtle, pike recognizes correctly. As practice shows revcovery fishing gear, leash from the line, with a diameter of 0.6 mm is not able to eat even pike weighing in at nine pounds. Thick line is good for the fact that it is quite stiff and difficult movement of live bait. When fishing for perch leashes are not required. Leash length is approximately half the depth of a selected fishing location and the descent is adjusted so that the bait with all his desire could not reach the bottom.

As for hooks, I personally came to the conclusion that it is better to use single hooks. For pike I put the hooks to 1/0 or 1. When fishing for perch, of course, smaller.
The selection of sinkers is to pick it up the same weight when it resisted the movements of a particular baitfish. That is the role of weights is to ensure that paired with a float to keep the lure at the selected point of fishing. 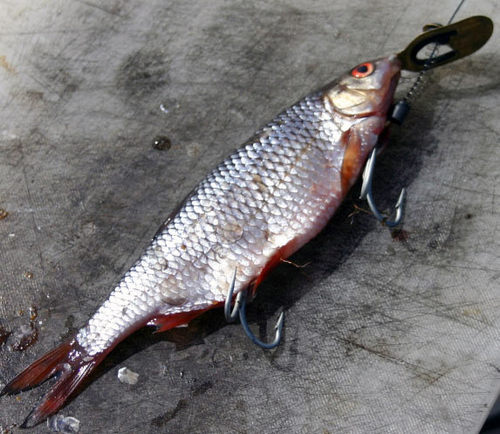 If baitfish are very small, for example, it verkhivka, small minnow or perch-fingerlings, it is best to stick a hook in his lip. After the bait is already on the hook, useful to put on the hook a small piece of foam or thin rubber to prevent “the gathering” live bait off the hook. If live bait is used the roach, which aims to rise to the surface, then I put it under the skin near the dorsal fin. If the bait is large in size, and the predator is not very large, it sometimes makes sense to use a snap of two hooks, one of which is located at the dorsal fin, and the second at the head. When fishing for fry – I often bait the hook with a long shank similar to a worm, that is “stocking”. It is especially advantageous to stick the bait for perch and redfin.

Fishing with the fishing rod zhivcova more reminiscent of the hunt. It makes no sense to wait for hours approach fish. Much more interesting and more productive to omit the snap-in selected in the point of fishing, if no bites, then you need to immediately change the point of fishing. Small pike bite is usually immediately, provided that the bait is planted she very gently. Most often the bite is reflected in the fact that the float several times, “nods” and begins with a constant speed to move toward. After the float will be held 2-4 m, he usually stops, it means that pike is beginning to swallow the bait. After a few seconds you can hook in and hope for success. Perch need to strike immediately.
When fishing bottom snap-in is very useful to periodically perezapisi snap to probe a large area. It is also useful to carry out artificial transactions and perezapisi snap in one direction or another. Active fishing determines what to take with you on fishing you need a fishing rod. A catching way, and so you need to be serious about the outfit. Definitely you need to have not only zevnik and extractor, but podsachek, and cook.

On waters where pike had left the coastal area, the tactics of fishing is changing. You have to methodically throw the bait in the selected place, after carefully examining the underlying terrain. In this fishing really helps the experience gained in previous years on past fishing trips. The fact is that if in some deep place even five years ago was caught a pike, almost certainly in this place and is now another predator. There are literally applies the adage that “Holy place is never empty”. After the capture of this pike, it is sometimes a day and sometimes through the week is another pike, and of the same size.

If to speak about the time of fishing, then the closer the winter, the more peak of the bite shifts at 10-11 am and 2 PM. Of course, sometimes it bites and before sunrise, and late afternoon, but the bite is already starting to be accidental in nature.

In addition to the float and the bottom snap, very effective equipment that you can fish from the boat. This and night fishing, the conversation will continue next week.