Each spinner, at least once dreamed to come, and the place was wholly a pike which would have sat and waited for his bait. Based on this desire, one solution is to lure the pike in a certain place.

Each fisherman has his fishing secrets, its own “flavor”, which he never shares with others. All that is acquired over time, through wit and observations. 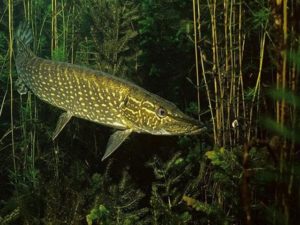 One day I was wandering with a spinning rod on the river Bank, which was not distinguished by its great width, in search of pike.

About where to look for pike, article is on our website.

On the shore there were a lot of “faleristov”, which threw the bait into the water and checked their gear, waiting for the sound of the alarm bite.

Soon all gone, and, passing one of the places that had previously been occupied by, I noticed the fry, which packs hung around the bait that just fell near the shore. In the same place at once, near the reeds, came the pike on my lure and quickly found himself on the shore.

Then I remembered about the one habit of a pike, which I wrote in the article “on pike”. She often ambush near the habitat of fry, which she is rarely interested. But, it attracts other predators, such as perch, which the pike will not hesitate to dine.

The next exit with a spinning rod, I went already prepared for luring pike.

At home, I crumbled the bread, added the breadcrumbs, the bait (any will do), meal. The proportions are not important, only it was more bread, the rest for creating “turbidity” in the water.

The river spread out and went spinning along the Bank in search of pike. The most interesting places, I took the prepared mixture, and, a little soaking in water, thrown near the shore in the grass, reeds.

After a couple of hours on the way back, was amazed by the number of fry near the place where he was thrown “bait for pike”. And, almost every second place, attended by pike, who reacted quite rapidly to everything that reminded her perch.

Thus, it appears that prokormil fry, I “lure pike”

Especially this bait for pike in the fall is valid.

So, with the usual observations, and there are small fishing secrets)