Search of fishing places on the river Shuya in Kareliya.

Second of July 2018го, despite the rainy forecasts, we with Oleg went along the lake of Ladoga to the North. 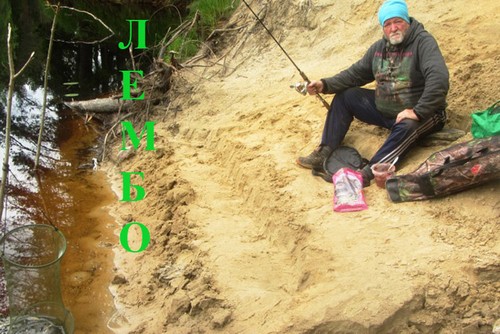 The first (soft) warning of the weather forecast we have made Lembolovsky heights in the area of Orehovo. There at a height of 172 meters above sea level, the clouds hung at the level of the hills like mist.

Breaking through this veil, we ran further. Instilled a great respect for the construction of a new road for Priozersk. Move huge amounts of soil, rocks explode, forming a reliable coverage.

The next key point was the cliff behind the town of Lahdenpohja. The road passes through rocks and narrow crevices. This pass is called the “Gates of the mountains Karelia”. 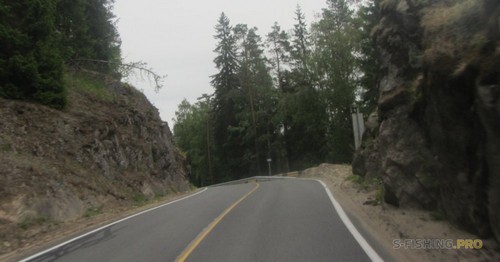 The “Gate” starts on a very difficult piece of the route: steep turns, steep climbs, steep descents… Sometimes it all comes together: a sharp turn on a steep descent! COOL!!!

Adrenaline road. And we crossed without problems thanks to the driving skills of Oleg.

In Sortovala coffee we ate lunch not very high-quality and moved on. I made out the coast of Martovickogo RAID. A couple of years ago we passed through here on the boat the Whaler.

Then we turned off the highway on a “road”. 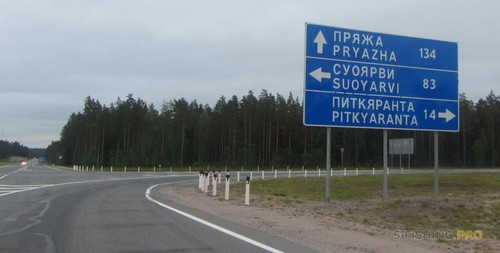 Oleg long grumbled:”I will no Longer ride on the way!”.

We stopped in the town of Suoyarvi. 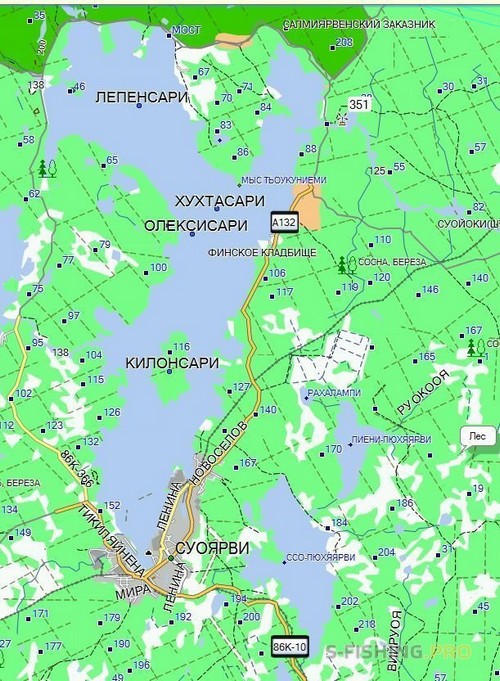 and found a good ground on the shore near the shallows. (point 351)

In that place the river forms reach with a kilometer diameter. 2 ducts flow in and out from the reach through the rifts. On the map they are marked as “waterfall”. Obviously the waterfalls they

be at low water. 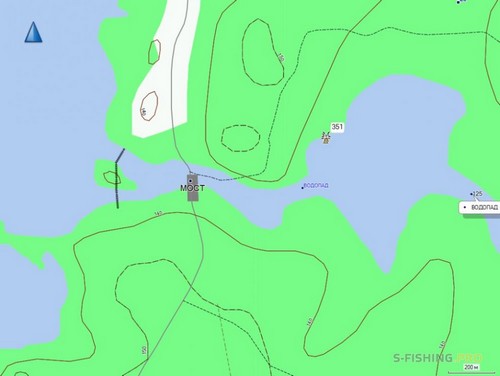 I first throw in the rolling felt between the stones sharp bite and beating the fish. Joy that was! Thought:”Trout!” Was ECOSOC stormovik. 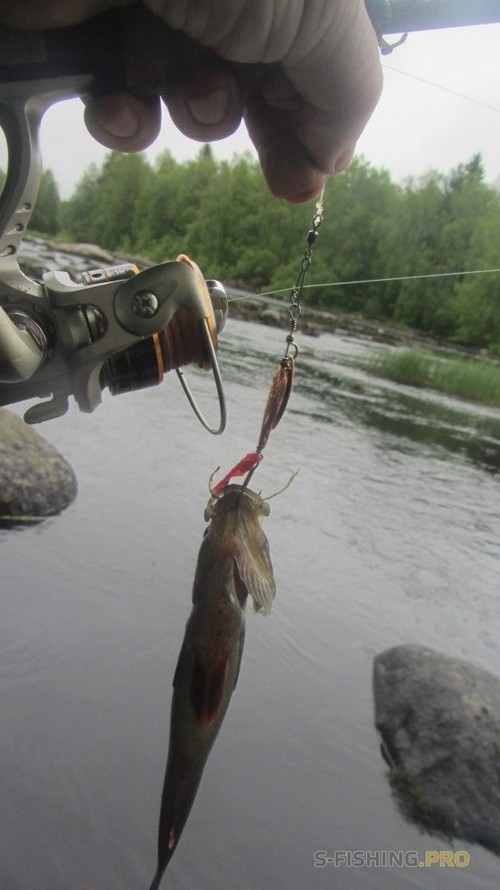 Them there was clearly school — pecked active. Colors they were like their smoked counterparts.

To me they were not needed and I cease “training”, went to Oleg. Nephew tried to catch on a float. Success is not pleased:” Bleak…” 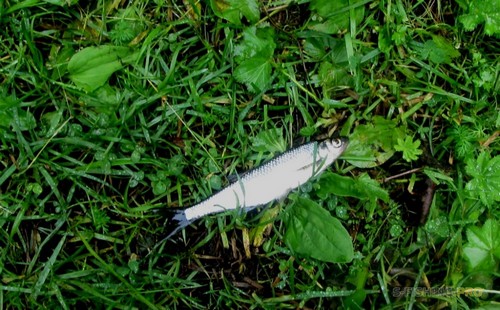 To change the place it was late and we set camp at the edge of the clearing. 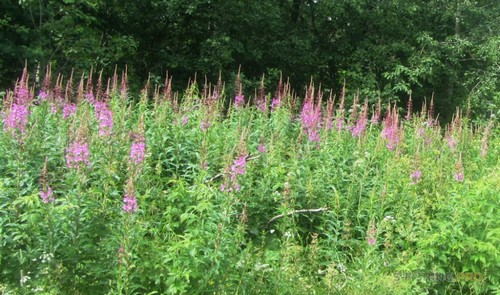 Behind the trees near the shore were a couple of good sites. The tent we had finished to put in the dark. 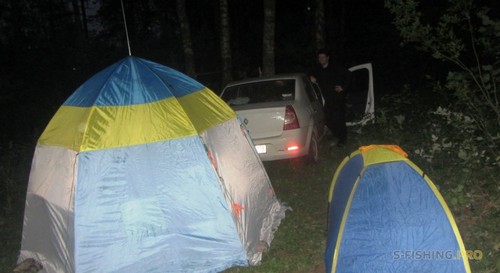 Things we already threw in the promise of “Meteonovosti” rain. We dined to the sound of drops and the crashing of lightning. “We had” and so the rain did not bother us. In this bed, I had revealed a lack of my tent: zipper door is on the slope and perfectly passes water without delay, and the awning above it I forgot to hang!..

In the morning, dry the tent, we went to “seek happiness” on the river below the town of Suoyarvi.

Oleg to facilitate machine sent me across the field on foot. Wild flowers is lovely! 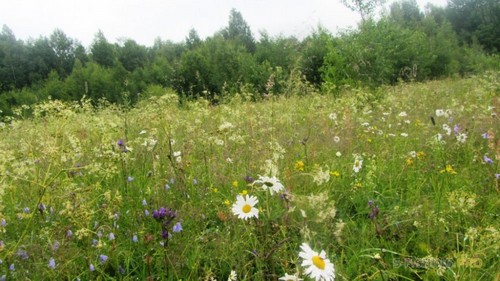 But not everything in this field is pleasing to the eye. Sometimes came across cracovii heap. 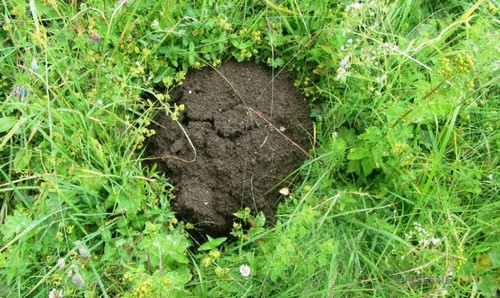 And certainly not pleasing to neither the eye nor the nose of the cow dollop. 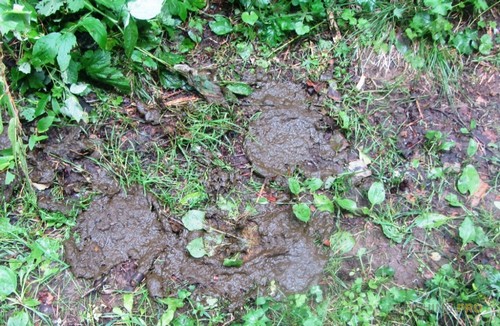 Well that night we ran into those mines! I remembered the poem:”how nice is Motherland!”

In the city we drove to the area and I have photographed local monuments. The whole complex was dedicated to the heroes of the great Patriotic war. 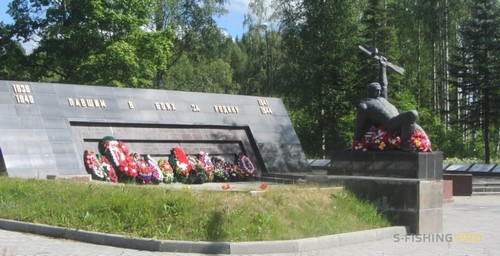 Between the birch trees were standing quietly not forgotten Lenin. 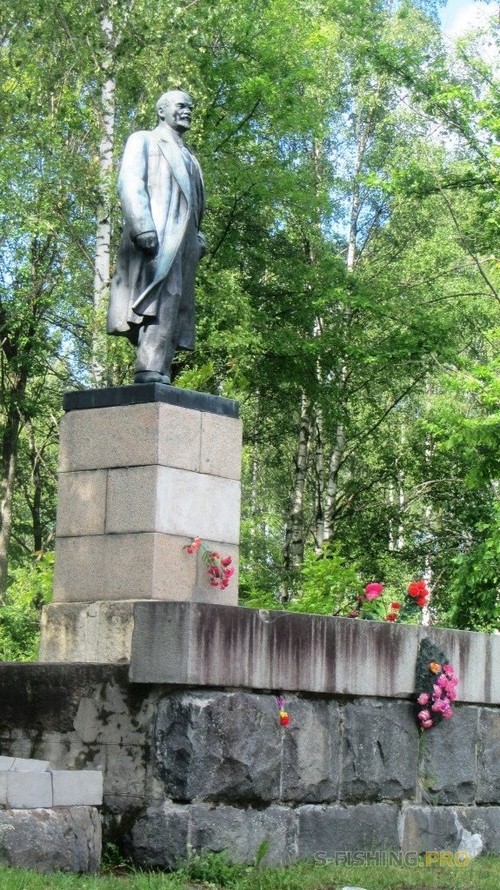 Leaving the city we stopped at our favourite recently vozvedenie sign of the city. 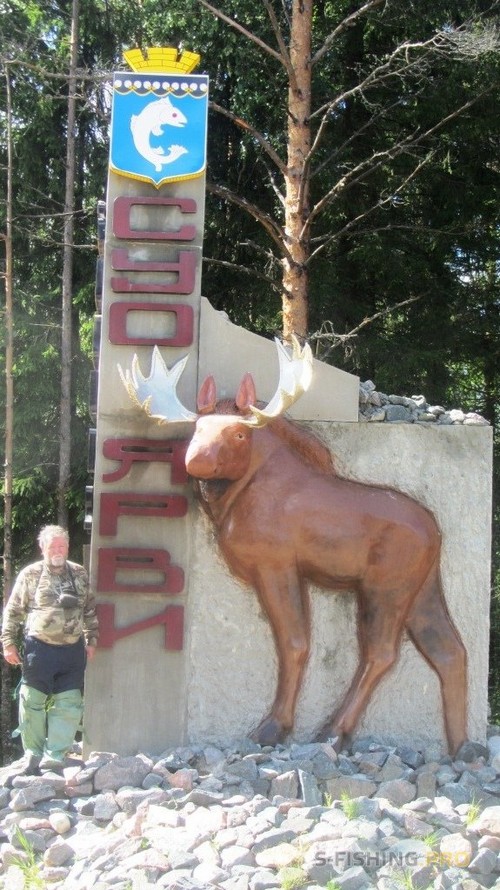 Builders know that people want to take pictures at this sight, and made a comfortable stage. 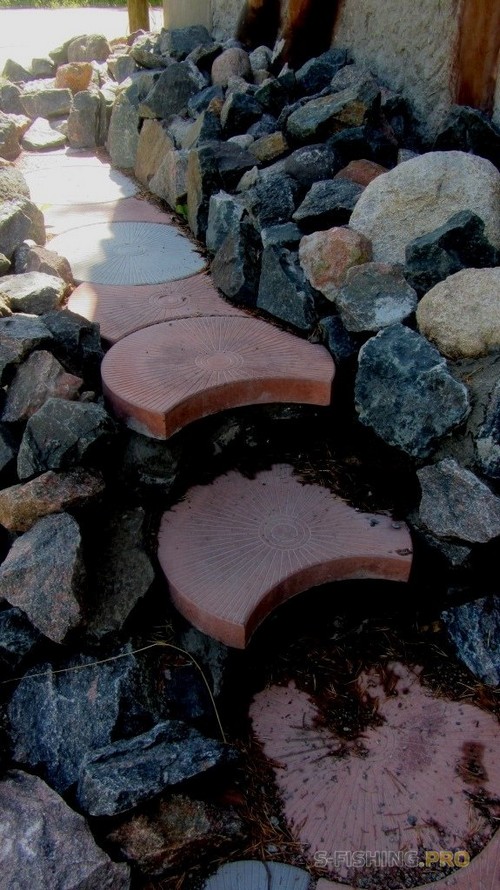 I not only took pictures but tried to feed cookies moose, forever forced to stand at the entrance to the city. 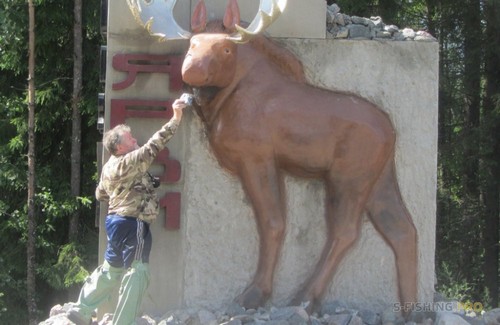 The moose apparently got tired of the cookie — turned. At the entrance to the city was a gas station with space fuel prices. We have gone on. 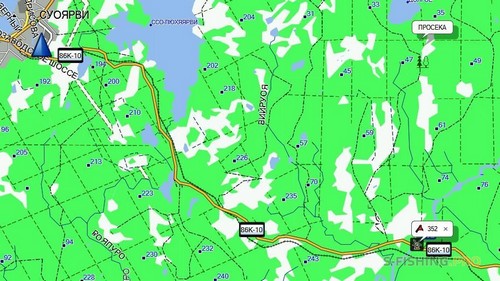 On the bridge over the river Shuya we moved in the direction of Petrozavodsk. After a hundred meters after the bridge is an abandoned post of GAI. 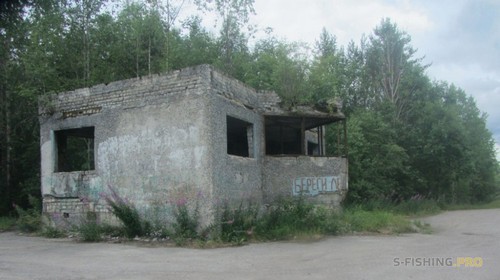 In front of the building on the other side of the highway through a large but shallow puddle led off into the woods primer. A hundred meters on the dirt road brought us to the gorgeous area. On this site I would be able to hold a tourism rally for 200-400 tourists. Point 352. 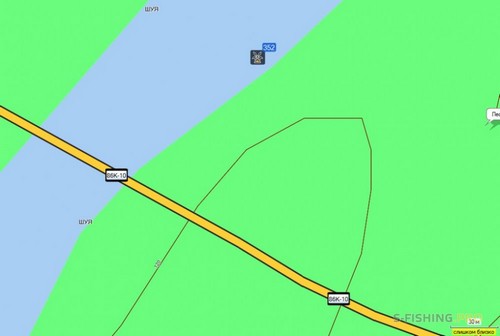 The place looks like a similar place in Leningrad region and is clearly popular. Here garbage on this site than our sites are much smaller. And the bench is not burned. The “cultural capital” people, less cultured than the Outback. 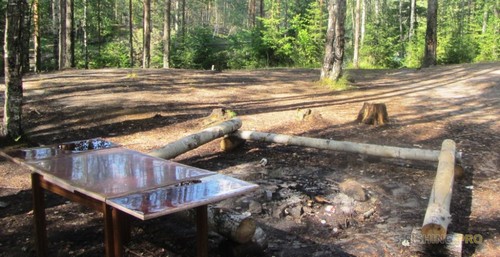 On the descent to the water I use the entrenching tool I have equipped a fishing. There in the water near the shore I stuck the two fliers. Near the water, and I’ve undermined this and trampled trail between the flyers not to slide down into the water. In slope, I dug a platform for sitting like chairs and

have polil back seat from the boat. On one side I put the cans of baits: worms and maggots. On the other side I put a bucket of bait zameshennoy “Large roach” from the company RUBICELLE. 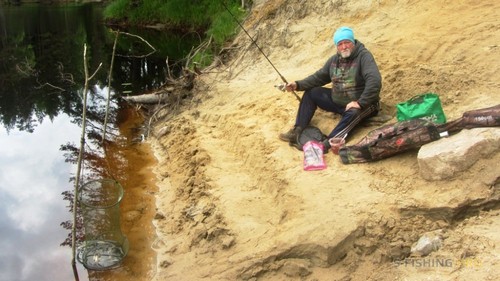 Filling groundbait feeder feeders, I threw two donkey. After a few casts I determined that five meters from the coast is the edge of the fairway to a depth of 6-8 meters. Here at the edge I began to throw the tackle. I was severely tormented by mosquitoes and midges. Quite by accident I found in the package with the cloak working cap. She very well covered the ears, otherwise, they would have me burst. 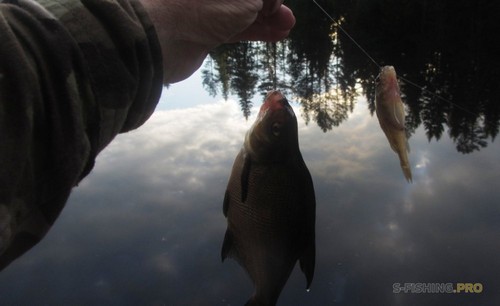 After four capture, I was forced into a tent in the rain. At 7 am I got up and began to drag the fish. In addition to the market I took another rod with a float.In the fall the donkey trough formed a cloud of bait and there immediately begins to dabble bleak. It was actively enough

By ten o’clock in the morning I had two dozen skimmers-grams at 500, and with every kilogram bleak. All of them surprised me because of its colors. And skimmers and bleak had bluish-black backs and flanks of their gleamed dark blue tint.

Oleg woke up and we began to gather home.

I was approached by the motorboat of a local man, the mother of pikes, perches and all the predators are not willing to bite. He said 300 meters below there is a roll, but… today, nowhere on spinning does not bite. For local a car came and he went home dissatisfied.

By noon we had already left shosse when the site moved of filling a large family car. The head (grandfather from Belarus) came with his son and his wife karelka. Lady brought with him two children and father-in-law to relax and go fishing where it was in her youth. I told the men the information I have about the current fishing and we with Oleg have gone home in the direction of Petrozavodsk. This way was slightly longer, but on arriving in Petersburg we are convinced that this way is much more profitable on a good road getting faster and more comfortable.

So we made up a pleasant and useful circular tour around lake Ladoga.