The Oka river originates in the center of Central Russian upland in the South of the Orel region and with a height of 266 m above sea level, flows first South to North then from the West to the East where in Nizhny Novgorod merges with the river giving it the strength and power of the largest European rivers. The length of the Oka on sailing 1990 – 1500 km, the basin area of 245,000 km2. Along the way, the river absorbs water of many rivers and streams. The main tributaries of the river are (from upstream to downstream) Ugra – 447 km, Moscow-river is 502 km, Momma – 614 km, Klyazma – 547 km. the Eye carries its waters for many centuries. In its transparent waters once came to spawn heavy Beluga and sturgeon. Came, and rare in our time, the fish inconnu. Otmetiv the eggs they slid into the Volga and further to the Caspian sea. Pushed, but not all. Prompt our forefathers and ancestors had time to get their, not perfect according to our ideas, tackle more than one tonne of fish to his Royal table.

Now oke there are about thirty species of fish. Representatives of the sturgeon family (Acipenseridae) sturgeon (Acipenser ruthenus). Found this fish quite rare. Water pollution large-scale dredging works in the river channel, destructive fishing (in the past) has put this species on the brink of extinction. Favorite places sterlet deepest parts of the river with a hard bottom. The sturgeon feeds on benthic aquatic animals (larvae of mayflies, bivalves, worms, etc.) are most abundant in the fish fauna of the Oki family of cyprinids (Cyprinidae).
The basis of fish flocks of the Oka are: bream (Abramis brama), roach (Rutilus Rutilus) and silver bream (Blicca bjoerkna). The share of these types over two thirds of all fish biomass. They are the main prey of the large army of anglers. Until recently (late sixties) the basis of the catches of anglers were Podust (Chondrostoma nasus). Small schooling fish in such abundance were carried out in the Oka and its tributaries, it was possible to catch (in the shallows). The peculiarity of this fish was not only their number but also unusual for cyprinids, the position and structure of the mouth under the snout, in the form of a slit with a sharp lower lip. Now Podust in the river is as rare as a starlet. The reasons for the reduction of its numbers is not fully understood because the flowering of this species was period of severe pollution of water basin of the Oka (50-60 years), when treatment facilities almost was not, and the industry developed rapidly dumping into water bodies tons of pollutants.

All of these types – i.e. readily prefer fast current and spawn on rocky shoals. The blow was inflicted on them probably not so much the pollution as the destruction of spawning and wildlife habitat. 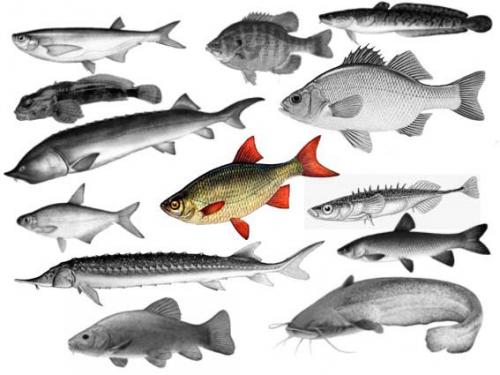 The perch family (Percidae) are presented in oke four species: perch (Perca fluviatilis), pikeperch (Lucioperca lucioperca), Bursch (Lucioperca volgensis) and ruff (Acerina cernua). It should be noted that the Bursch as Oka fish nowhere in the literature does not mention, but oke is, at least in recent years found and how I got here is unknown. But ruff, who earlier were so eager anglers on the hooks not allowing him another fish almost disappeared, and the one that was left crushed body and on a fishing hook in no hurry. Makovye (Esocidae) and to other Russian waters represented by one species – pike (Esox lucius). For Oka pike characteristic color of light colored, cropped, and a thick body.

Family cod (Qadidae) and catfish (Siluridae) are represented respectively by the burbot (Lota Lota) and catfish (Silurus glanis). Usually these fish in the eye do not grow large: for burbot water is too warm for soma cold. In the bays and oxbows of the river are abundantly rich in aquatic vegetation are the members of the family of loaches (Coditidae): loach (Misgurnus fossilis), bullhead (Cobitis taenia) and loach (noemacheilus barbatulus).
And on the rocky shore under rocks hiding sculpin (Cottus other species) representative of the family of bulls of sculpin (Cottidae).

All of the ichthyofauna of the river is like a top of a large and complex pyramid otherwise called a pond ecosystem. All levels of the pyramid ranging from bacteria and protists, including algae, large and small, and all that in them is moving and crawling, or even free floating in the water column, all eating each other and decreasing in body but increasing in size as you move to the top, all of this is a system of biological self-purification of the pond. The system of biological self-cleaning of the reservoir (sbsv) is likely the body is able to produce significant biomass and to overcome ailments.

However, like every organism it has limitations. The first signs of sickness of the body – reducing its biomass and the most highly organized part.
The decrease in the number living in the pond species or reduction in their numbers is evidence that the limit of capacity is reached sbsv, require urgent treatment, i.e. the establishment of normal healthy climate for the whole ecosystem. An example of Oka river there is a private example of the particular ecosystem, but it is typical for the whole Russia and not only Russia.