Attitude fishing had been very positive. Leaving from the Rostov region, Belaya Kalitva, at 8 o’clock to 11.30 a.m. was already in place. Catch was assumed in a certain village or the village of Maloulbinskoe. Local beauty with the Majesty of the don river just admired.

It is also worth noting about the good quality of the road in the direction of Volgograd. Yes, it is not wide, but the track loaded to call as it is impossible. There was one stretch of 4 kilometers on which the works were produced. 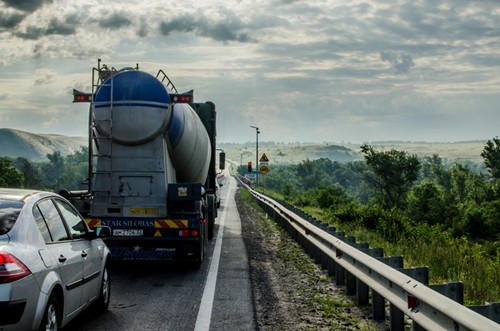 Almost arriving to the place are aware that water too much. On the left picture you can see the formed Bay, which is not supposed to be. Well after 300 miles of course it was determined to proceed to the campsite and prepare it for fishing. 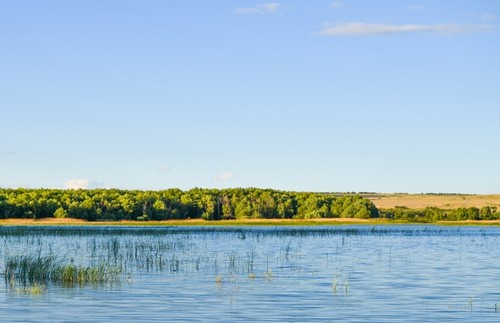 The weather was in early June windy, a strong pressure drop, but not hot. Beauty inspired confidence in an active biting of large fish. We actually went for the carp (carp) and bream. The tackle is choosing a sufficiently powerful: the pole test up to 160 gr. with a length of 3.6 meters, braided cord with a diameter of 0,18, 0,16 leash, hook 12. Catch I planned it bream. Feeders weighing 60 grams. was quite enough. 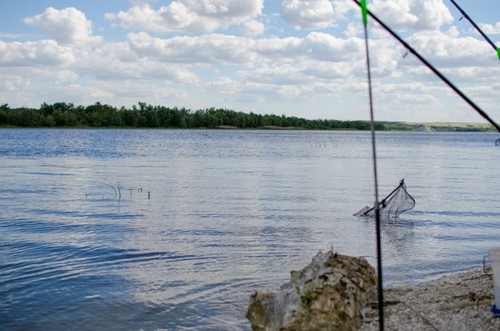 Cloudy with a massive rain clouds avoided us, which was good for us. Because the road on which we traveled here leaving the track after rain ago we were not allowed to. From the very first casts, it became clear that the fish eat. The bite was instant, but not particularly strong, because the bite is mostly small things: the roach with his hand, the same bream, rarely proskakivala bream also not more than the palm of your hand. An hour later, a fishing catch, it was laziness. 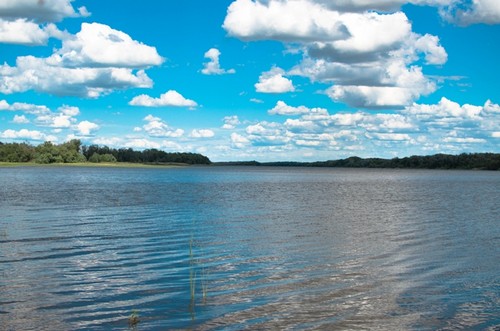 Yes beauty is amazing. Calcareous mountains and the coast walk which is a pleasure, quickly catching up the appetite. Brother trying to seduce sasanika, but so far without success. Polivaet carp, but should recognize major from 600 grams. 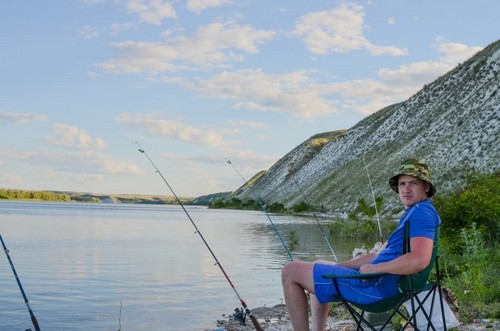 One of the limestone hills. 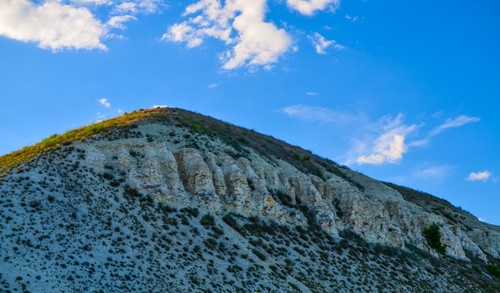 Over time, our place began to catch up with other anglers. Mostly soratniki. They caught a fairly simple gear: conventional inflatable boat with motor and without, with half a dozen rods “crocodile” with a massive single hooks impaled with the beam of the worm. Stood in line all night to raft along the river. 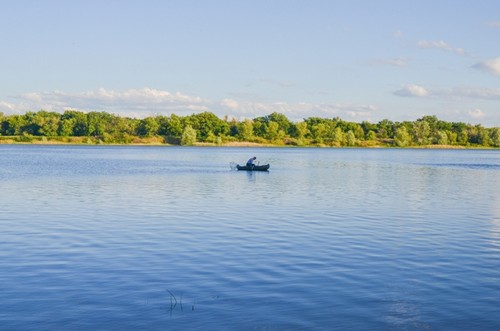 Towards evening the weather improved. The wind died, the sun hid behind the mountains and the temperature dropped to 17 degrees. 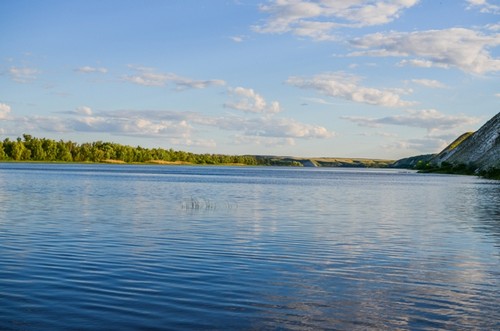 In the Gulf often splashed big fish. A predator chasing a frequency incredible. Flocks perch squeezed fry to the shore, where colorfully with him understood.

Fishing fishing and want to eat. Zamarinovat barbecue, began to prepare the coals for cooking. The wood chopped and the fire is dissolved. 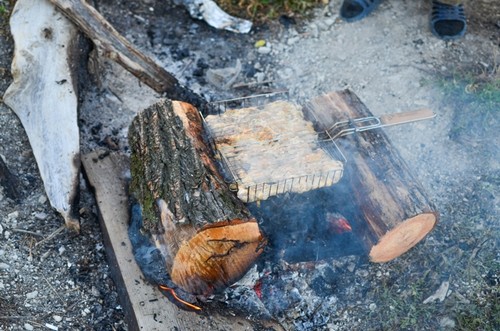 Chicken kebab is cooked fast enough. Sliced cucumbers and tomatoes and spread out on the table. What flavor! 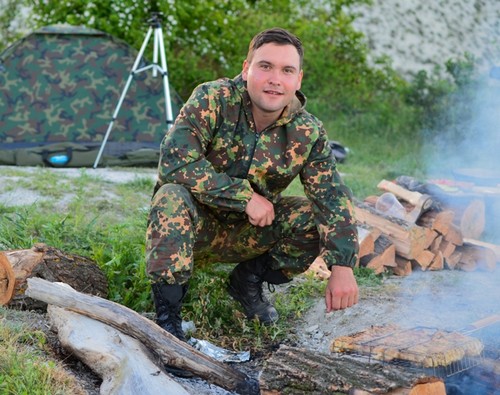 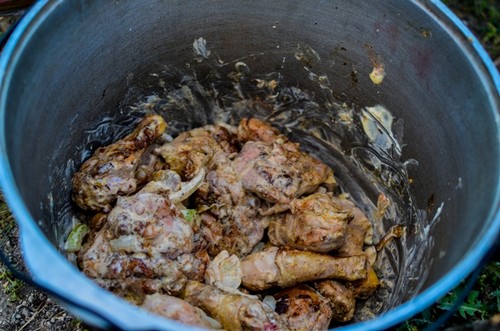 Summary of fishing the first day was sad. Kilograms 3 small things that you can catch was plenty. But for home on zhareha will go with pleasure. 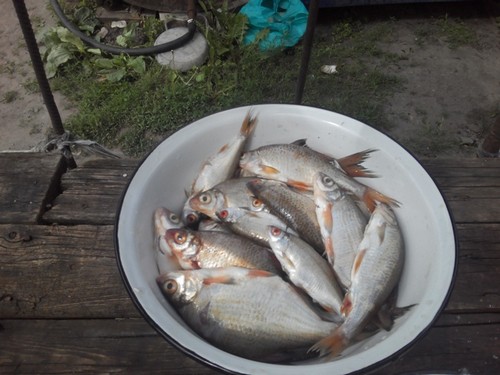 Of large fish bites was not a we are not the neighbors of the fishermen. After dinner, we go to bed in the hope tomorrow the bite of a large fish…

In the morning waking up in a tent from wild cold we were surprised changed the weather: strong gusty wind, overcast, temperature 7 degrees, we were quite happy. An hour after rising (6-00) began to drip rain, all present fishermen quickly began to gather to leave this place. We also did not want to stay here for a week to dry out the road.

As a result of normal fish — 4 large carp. 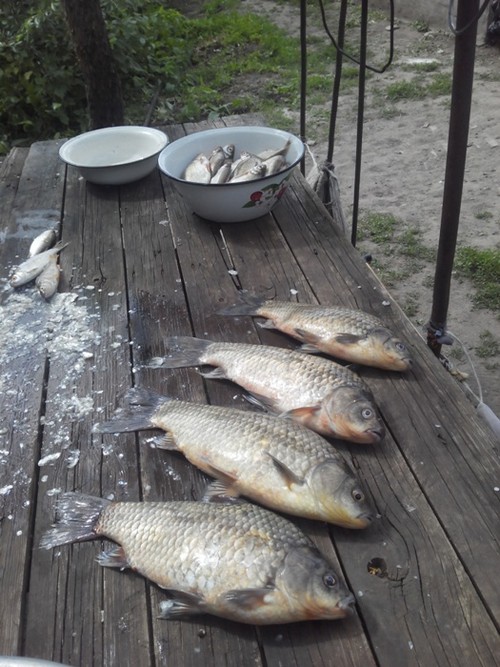 The beginning of June (2), and the fish in particular carp and even not from spawn. By the way, on the Seversky Donets river caviar in crucian carp and white bream was gone.

Share in the comments your successes fishing on the don river in the Volgograd region.