This reservoir on the river Ucha is a favorite of many anglers to the pond. There the shores are indented by deep bays and over a large area is covered by coniferous and mixed forests. North shore, especially in the area of Tartu Bay wetland sites, from the snow sticking out of the dry reeds.

The depth in this part of the reservoir is small, and catch there are mostly bass, perch and roach on the jig. Great value in this kind of fishing is finding fish. Usually in the middle of winter begin to catch the output of Yur Bay and then move along the shore towards the channel.

As a rule, the day the fishermen could not find a single flock of bass, though not very large. But it happens that in fishing skovorodnem caught a dozen perch. Roach are biting less often, however, during protracted thaws used to set out a good bite of this fish. 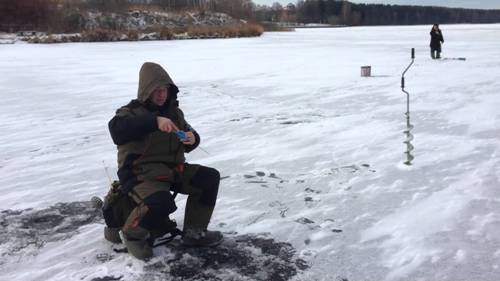 Bass in places like wormwood. In that case, if the moth bites no need as to use attachments larva burdock moth, spitted on the hook mormyshkas one striker or two. The frequency of vibration of a lure must be increased and the amplitude reduced.

Those who know how to fish with baitless jig, in gluhozime come with a big catch than those who catches with a planting bloodworms. It has long been observed that the fish begins to show a strong interest in the jig, if nod makes from 200 to 350 oscillations per minute. There are a number of short barrel and tapered tungsten structures “Jack”, designed just for the game with a large oscillation frequency of nod.

In this case, the fish reacts to the jig are generated by the vibrations which it picks up the touchline. The feature of the game on a baitless jig is that it as it vibrates, remains in place. At the same time valid smooth moving the jig up and down. You can also maintain the catch on a vertical jig type “ant”, “osinka”, “oralce”, but the hook should wear the beads, which, striking against each other, emit the characteristic sound that attracts fish.

Fishing rod for fishing with baitless jig should have a long handle. The nod clock is made of metal springs, and its deviation from the horizontal plane in the game should not exceed 1,0–1,1 mm. 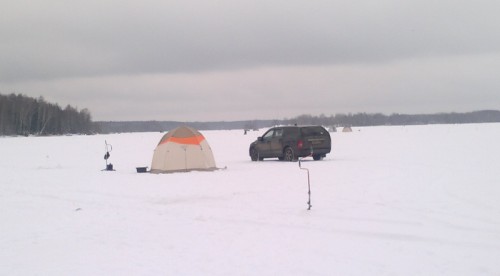 Fishing bream and white bream on the float rods are positioned on the flooded riverbed Teach, which is closer to the southern steep Bank. With a good long term bait of the dry mixture of the type “Red fighter” mixed with bloodworms, regulars of those places almost always manages to catch fish, among which is not uncommon and large breams. Also on the bait sometimes are looking good roach. It should be located in areas with a depth of 6-8 meters. The best time of the bream bite is early morning, before dusk and at night (but tents on the ice there to put prohibited).

Garliclike in gluhozime in these places are rare, although we had to watch as it was intended that Aksakov Bay winter caught a decent pike and perch.

Of the regular anglers at the reservoir there are often a few of besnilian that catch in a plumb line on a massive white spoon with a planting on the hook for the little plotnicki or ruff. They drill wells in areas with a depth of 6-9 m. Catches large perch, Zander, pike rarely. One day we saw a young man, who was fishing in a plumb on the great white kastmaster. It was lunch and they had already caught two bass weighing approximately 300 g and one perch under 600

As for predators, in this period of gluhozime deserves the most attention catching burbot. It does not require large expenditures of energy. Postawski must be placed along the wooded banks of the South in the direction of the Sunny Glade, sometimes closely approaching the underwater riverbed. The bottom is sandy-stony. The plots and like to keep burbot. Instead of a tee is recommended to put a single hook with a long forearm № 1/0-1. The best nozzle – ruff, lowered to the bottom. However, in order to achieve success at fishing, you must devote a lot of time to the detection of burbot trails. This activity can be interesting even if you are permanently settled in one of the many surrounding resorts. And then catching burbot, this unusual fish, will give you a lot of joy.

Where to perenochevat Pyalovskie on the shore of the reservoir

In addition to tourist camps and boarding houses, where in winter you can find loose for the night, there is a recreation of the company “Rybolov-sportsmen”. It is located in a Sunny Clearing and has the same name. To get to those places by bus from the train station katuar (Savelovsky direction) to the village of Aksakovo, which is the destination of the route and is located on the shore of the reservoir, or personal vehicles – the district from 30-40 minutes drive away. Fishing vouchers.