The river near Tarusa not so deep and wide in their lower reaches, but the side of her different kind of beauty. Since the second half of August until late autumn, here you can find a lot of beautiful and convenient places for fishing on the bottom gear. The frequent catches of large bream, IDE, sometimes catching bersha and rare in our days of Podust. 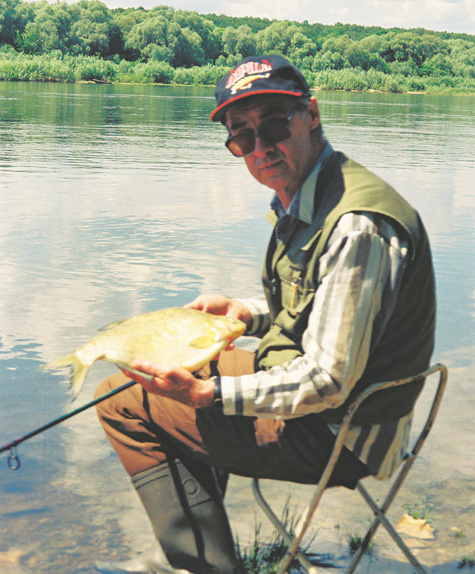 The main object of fishing for donochnyj here — a rather large bream. Oka bream adheres to places with more or less pronounced relief of the bottom is usually rocky drop offs into the deep, where the main strong current borders more moderate. It is in these areas, sometimes at depths not exceeding 1.5–2 m,there are ledovyh packs.

On the bait by smell

River bream due to the development of the sense of smell is easier to find food by smell. After a pass from the trough the most heavily spreads the smell in the first 10-15 minutes, and bream during feeding ground in the coastal zone is the bait. It should be borne in mind that the Jumbo is most often fed alone, and smaller birds — in small flocks.

Depending on weather and other conditions, the outputs of bream in the coastal zone for feeding can vary markedly by age group. The largest bream, usually appear on the tame places in the evening dusk, the night to 1-2 hours in the early wee hours. In September, with cold water in preparation for the upcoming winter, lutoboka refreshed and more active. During this period, they adhere to the wide river stretches with a sandy-muddy bottom and the Parking lot they can be found more often near the channel to a depth of at least five meters.

The practice of catching bream in the area of Tarusa shows that the local bream very difficult to catch in the wiring. He usually responds better to quietly lying the bait on the bottom, rather than the one that demolished pretty quickly. Well, breams bottom fish and this fact must definitely be considered when choosing gear. In this sense, bottom fishing rod is the best option. The main feature is that when fishing on a strong current gear feels quite heavy loads. Feeder and spinning rods for donok so you should choose a weight test of at least 120 g, that is, designed for casting with heavy feeders.

The rod-type Feeder is an effective tackle when fishing for bream on the course. Catch them as you can with the feeder and sinker. The role of the alerter bite it fulfills a removable flexible tip (quivertip). However, this tackle is still more suitable for slow or moderate currents. For example, when fishing on a calm river reaches. Besides, its use is limited by time of day — during daylight hours. Night need other donkey.

Bottom fishing tackle when fishing on the course also has its own characteristics. When choosing gear is preferable to the two handed rod allows for long casts where the point of fishing far from shore. For example, when the Seine estuary part of the river is separated from a wide band of shallow water. When fishing with spinning lure in the upper reaches of the Oka I use a fairly powerful inertial and spinning reel.

In a snap of the bottom rods should be used as the main test the strength of a fishing line diameter of 0.30–0.35 mm. Braided, less stretchy, not very suitable, since cutting has to do the sweeping and quite sharply, resulting in frequent breakages fish lips. In short, the scaffold should have a good damping. As for the leashes, they should be less durable than the main line. Some anglers put too strong leashes of braids that deep at the toe leads to the loss of snap. In order not to waste time perenashivanie snap in the process of fishing, it is desirable to have a ready-made leashes. The loop the loop can quickly attach to the main line. Leashes are attached as below the trough (sinkers) and above.

Pike fishing in June on spinning

As you know, the feeders are open, semi-closed and closed. I usually take a few different types of feeders. The reserve is necessary because sometimes, in the case of a hook, with a feeder you have to say goodbye. Especially in the case when it is tightly stuck between the large stones. The same can be said about gruselig. When fishing in strong current I usually use a flat sinker, it is better kept at the bottom, and where there are rocky ridges, it is better to use sinker type Tyrolean wand. If such sinker is after a pass between the rocks, just a few short jerks with the rod and it is freed.

Another important point is the ability to attach the leash. There are two main options.

1. The leash is attached after the feeders or sinkers that are free to move up the main line to the stop.

2. Feeder or sinker is attached tightly to the end of the line, and above 30-40 cm attached to the leash.

In the first case bite are distinguishable if the fish took the bait, sent to the depths or to the side. But if the fish comes to the shore, the bite may not be noticed. Moreover, feeling the resistance of the sinkers or feeders, the same bream throws the bait. In the second case, the fish feels the resistance, if she took the bait, heading to the shore. However, I must say that when fishing with heavy bottom snap-bream and other fish often samozaschita. In places with a rocky bottom the second option of installation is preferable — reducing the likelihood of snags.

As alerter bite most often used traditional bells (feeders rattles, which are attached to a flexible rod), and various kinds of sliders on the fishing line between the reel and the bottom ring of the rod.

Wire spiral feeders and the plastic open, as experience shows, good on low tide. Often, however, Oka bream can be caught in areas with fairly strong currents. In this case, the most appropriate framework heavy feeder fishing which has its own quirks.

Itself feeder weighs 30-80 g, and bait one hundred and more. Immediately prior to casting around the frame Obinitsa dense bait. Naturally, this requires a feeder rod high tensile strength. Usually this karpovici test 80-90 grams or spinning rods with length up to 3 m with the same test. To spinning reel is also very high requirements. It should contain not less than 100 m fishing line with a diameter of 0.30 mm.

Snap-in for the donkey may be performed as in the deep, and in the sliding version. In the first case, the main fishing line attached to the swivel at the top of the trough, and the leash to the swivel at the bottom. The leash from the line, the cross section 0,22–0,25 mm I do short, no more than 10 cm Thus, we have a blank snap-in that is designed to samorodnitsky fish. In the sliding embodiment, the snap-in is somewhat different. The main fishing line is passed through the center of the trough and is attached to the swivel that slides inwards-filled feed trough. For catching on a strong current I is usually higher trough put protivogerpetical — transparent silicone tube. As in the first embodiment, the leash is used short. When choosing hooks, pay attention to the fact that their sting was very sharp. At night both options enable you to catch large bream as Slobodskoy, and without it.

If you catch a sinker, the bait you need to add weight components. For example, gravel. Some anglers mix the food in the clay. Heavy balls safely reach the bottom and slowly washed away by the current. However, it’s all good in the daytime. Night to throw the bait to the desired point of fishing is very problematic. Another thing — the trough. Three or four bottom rods to allow bream delicious smelling station where they will be looking for food. And the closer the trough is located the nozzle, the more chances for a strike.

A well-prepared bait must adhere to the trough, not to fall out of it at the time of casting, not to fall apart when hitting the water surface. After about half an hour with no bites I recharge the trough. However, if the trough remained a large part of the bait, then you need to “correct” her consistency. I usually use a proprietary bait mix for carp fish, during the kneading of which add “good food”: toasted ground sunflower seeds or hemp, finely chopped earthworms, feed bloodworms, small maggots.

And finally, a few words about fishing for bullhead and other fish in the Oka donkey. Feeding the vending place, either way, you will be dealing with a variety of carp fish. In particular, when fishing for bream are often caught heavy IDE, especially during periods of cold water when all the fish prefers to feed from the bottom. It is important for orientation in the choice of tooling and the most efficient tips.

For night fishing, in addition to the configured bottom gear, you must have a tent, a comfortable chair, lamp extractor for extracting the hook and other equipment.