Casting distance easy bleszinki and technical capabilities to operate it is determined by the length and formation of the rod, quality rings on it, the optimal diameter and length spools spinning reel, as the front side of the spool on which the fishing line goes, and the diameter and stiffness of the fishing line and also the weight of the lure. 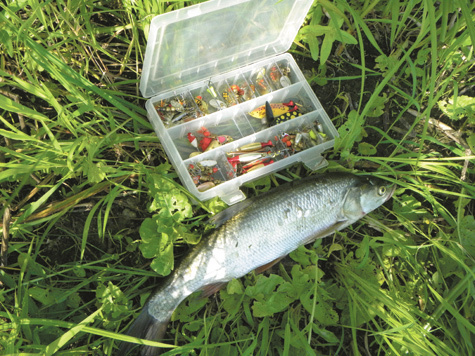 As for rods, such rods will be classified as ultralight or light from a test range for the first somewhere 1 to 7 grams, and for the second about 2-12 grams. The length of the first is usually to 2.1 meters, while the second does not exceed 2.7 meters. For different purposes it is also important to build spinning which can be both classic and fast. The last type of light spinning rods often necessary when catching falls from significant distances, and the size of the fish requires a hard confrontation.

Fishing line choice is largely determined by the efficiency of the entire spinning tackle in General, if fishing is conducted with a lure, which weight less than 10 grams.

Size range the modern lines in this case typically ranges from 0.12 to 0.16 mm, depending on fishing conditions. Under “soft” conditions — a small number or absence of hooks on the sandy or clayey rifts, fishing on top — you can apply the line very thin. This allows, when necessary, as far cast without overloading the rod.

In severe conditions of fishing, when the fishing line is often damaged on the rocky shoals or the bait you have to “tear” through the thickets of water vegetation, the fishing line need to put more sturdy. This helps to avoid unduly large losses of baits.

Produce the fishing line are divided into hard, medium and soft, there are intermediate options. Hard fishing line more durable, but spinning faster come into disrepair is less durable. In addition, they have a significant resistance when passing into the rings, since going off the spinning reel spool “spiral” when casting has higher elasticity than the “spiral” of soft line. When fishing light lures is a very significant factor.

The use of braided lines for fishing lures has its adherents and opponents. It is possible to use, knowing the higher strength braided line, fishing line with a diameter of just 0.08-0.12 mm. With them it is often possible to save bait at the toe, just straightening or breaking strong tension hook. Also, this scaffold give a great advantage when casting the specific weight of the lure because less “spiraled” than nylon monofilament. However, braided fishing line when playing a fish does not have the “rubber” damping properties as nylon monofilament, often at the last stage of a fight leads to a descent fish. In addition, when fishing with spinning lures very thin braided cord is twisted badly — needed extra element of snap — protivotankovaya that sometimes affects the results of fishing.

It is often necessary to hold small, lightweight lure close to the bottom at a considerable depth. But lying after casting on the surface of the water line during the retrieve will raise the bait up. Now on sale there is a sinking fishing line, which are commonly used in fly fishing for manufacturing leads to sinking baits. Such a scaffold is very easy when fishing deep fishing spinning reel for small lures.

Of course, for fishing spinning reel for light lures with thin line required instantaneous coil open type with a long spool (Long Cast), equipped with a good friction brake that enables the large load range to realize a smooth adjustment. The commonly used spool diameter spool up to 30-35 MMI gear ratio of the reducer 1:4 to 1:7. High-speed reel is necessary when fishing is conducted on top, for example, when hunting the fish, the bait needs to go below the surface, creating the front of the wave.

To prevent deformation and twisting of thin fishing line roller line bale needs to be large enough diameter, at least 10 mm, and it is easy to rotate. It provides the installation of a roller on ball bearings. A good coil spool is executed from high-strength aluminum alloy. With this fishing line spool comes off with much less friction than plastic — it allows you to noticeably increase casting distance lightweight lures.

As for additional comments to baits, anglers who do not have special tackle for fishing on small spinners, often used them on the standard rods, weighting the bait detachable sinker-head. Much less is hard core — it usually leads to an imbalance of bait and uncharacteristic for its size, the vibrations (noises) that scare away the fish.

It is desirable that the sinker head had the shape of lentil. This improves the dynamic characteristics of the Assembly, and completely eliminated its axial rotation, even at very fast transaction. With the same purpose the buckle in the sinker set above the center of gravity. To tees baits during the cast didn’t salescialis the line above the sinker ring clasp in the sinker is made as short as possible, allowing freedom of rotation of the spinner in the “hinge” of not more than 180 degrees.

Usually sinkers are cast from lead in the form. Their weight ranges from 0.5 to 12 grams. But lead sinkers have their own very significant shortcomings that affect the results of fishing. For example, when you want heavy load, a lead balloon will be too large compared to the spinner size. This negatively affects the game spinners and ulovistost the Assembly. The well-known “bulldog” grip perch. His fangs “bogged down” in the lead-head — high-quality cuttings will not work. The fish come at the last stage of a fight.

Given this, some craftsmen learned how to make sinkers-head of the oriented tungsten alloys, specific gravity and the hardness greater than that of lead.

For fishing with small lures without loading equipment is used, which is discussed above. As baits we apply the rotating light spinner with the numbers of a petal from “00” to “1” and usually a homemade Mukho-spinner and mikrobleski, the size of the lobe of the latter may be smaller than “00” as their weight is 1-2. 5 g Mukho-spinner link the tee, which is associated certain kind of fly — type fly.

Fishing with small turntables with no load on the current, in a thicket of grass and in the water column is not much different from the art of posting larger baits. Posting spinner with sinker-head are also well known: post immersion, direct posting, speed posting.

So it makes sense to consider the specificity of fishing on a spinning “non-traditional” fish. Do it for the experience of catching carp, especially since it seems available to anyone, even not very experienced spinningists.

Most of the carp bite on the spoon are in the summer from mid-July to late August is the period of maximum activity. The vast majority of bites big carp was on the border of the shallow water depth at the time of separation of the lure from the bottom. They felt at first like a soft hook, similar to when the spinner is included in dense thickets of aquatic vegetation. This was followed by a rush into the depths at a distance of 30 metres in a few seconds. Here is where you need a coil with good friction brake. Then begins the usual fish fish “on the circles” with the departure on the section of the pond where there is thick seaweed or driftwood — all that may prevent the success of the struggle.

Often carp “grazing” and in shallow water. There also have been biting, but much less frequently.

From the above it is clear that the wiring of the spinner when fishing for carp it is better to perform step — by lifting the bait off the bottom and making a few turns of the handle, the spoon should be re-put on the bottom. But this should be done slowly on a tight line, only slowing the speed of the winding mechanism. When the bait “will strike” at the bottom, the PREROLL should be accelerated and again to continue the cycle.

Of all the tested baits were the most effective blesna Aglia Long № 0,75 (from standard No. 1 firm Mepps) with the regular core and foil of Golden colour. With this spinner used lead sinker-head weighing 6-8 grams is the minimum load at which the petal spinner rotates during its free fall in the water column.

Had a bite and carp on lure Mepps Aglia № 2 without load when fishing in shallow water, also at the time of separation of the lure from the bottom.

After a take the fish usually all tee spinners were securely hooked in the mouth carp. The main thing was not to drop a clanger during playing.

In conclusion, I would like to wish the fishermen hesitate to learn to catch the “peaceful” fish — once during the day carp were caught more than pike, and at other times the largest trophy in the catch was… the white carp. Besides, the knowledge for new opportunities your favorite tackle real pleasure angler inquisitive, passionate, not mechanical.