In the 90-ies of the last century, very popular among the Penza fishermen began to use krutets is a small Prairie Creek, South of Penza, located near the village of Krasnopolye. Justifying the name, krutets wobble happily from side to side on the steppe, slowing its pace in the pits-stretches, for long periods of time resting on the ponds, they are well educated, and finally cut the water in the soil is steep, almost vertical banks completes the path and connects to the left side with his older brother, Hopper. 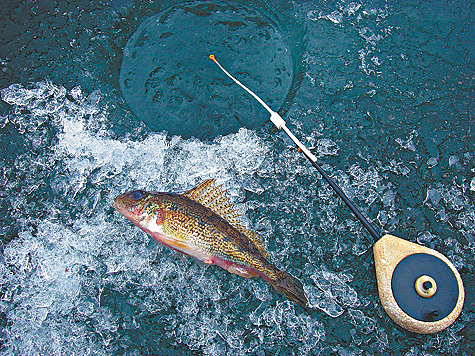 To Krasnopol traveled commuter train, and then wandered the reaches of the river. Perch on them to leave were not given, but painfully small in size – not more than 20 grams. Sometimes, though, there come moments of happiness, when the fisherman, hung sweetly from his heart stopping gravity, caution “sewed” hands in the air has not yet inflated, the water in the hole and the ice began to jump humpback handsome perch. But mostly only caught a trifle.

You had to have patience of my wife, when she, bending over the sink, meekly “treated” brought the whole catch, not disdaining any cleaning scales or removing giblets and even the gills. But the next day, on the table there were plates of aromatic, extremely tasty fish soup krutetskii of konichek. Great taste can be attributed to the purity of the water in the river.

Somehow bred a rumor that on one of the stretches of Krutets with incredible activity was caught… a large ruff. One day we went company down the river in search of a good bite and we met two village boys, dragging, external impression, weighty boxes.

When he asked them “caught Much?”, on one of them without bragging opened a homemade plywood box and we saw that he was almost to the brim full of ruffs. However, the sight was not pleasant: all ruffs because of the well-known Arsinoe mucus was a sticky mass of nasty gray color.

Honestly, I’ve never been a proponent of catching those prickly, snotty fish, preferring their small perch. But as they say, bezrybe cancer and fish. And the moment came when from a dead backlava had reluctantly to go to the famous pit near a large alder and bring home more than half of the box large ruffs, soldered together by mucus.

That year I had a long time to live alone. Wife at the request of the daughters moved to the suburbs to Tinker with my grandchildren. Expect her feats were nothing, and the idea is to get bogged down in deep arsineh snot, finally resisivity indoors, causing disgust feeling. In addition, bachelorhood obliged to take care of their own food. And then came the unexpected thought: it is necessary to prepare the canned fish! Remember: when bass was brought in too much, the wife did part of their perches canned. Poorly remembered early childhood in the beginning 30-x years of famine, when fish nalovlennyh father in the morning before work, mother and grandmother did an amazing canned food, wearying the fish in clay pots in the free Russian stove.

And remembering the lessons from friends of fishermen and the wife’s recipes, and armed with patience to the prospect of meeting with a thorny, slime-covered creatures, set to work

About any cleaning scales and obstriganie spines could not be considered. With a sharp knife I cut down into the abdomen ruffs and gutted them. The greater part of the catch cut off the head and put it on the fire to cook them broth. On the elimination of mucus take care also did not have the benefit of Sabaneev says that the ear gives it a special flavor.

When the broth was ready, started the main action. On the bottom of the pan-the pressure cooker in one layer fit ruffs. The surface layer was covered with finely chopped onions, grated carrots, Bay leaf, pepper-peas and salt (the quantity of these ingredients was determined intuitively, on-the-eye). Then on the first layer overlap the second with all of these additions, followed by the third etc. After that the billet was filled with broth so that it covers the top layer about half a finger, added a couple of tablespoons of tomato paste and the pressure cooker was put on fire and after boiling languished on low heat for two hours-two and a half. After this time the process was over, and after cooling the pressure cooker that you can open it and try the prepared dish.

About spent on all the hassle of time to spare I had to. No spikes to fear there was no need: they softened during the simmering fish at temperatures above 100 degrees. As for the comparison taste arsineh canned food okuneye, you first deserve a higher rating, so to speak, by definition. At least, so says the author…