The double-bass as if stuck in contact with snags, but I gently dragged the fish through them and safely brought 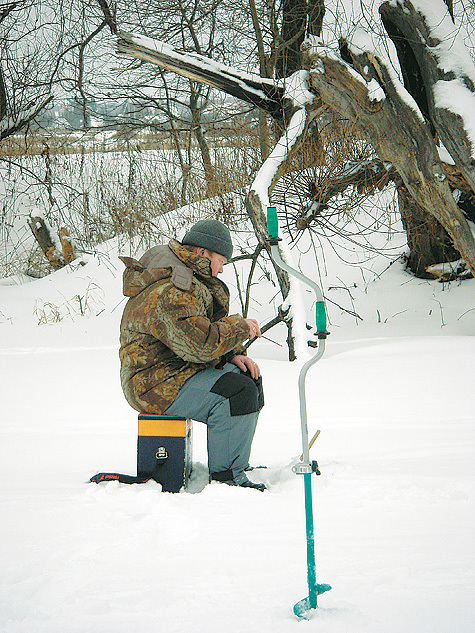 One day, shortly after freeze-up, my closest friend Volodya by Ohmatovim went to a big pond near the village of kondol’, located 70 km South of Penza. It was a still, windless day with the temperature close to zero.

The pond stretched almost 2 km Thickness of ice was sufficient, more than 5 cm, and allowed no fear to conduct searches across its expanse. But wherever we tried to find a good bite, only caught okoneski-“sailor” no longer than 7 cm.

Finally came to a forest sticking out of the ice snags and this is where things got fun: perch began to appear much larger.

Volodya and located on opposite sides of the driftwood. Lowering the jig, I position of nod realized that I had reached the bottom and started the game. But suddenly, nod slack, and I realized that the jig has not reached the bottom, and the surface of some driftwood. Dropping her down, began to play off the line from the reel, after which the pattern repeated once again: the jig again fell on a snag, and then retired finally to the bottom. I had to slightly raise her as a nod gently suddenly has sgorbissa up, indicating a correct bite, and I pulled quite a decent bass under 100 grams. At the same time my hand felt like a double-bass as if stuck in contact with snags, but I gently dragged the fish through them and safely brought.

After that, the pattern of fishing has taken sustainable. Again I lowered the jig and acting quite deliberately played it to, passing first through the first and then the second barrier, fell down, soon followed by bite. Apparently, under the lower floor of driftwood stood a gaggle of snappers, eagerly nabrasyvanija the bait – bloodworms. By this time, I have already adapted to the specifics of this awesome fishing. I had to move slowly, without fuss, allowing the jig to slide off of both floors, and after the strike, smoothly and coolly looking around driftwood, bring your booty up, avoiding any snags. However, the latter was not terrible: in the drawer lay off of his own design and workmanship, smoothly helping out in a variety of situations.

Seeing my progress, Volodya, from time to time minimally one perch after another, drilled a few holes near me, but, alas, the same rapid nibble met and returned to the old holes.

In the second half of the day the pond came a large company of fishermen and, “Srinivas” my bravura fishing, sitting around, making the ice visibly sagged and it made the water that formed beneath our feet a few puddles. But no matter how tried my envious, the same fish they had. Frustrated, they left to seek happiness elsewhere.

“Two-storey bite”, which I am so incredibly lucky to have brought almost a drawer full of perch, so I returned home overjoyed.
Volodya was also not offended. Stock fish in your ear he’s had quite enough.