In late winter, not willing to take positions March, burbot surviving in Lovat during the illegal bombing and electrotek, developing an active voracity. In search of a prey the predator examines a pit, shallow and garagiste space, absorbing everything that comes his way. The primary method of production gets us fishing with trotlines. 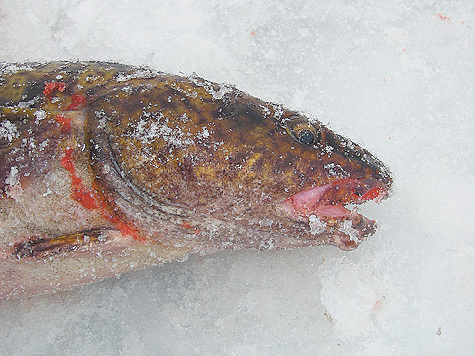 In the evening, dressed warmly, and taking with him everything necessary, we go to the Islands. Here are towering dark pyramids future bonfires of dead wood, harvested during the day. To the side are bundles of hay, old, delivered on the eve of my partner.

Andrew deftly drills a hole, and I – hooks with long fore since the fall harvested Nightcrawlers that were kept in the basement in a bucket. Down in the hole bait. Cargo, lead spoon, easy to be carried to the bottom line of 0.6 with bait. Across the hole lay a stick 30 cm in length with a wound on her fishing line. At poklevke a predator easily unwind it and then salceda, and tied her little bell reports. All one has a trap, go ahead. After five tackles, installed under the shore of the first island, quickly darkens. Partner includes a light and Shine for me until I mess around with the bait and call.

Second five tackles establish the other Islands. It’s getting colder. Drilling a half-meter ice warms, but the cold wings and makes kindle fires.

Poorly sverkaet the bell, and then another, and then ceases. We are running on this exciting call and pulls in the snow small nalichii. There is a beginning! Heart beats joyfully and recklessly. Naiwu and lowering the ground, in a hurry to another trap. The fishing line froze solid and gave a call to continue the trill. This Donk was a big perch.

The second top market brought three large burbot. Happy luck, we returned to the fire, warmed up, drank hot tea from a thermos and returned to the rigging. Fishing passion by the hour was getting stronger, fueled falling on trap fish. The hole was a little frozen and we had to remove them in ice. To speed up the process of fishing, we tied bells, and the hole closed sheaves. Fishing went deaf to the touch, and it was the right decision.

At midnight, the biting stopped. We took off the donkey, put them in a fishing box and went home to put out the fires. In the morning enjoyed a delicious fish soup with green seasoning.

The following evening, the operation was repeated. Bells rang regularly, nalichii caught small, but our joy was immeasurably greater. Midnight finally got a solid copy. The fires finally burned out. This time we left donkey for a day, preparativ sheaves over the hole with snow.

When the day we come to the traps, we found numerous Fox tracks and magpie crosses – animals and birds were picking up the remains of our dinner.

So, the whole week we were caught after fattening gluhozime spawning predators. Thaw and had to change tactics. Closer to the middle of the river formed gullies, in them we threw the donkey, tying the ends of the woods to the coastal bushes. The bells now rang leaping, making all haste to rush to the coveted traps. The night passed quietly, the warm weather allowed us to satisfy them until the morning. Fishing was no less profitable. Apparently, light bonfires in the fall and spring, attracted predators, and fresh water increased their voracity. One of the luckiest days of small perch, stranded on a hook with a worm, swallowed a big pike. Remove it from the ravine was only with the help of a long pole with a fork at the end. We have long marveled at the fact that this river is the crocodile did not bite the leash of nylon fishing line.

The February calls brought us much joy and wonderful moments of fish playing for a long time preserved in our memory.