The growth of the snow, of course, useful for future harvest, but fishermen and hunters caused a lot of problems: dog cannot go after the beast, and the resulting ice water thick snowdrifts blocked the access of oxygen and light under water, which dramatically reduced fish activity or forced underwater creatures to leave the familiar places in areas suitable for survival. However, in small and shallow ponds and lakes the fish have nowhere to go, and if it happens long to thaw, giving fresh water, these ponds begin to “burn” – here is Zamora, which survive only carp and Rotana, and the rest of the animals are killed. 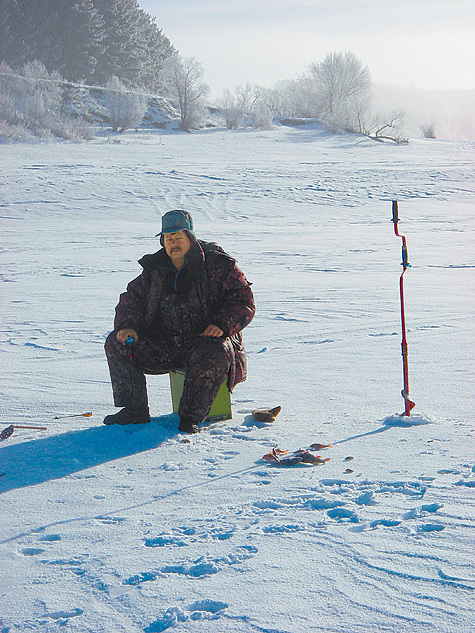 Indicator that the situation in the pond is critical, serves as a quick exit into the drilled hole a variety of water insects and even fish. Anglers can save this body of water, if collectively take up the matter, but should immediately say that the time-consuming drilling large number of holes and sticking them in bundles of straw, as advised in the literature, it is also useful to save the fish, as dead poultices. The most effective, if possible, is pumping water on the ice chute from one hole to another with a pump. But if not art, then you can proceed as follows: holes are drilled approximately 50 metres from each other and are inserted tightly rolled up pieces of roofing material, and this must be done so that the lower end of the pipe fell into the water below the edge of the ice for a few tens of centimeters. The air under the ice is pumped through a long hose, or pump boat “frog”, or a car pump. The resulting air bubble, or “lens,” the well supplies the water with oxygen within a half to two weeks, then the operation must be repeated, and the old air can be easily discharged to the outside, if it’s already frozen in the ice with a pipe of roofing material to drill a fresh hole.

And yet, snowy roads and poor biting of the fish is not able to “dissuade” the most experienced and thoughtful anglers from going fishing. They know that in the difficult period of winter is better to go fishing for large and deep reservoir with good flow rates and on the river with a noticeable current in the presence of deep pools with reliable ice. In the rivers fish usually accumulates on the inlet and outlet of the pool, and reservoirs meeting with a solid bream, perch or pike, the most likely for depth of sharp breaks in the bed of the reservoir, and primarily where the bottom of the least covered with a layer of silt – better when it’s hard, sand or clay. Smaller fish – ruff, perch, roach is going on the coastal slopes in depth, but again, where in the summer there were sandy beaches, and not overgrown with water grass.

Fishing in the “gluhozime” slow, requiring the angler perseverance and patience, because often it happens that the fish is on a promising location at this time takes either a short time during the day or every bite going through quite a long time and is a result of proper manipulation of the tackle, able to “persuade” even the most well-fed and inactive fish: the angler to move the bait on the bottom, creating a cloud of Muti, that will stop the jig with fresh bloodworms only millimeters from the bottom, allowing her to only slightly wince from the blows of the heart that is transmitted to the hand and then do a very slow posting from the top down, simulating free-fall, and therefore available food… In General, a lot of methods and selection of them is entirely dependent on observation, intuition, art anglerfish.

Tackle for fishing in late winter should also match the prevailing ice conditions. As a rule, the fish cease to respond to fast-moving and larger lures tied on a thick fishing line, which itself makes sense fish vibrations. Better to use the smallest light jig on the line-the cobweb and the float rod to use is extremely light, with a long and thin leash that allows the bait on the hook with a natural pace to fall to the bottom without arousing suspicion from wary of large fish.