Sable is a small mammal of the family Mustelidae, which belongs to the genus of Martens. In view of the animal very slender, agile, graceful and has a unique nobility. This article tells in detail about this wonderful animal, describe its way of life and nutrition, and ways of breeding these animals in captivity. 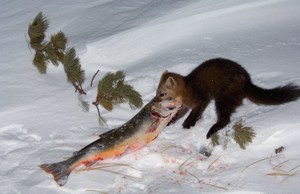 The body of the animal is small in size. In length, males reach from forty to sixty centimeters and weighs up to two kilograms. Females differ from males in smaller size and weight, as well as grace and dexterity. The animal’s elongated torso and short legs, causing the back of the animal is always in vigneta position. Feet wide, well adapted to life on earth.

Sable has a very lush and beautiful tail, which is considered the asset of this animal. The tail usually reaches a length of up to twenty centimeters, which is approximately one-third the length of the whole body.

The head of the animal has a triangular shape with a pointed muzzle, framed by large, triangular ears and a fairly wide base. The lush fur of the animal, which in the winter becomes incredibly thick and completely covers the body of the sable up to the pillows of paws and claws.

It is worth noting that the sable color varies depending on the time of year, in summer it has dark-brown with black-brown coloration of the legs and tail, and in winter, the animal becomes lighter and the color of its fur is like the color of sand. While in winter, the head of the animal appears blurred bright spot. 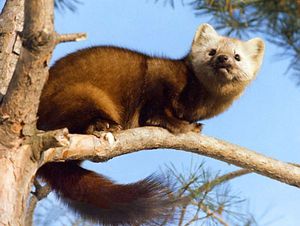 These animals live in the taiga of Eurasia and occupy the territory from the Pacific to the Urals, but most of them widespread in the far East and Siberian regions. A small part of the Sables live in Mongolia, China, Korea and the Japanese island of Hokkaido. Dark and damp coniferous mystery, which is planted with cedar, spruce, fir, considered as the home of sable, and its limits, the animal tries to leave.

The animal prefers to be in tight and cluttered areas, covered with moss, grass and stones. It happens that sable homes find located close to the villages, but despite this, the animal leads a solitary life and does not like to interact with people.

The animal is able to alternate between a nomadic and settled way of life, but the animal very attached to its territory and leave it only if his life may threaten any natural disasters, lack of food or deforestation. The animal has several dwellings. They are divided into permanent dwellings, temporary, brood and winter. The habitat of the sable builds and uses only natural structures in the form of recesses in the rocks, earth, trees and other natural cavities, which he subsequently settles. The animal does not hide their holes, they are very easy to find at many tracks, especially in winter when there is snow.

In their burrows animal equips the nest chamber, which is a floor lined with hay or grass. Near the burrow, the animal settles his bathroom, he sneaks the trail, and in winter under the snow trenches. In one place the Sobol lives two to three years. As the animal lives on earth, and especially in shaded thickets, the snow and cold of winter it is absolutely not terrible. The animal is perfectly oriented under the snow, thus making there moves. However, he moves well and at the surface of the snow, freeing a path with wide feet. Such methods help sable to escape from predators, confusing signs, to detain the predator.

Trees animal moves bad, so this way of movement is uses very rarely, and this is its main difference from its nearest relative – the pine marten. But to jump from the crown of small trees at a little distance from him it turns out well.

In normal movement the length of the jump sable can reach from fifty to eighty inches, but if he becomes a victim of persecution by the predator, the length of the jump reaches up to four meters. The animal swims very poorly, this is because the thick coat gets wet and prevents the sable to move through the water.

The most developed of all the senses in the animal a sense of smellthat helps it locate food even under large drifts of snow. 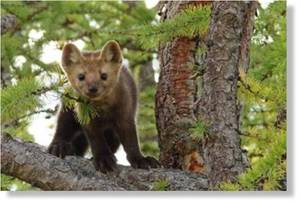 Sable a carnivorous creature, but he is omnivorous. As a rule, most often he uses mice and other rodents, moles, chipmunks, etc. Rare sable can catch pikas and squirrels. Males sable even able to hunt the hare.

It happens that the prey can become the sparrows, grouse and partridges, but to hunt on them it is quite rare. WithEbola that live in areas of the Far East, feeding on fish. They are getting close to the banks of the rivers during spawning, and pick up dead fish.

In the winter, when food becomes harder, sable is used in the food of carrion animals and birds. If the family of Sables cannot find the carcass of a large animal, they arrange temporary housing shelter not far from their findings.

This animal likes to eat honey. When he finds bee hollow, then it starts to come back in there until, until you empty it completely, including larvae, honey comb and bees. The animal prefers to feed on berries and other fruits plants. He loves cloudberries, cranberries and blueberries and pine nuts, it happens that he steals these treats from the hollows of other animals.

To seek and obtain food, sable may at any time, day or night. If the animal is in a state of starvation, it is able to run in his quest of more than twenty miles per day. But if the supply of animal food sufficient, he runs the day to three kilometers. Animal is able to remember places in which he finds food and returns there to find more food.

With the help of the wonderful smell, and very fast response the animal can immediately smell prey under the snow. Then he quickly sinks into the snow and catches the prey. 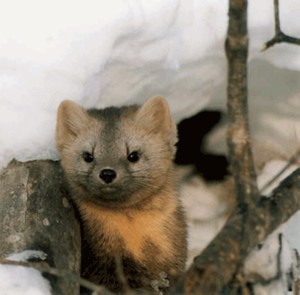 Initially, scientists have long studied the reproduction of these animals, after which the researchers found that pregnancy in females lasts two months, sable gon falls on February-March. But after people started to breed these animals in captivity, it became clear that the Sables have the ability to delay embryonic development. In the end, it became known finally that the rut sable summer time, and incubation of young lasts about nine months.

Sables are born mainly in April, and the offspring is two to five individuals. The female leads of the Sables in a prepared shelter, which she carefully shoots wool, hay and moss.

Newborn sable weighs only thirty pounds, and is completely helpless. Only on reaching the age of one month young Sables open their eyes, and they begin to distinguish different sounds. Over time, the female will begin to teach their children to meat food, bringing prey in the refuge. Toddlers begin to acquire the skills of finding food, hunting brought by the mother of the prey. Female sable defends her brood from predators and can pounce on anyone who comes to her place of refuge, and the sense of danger she carefully hides her children in a new place. 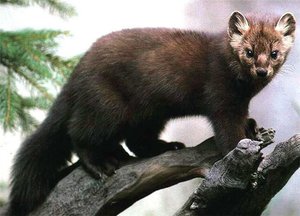 To breed Sables in the home of a very troublesome and time-consuming, and most often it is done to obtain the fur. As these animals are very active and they need lots of space for revelry and life. Since sable is a very smart animal, he knows how to open simple locks, to climb over the barriers and jump in the gap of the cage to prevent the need to make quite a large and sturdy cage with metal bars on the Windows.

Proper nutrition will allow you to save the wool, so to feed the Sables need the following products:

In General, the diet of the animals needs to match what they eat in the floor conditions, as poor food can leave its mark on his fur, in the end, sable fur would look bad.