Fishing, I think, something akin to eternal drawn some people to the knowledge of other worlds, and the mysterious place of the upcoming fishing, the more magnetism it has. What angler, still not releasing the line tackle, did not feel the gambling thrill, being on the shore of a dark, bottomless pit or in the shade of wooded slopes-NAPs, hanging above the river bend? And sticking out of the water the slimy driftwood more add spice to a favourite place, and it is unlikely that any angler prudence will overcome the desire to send a beloved and very cheap trolling to the nearest korazin or accumulation almost inevitable that this flight silver kudesnitsa will be the last and it is bright dissonance hangs in the twilight plexus dead branches. 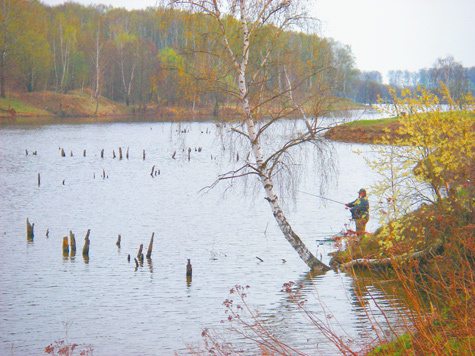 Experienced anglers know that the risk of losing bait is justified, because it is difficult to for various gear areas are most likely the grasp of these monsters, that their mighty potica makes the heart beat faster.

Attraction of predators, especially large, snags or debris from the sunken during the alloys of logs is simple: they gain here is not so much easy ambushes for hunting, how much prolong his life, not becoming prematurely victim to the grasping of the Seine. And not everyone, even experienced in the business spinning or a fan of trolling with a boat in a plumb dare to think in the jumble carca — bites, in spite of frequent and painful loss of lures will be a lot, but the outcome of the match with a tough opponent is easy to predict, if not to follow some simple techniques to achieve a certain reduction in losses.

What do you mean, let me explain by example. In one of the ponds was full of many very large pike and perch up to 3 kg weight, but they live in snags, and in clean places has been the only “active” predators. All attempts to catch in Karcag distressed — cost the lure to reach the bottom as she “sat” there’s dead, and posting in half-waters, too, is not exceeded and the meter and led to a known result: apparently when they put the dam did not bother to remove subject to flooding trees and shrubs and rotten trunks of fallen haphazardly. However, confidence in the success of fishing on this pond I added polarized glasses. The device helped in no wind nice to see a fairly clean and shallow water pile Carta and for fishing to find some semblance of short corridors in them, as well as to deliver the bait from the meeting sticking on its way separate branches and snags, which was achieved by rod maneuvers and the change in the speed of rotation of the coil.

Selection of tackle and fishing tactics for bass in early spring

In one of fine days, I went on, “the beast”, armed with a spinning middle class, to the coil was wound around a conventional fishing line with a diameter of 0.22 mm. as bait used is very light vibrating minnow “Spoon,” as far casts was not going to do that all what is happening was in sight. In addition, this lightweight and quite wide spoon slowly sank into the water and allow without delay to stop her fall and not to go on the driftwood.

The first several transactions go smoothly, without snags and no bites: shining, Nickel-plated sides, “Spoon” that was fast, rising over the next on her way to the snag, then, trembling like a dying fish, slowly falling down the stretch with no hooks, it all looked very tempting. And once the “corridor” one of choragic suddenly prispela from the bottom toward the falling of the spoon and as if poked in it on one side. The lure disappeared and the line suddenly hung heavy.

The confrontation with the predator, and it was at least six pounds, did not last long: enough powerful spinning, rubber-like thread, and a weak and small tee on the spinner proved to be a solid argument in favor of the angler. “Crocodile” was done to tackle what you want, elastic, almost in the ring turning his powerful body in the water and flashing yellow like a Python’s belly. As I rested, as best he could, because there were snags, the fish straightened two of the three horns tee and then let me go in peace…

This case was the only episode of fishing practices, and the campaign for the “crocodiles” was accompanied by repeated hikes in outlets and considerable expenditure. The result was a tolerable enough tackle: hard spinning and power reel. Yes, and the line had to be replaced by a thicker, and therefore tougher and more durable, with a diameter of 0,3–0,32 mm. has Been given the necessary attention and leashes, and zippers, and hooks, standing on the baits. Such a set is allowed to aggressively counteract the large predator, depriving it of maneuver and forcing you to quickly come to the surface. Of course, not every grasp fish in heavy snags were over productive, and this is understandable, but the memorable victory happened quite often.

In the subsequent tackle, of course, an even more improved: adopt came visceratuant carbon fiber “stick” in the production lines has also occurred a revolutionary change, and now all the anglers, of course, give the palm is extremely durable and virtually inextensible braided cords. They are in the case of a dead hook often allow either straighten the hooks or break the piece of driftwood, and in the case of the bite of a large predator provide an opportunity to maintain a rigid relationship and operative to deflect it away from the snag places or fast pick up, and relying on the strength of the rod and the force capacities of the coil. By the way, under braided line, which has a significant abrasive properties, it is necessary to choose and special rod, equipped with rings SIC, and the corresponding coil with a wear-resistant roller of the line bale.

A very important advantage of front braided fishing line nylon monofilament is its high sensitivity on the bite, especially this quality is necessary when jig fishing, when the bait is ledges, and grip occur most frequently at the stage of free fall in the water column. In addition, the network constantly transmits the signals through the rod in the hand of all touches the bait snags and rough bottom which provides a very accurate picture of the topography of the site of fishing and density “fit” carca in one direction or the other transactions. The lack of “braids” — a strong freezing in the cold. But it very effectively eliminates any special sprays for fly cords, or by treatment with silicone ointment, which periodically should be applied to the rings of the rod, and the roller line bale, well prevents namerzanie ice and liquid mineral oil, which to RUB the network, extending it through the pre-oil soaked swab.