On the pond the fisherman first chooses a place to sit and place gear and the necessary accessories. But the fish about this place can be a dissenting “opinion”. The fact that any body of water suitable for fishing parts of the coast not so much, so all of these “noses” are quite often visited by anglers, and the fish here regularly suffers considerable damage, which makes her wary and often an avoidance response of this dangerous area of the reservoir. If the angler will have to settle for the inconvenient place, the fishing can be not only unsuccessful, but also unpleasant: cling to the grass and bushes of gear, fall in the water badly installed rods and things the angler, the fish are hard to take with water… 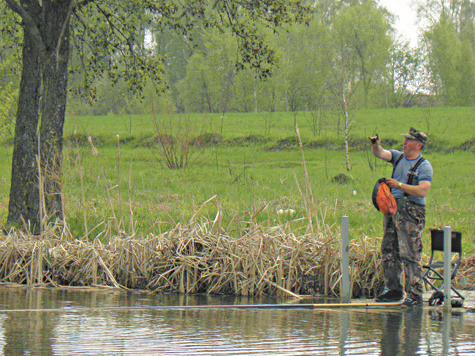 There is only one: choose a convenient “patch” and try to break the wariness of the fish and its reluctance to bite on the delicious head. To this end, the fishermen have long used the baits and bait. To do this, they still use a variety of cereals, cakes, steamed grain cereals, peas and other foods. Not always such charity is to the benefit of both the fish and the pond and the fisherman: in order to maintain catches at the same level, increase the number of anglers throw into the water the bait and bait. Fish oil reduced the herd is no longer able to assimilate plenty of food, in warm summer water turns sour in a few hours, it absorbs oxygen, cloud the water, highlighting her upon acidification and further decay of toxic substances, causing water significant environmental damage. Fish, in full agreement with the ancient saying “beware of Greeks bearing gifts” — for a long time, if ever leaves the previously catchability place.

In recent decades, our anglers sportsmen and their example, and many fans began to achieve good results in fishing use bait sports sample, which because of its composite features is not saturating fish and not polluting the pond, to attract the fishing object to the chosen place with a rather large distances. Advantage sports baits is that they are made from finely ground, well the dithering water components, most of which actively affects the taste buds of the fish, and, like a magnet, attracting her to the place of fishing. In addition, some components of the bait, participating in digestion, act on fish as a laxative that also strengthens the intensity of power. To significantly enhance the attracting effect of bait in it in small quantities, introduced a variety of both liquid and dry flavoring agents.

We next consider the structural part, give a characterization of most components, will describe the technology of preparation of bait in sport at home and then directly to the reservoir.

For ease of explanation, there is a conditional classification of the components of the blocks.

Such blocks can distinguish at least six:

The division of probation for the reason that many components included, for example, in the first block, in varying degrees, serve both to attract fish and are eaten by fish, and have a weak flavoring effect. Ratio many components from the first and third units is largely determined by the viscosity (the ability to shape the ball) bait when mixing it with water. Components of the fifth block, which usually of animal origin, have a strong disintegrating action on the bait, however, and some components of the first block. This ambiguity of the action of a number of components is determined by the physicochemical processes of their interaction with water and other components of prepared bait. For example, some of the components contains a sufficient amount of fats, both vegetable and animal origin, which causes “dispersion” of particles of bait in the water and leads to the destruction of the world.

Next, consider in detail each block of components.

Breadcrumbs are a main “consumer” of water when mixing the bait with water directly on the pond before fishing. Thus, when the erosion of the bait that is the breadcrumbs will be a carrier of the same fish attracting substances that were present in the dry mix and was added dissolved in the mixing water. Breadcrumbs make up the largest part of the bait (40-60% by volume) and constitute the “skeleton” around which creates a bait as a whole, depending on its functional purpose. Breadcrumbs can be made at home from dried remnants of bread, passing them through a meat grinder. They are on sale.

Oatmeal besides his unconditional attracting effect on the fish, is a good binder for all the other components. It is clear that the greater depth and higher flow velocity in the shery, the greater the oatmeal should be in the bait (maximum of 30-40% of the volume of crackers), and Vice versa. Oil-cake, hemp seeds, sunflower, canola and flax are sources of vegetable fat containing amino acids that act as attracting substances. The presence of bait is “oily” particles poorly wetted by water and relatively light, contributes to long-range transport potential of their current and increases the distance from which is drawn a fish. Oilseeds (a maximum content in dry mixtures up to 10% of its volume) for the destruction of their proteins, release of amino acids and formation of other volatile components of the pre-fry (avoiding burning), and then crush thoroughly. The degree of grinding of all components of a mixture depends on its “range”. Cakes, unlike the other components are prepared separately: before each fishing trip they steamed by pouring boiling water in a pot with a tight fitting lid, and injected into the mixture (up to 50% of the total volume) already on the pond. Bran is the lightest component, as they practically do not absorb water when kneading the mixture. When erosion over bowl of bran bait is carried away by the water long distances, attracting fish from afar. In reservoirs without currents in the destruction of the ball in the water bran slower than other particles of the mixture settle to the bottom for a long time attracting fish. The content of the bait is not more than 10% of the volume of crackers.

It should be borne in mind that the bait sports type and design so as to contain a fairly wide range of components differing in the rate and degree of swelling in water, and hence the speed of erosion and sedimentation, as well as the range of the entrainment flow.

Schematic distribution of the concentration of bait and fish attracted by it are shown in Fig.

A flock of fish in their diet is moving in the direction of the zone with maximum concentration of feed, and observed a certain subordination in the behavior of fishes: the largest species tend to occupy areas with the highest concentration of the attracting substances.

The last group of components included in the first block is the so-called ballast. Usually it is clay, sand or gravel. Ballast required for weight of bait, if the depth of a fishing spot is very big or very strong eddy current. River sand or gravel also contribute to loosening of bait. Clay the for gives a generous plume of turbidity, encouraging the fish to move in the direction of its source. Ballast in the bait can be up to 30% of its volume.

Often to increase the disintegrating effect it is necessary to introduce into the mixture the chemical rippers, the components of the second set of components. Usually it is a mixture of baking soda and a dry brew. The interaction between them when dissolved in water leads to a significant release of carbon dioxide that breaks and destroys the ball of bait. Simultaneously, the bubbles rise through the flotation effect is captured with a tiny particles of bait, raising as “range” bait and float at the surface of the vertical column turbidity. Even in the absence of this block of components in the bait its viscosity when mixing with water should be such that it still remained to some extent porous, gas-filled. In this case, the gas bubbles breaking the surface will also destroy the ball of bait, and “geyser” from emerging at the surface of the water bubbles accurately to indicate to the fisherman the place where lay the abandoned portion of the bait. The amount of soda is typically less than 1% of the volume of bait, dry kvass, you can add up to 10-20% of total dry mix.

The following major unit components serve attracts, which include dried blood, dried milk, egg powder, and roasted and chopped peanuts. These elements comprise almost a complete set of biologically important amino acids that mimic the taste of natural fish food. Soaking with water when mixing particles of the other components of bait, easily carried by water or spread by diffusion, amino acids cause reaction in fish movement in the direction of increasing concentration of taste substances and thus attract it to the place of feeding. At the same time, these substances contribute to an increase in feeding activity of fish, “incite” her appetite. The total volume content of these components in the dry mixture — not less than 10%.

The next important element will be bait flavours. For this purpose, use as heavy (corn, sunflower, burdock, hemp, canola) and essential (anise, dill) oil, and various fruit essences (pear, banana, strawberry, raspberry), or mixtures thereof. A good eye-catching effect is observed when applying a mixture of vanilla with cocoa. Partly, some flavors mimic the higher concentrations of dissolved oxygen in the water, “refreshing” it, thereby increasing fishing activity in the hot season, when the water is overheated and the fish in this period is very lethargic. The only advice I would give on flavorings — use any one, because very often the mixing of the bait in several different flavors (for example, essential oils with the essence) gives a negative effect. Heavy vegetable oil added to the bait in the amount of 2-3 tablespoons essential oil — 1-2 drops of essence — 5-10 drops, crystal vanilla — teaspoon cocoa 2 tablespoons to 1 kg of dry mix.

The most important part of bait is the animal feed base. Usually it’s the feed bloodworms or small maggots, often with chopped worm, sometimes finely granulated clam meat — perlovitsy or the Zebra mussel. The use of animal additives is one important subtlety. Feed bloodworms in storage without water usually loses some moisture and, accordingly, the specific gravity, so that it doesn’t pop up in the water, and was at the bottom and effectively attracted the fish, it before submitting it to the bait it is abundantly wet and allow time to soak up water.

Often, especially in the context of the competition, you need to quickly collect fish in the fishing area. It is clear that bait in this case must be very dry (allowing only with great difficulty to form a ball), so very quickly the dithering of water and far away over. Order this ball you could throw to the point of feeding, and that he reached the bottom of the reservoir at any depth and the force of the current used tools for the artificial creation of ball. Well in this sense have proven to alginates (salts alienboy acid) is chemically and biologically inert, forming a gel substance, very soluble in water. Prepared to throw balls of bait dip for a very short time in a 5-10% solution of alginate, remove them and allow to dry in the sun and wind. After a short time on the surface of the balloon is formed of a viscous solid film of dried alginate gel, allowing you to throw the bait into the water without destroying the ball. On the bottom of the pond, this film is quite quickly eroded by water and balls of bait like “explode”, as they are very porous, gas-saturated. In this case, it is necessary to increase the number of “ballast”, otherwise the balls of bait simply will not sink.

4 Comments on “The structure and components of bait”