Depending on what fish and where you expect to catch, you need to make a choice between the feeder and picker. For example, if the goal is big fish (carp, bream, large tench or crucian carp), and reservoir with stagnant water, it is almost definitely stop at the feeder. The larger expected production, the stronger gets the tackle. 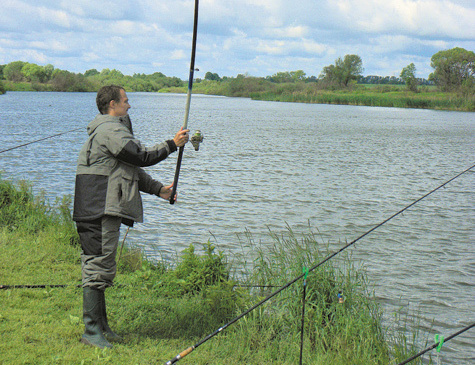 Powerful tackle allows not only to successfully fight big fish, but to throw a snap with a heavy feeder to the maximum distance. The difficulty is that you have to guess where to throw. To predict where it will strike, it is impossible, we can only speculate that most likely this will happen or on any curb, or in the shallows. On a flat table or in the hole the likelihood of bites is very low. To increase the likelihood typically use several rods, but to get involved in a number of not worth it. Reasonable from the point of view of comfort catching the limit is three or four rods. Very often count on the big fish have night. There are ponds in which big fish day does not bite under any circumstances, and at night, when the little thing is asleep, you can achieve impressive results. Big game fishing involves a very clear plan of action and a lot of patience. The snap-in must already be at the point of alleged bites long before the release of the fish. This is necessary, so as not to alert the fish. During this time, which can amount to many hours, the bait is distributed in the water and begins to exert its effect. Preliminary prevajanje of fishery yields results, but only when you exactly know the way out of fish to feed.

When fishing, limited daylight hours, the use of classical feeder lines into the still water gives the result only where large fish are many and well-known places of its Parking. For example, in karpovykh, but here’s another problem. As a rule, karpovykh very few really big fish, and her biting is stopping smaller, and often this carp. I sometimes visit a pond where there are a few dozen big carp and cupids, but as soon as the snap hits the water, literally immediately the bait starts to pull carp 30-100 g. it is Clear that the question in the bait. I want to appeal to Balam, but no time. The fact that you need to handle the first few days the bait fish and only after that to try to catch.

Fishing in may at carp

To use the picker in stagnant water, with no snap-in trough has a meaning in the study of the reservoir. Using it is very convenient without a boat for a few hours to explore the entire coastal terrain, then next time take a Piker with a light feeder and try to catch. The catch may be the whole fish, starting with the ending roach and a gudgeon. Easy picker in still water I use when for one reason or another inconvenient to use long float rod, and also in all cases when the distance catching the big one. A very common case, when edge-located thirty or forty yards away from the shore. You can use “far casting”, but comfortable fishing here is usually in the way the wind and sea. When the edge is so far from shore and depth it does not exceed one and a half to two meters, and in calm weather there is quite a strong surface current, and bottom tooling is not only more comfortable but sensitive. Besides, well, forget that with increasing distance from the shore bite fish become more confident, you might say, “arrogant”. To catch the normal roach and skimmers using bottom gear, constantly pertubative snap, some will seem tedious, but it is much more interesting and more effective than spending hours looking at a stationary float when the fish is near the shore there.

Not least, while choosing between float and bottom snap-in, can play eyesight of the fisherman. Last time I mentioned that I had to make a light feeder tackle (picerne the rod with the feeder) for the spouse, since the observation of the float (with a thick bright antenna) in half an hour becomes her bleak even “furious” bite. Just tired eyes. So, in order not to follow a soft rod tip, I added the tackle of the electronic signaling device of bites. Now everything is happy, and catching got better. Here I would like to draw attention to the following. If you catch in the neighborhood with other anglers, then do not configure audible alarms so that they could be heard even from home. People come to relax and for many, the silence serves as a criterion for the selection of a reservoir. In most cases, of course, if you are going to sleep, simply remove the sound and leave only the light signal.

Bottom snap is most effective when fishing on the course. And than the for stronger, the donkey more benefits. When designing the gear it is important to choose the weight of equipment, given the casting distance, depth, current and windage of the scaffold.

The General approach is the same as in the absence of appreciable currents. That is, if you want to catch carp, you need a powerful feeder heavy feeder on a solid line. Have knowledge of relief with the exit of carp pits, patience and luck. When running fishing with lighter tackle, the rate of finding fish can be very high. I remember how in childhood we used to catch primitive zakidushek during the spring the course of roach on vozhskaya ducts. Snap-in, consisting of olives and one hook with a worm, throw it out, wait about a minute and pertubatively. After the first bite and throw the point to bite until the bite followed one after another, then change the place of fishing. Such fishing is good when the concentration of active fish is very large, and while hunting for single copies of large fish, for example, in the shallows. In all other cases, I believe it is preferable to use a picker with a light feeder. Bait in the first few seconds activates the fish nearby, and the distribution of bait in the water, collect the fish. It therefore does not make sense to strive to use large feeders, especially since it will entail peregrujennie rods or even the need to replace it with a more powerful model. In my opinion, it is better to take the rod with the test up to 60 g and catch at a rapid pace, often making perezapisi refilling the feeders and changing bait more fresh. That is, I am a supporter of active fishing. At a high rate of catching can almost constantly to maintain a trail of bait in the location, and, therefore, not only to maintain the activity of the fish, but also attract new fish from farther distances. If you don’t miss and don’t do breaks, in a relatively short time could be feeding the fish and fishing will become very active. Active bite even small fish are good not only because the fishing is active and interesting, but the fact that all the time increases the likelihood that the fuss the little things on the bait will interest a large fish. This is similar to float fishing.

If you compare the bottom with a float snap-in, then the undoubted benefits of the bottom need to get range and guaranteed to hold the bait in point fishing, and jet bait. The disadvantages are the lower sensitivity of the tackle which more than kompensiruet increasing with the distance of fishing activity to fish and the monotony of feeding the fish bait. The latter in most cases are not so important. However, when careful Kleve just lying on the bottom of the lure can become unclaimed. To give the game the bait, the simplest is to increase the length of the leash, but then you need to adjust the consistency of bait. The farther the hook with bait is the bait, the less likely the fish to bite. Therefore, if you increase the length of the leash, then you need to make a trail of bait below the trough was more stretched. You can give the leash an extra buoyancy and to raise the bait, but I believe that it is better to work in the other direction. To change a place to adjust the bait, experiment with bait. And maybe most importantly, you need to learn to make accurate casts.