How fish tolerate fluctuations in temperature, and how does this affect their activity?

Will try to figure this out. 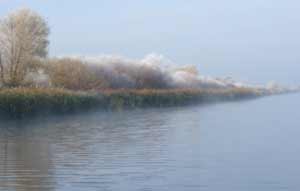 First, you need to answer the question, what is the difference in temperature generally tolerate fish. Our usual freshwater fish are able to withstand fluctuations in temperature to 15 – 20 degrees. But under the condition that the temperature changes gradually. Usually this drop of temperature occurs within a few weeks or months.

Drop 4-5 degrees (not associated with the change of day and night) affects the activity of fish. Best fish feels with a minimum daily change of temperature. It is believed that this range should not exceed 1 – 2 degrees. So, if yesterday the daytime temperature of the water was 10 degrees, and today at the same time is from 8 to 12 degrees, then that’s fine and we can predict the feeding activity of fish.

Fish are very sensitive to changes in temperature, reacting even to fluctuations in tenths of a degree. And when reaching extreme values , the fish falls into hibernation. However, she stops to walk and eat.

There are ranges of temperaturesat which a particular kind of fish feels comfortable. In this range they are actively feeding and gaining weight (table. 1)

The temperature of the water in which the fish is active (in deg.C)

Fall as cooling water fish activity in General decreases. The more sharply is the cooling, the more noticeable the loss of activity of fish.

With the onset of freeze-up water temperature, reaching its minimum, stabiliziruemost. Under the ice the water temperature is 1 degree on the surface or shallow water up to 4 degrees in the deepest places. Fish in this period does not feel changes in temperature and begins to show activity.

Strengthening bite with the onset of pervolakia, some need to explain the preparation of fish to heavy winter conditions. But it’s not convincing! And then the ice, that prevented the fish to prepare for winter before freeze-up? The only thing that fundamentally changes parvaldu is that stabiliziruemost the temperature of the water. No its drops. Oxygen regime more favorable in the first days does not change. All this creates favorable conditions for certain species of fish (perch, pike, roach, etc.). Some types of fishsuch as catfish, carp, crucian carp, tench etc. with the onset of freeze-up hibernate and are not caught, although there are exceptions, but that’s a separate issue.

As the temperature of open water depends on temperature air, we could extract the range of temperatures of the air in which the activity of fish maximum. Spring is 15 — 21°C, in summer 25 – 30°C, in autumn from 10 to 15°C.

It is necessary to take into account the peculiarities of the regions. For the Northern and southern areas of the range comfortable for the fish temperatures to be different. The figures given in the article are not absolute. The challenge was to draw the attention of fishermen on the impact of changes in temperature on fish behavior. Every angler needs to be observant and to take into account as many parameters as possible, including the temperature regime.