Roach is famous for its grace and beauty. And yet this fish is remarkable for the fact that she, like perch, is omnipresent. It can be found in swift-flowing rivers, canals, lakes, reservoirs and other water bodies. This time we will talk about finding and catching small fry that live in the reservoirs. 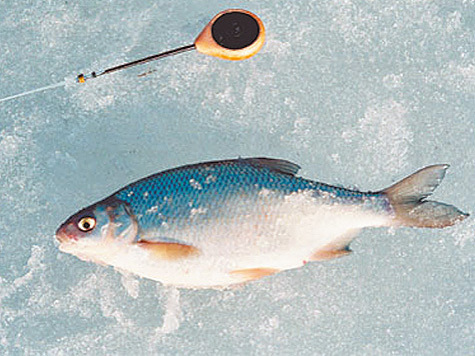 Any reservoir the artificial reservoir has its own characteristics. Habitat conditions in the fish largely depend on the regulation of the water level difference which in certain periods, especially before the spring flood, can reach 2–3M or more. Fishing for roach in areas where there is no flow in the winter is rarely effective, because this silver beauty tries to stay closer to the fresh stream, carrying underwater creatures life-giving oxygen. And, of course, you need to consider the strength of the current that depends solely on, opened the floodgates or not.

In reservoirs in winter the fish are often found on the sandy slopes of deep pits, along the coastal edges of flooded rivers and streams, mostly in areas with moderate current. And where the water is enriched with oxygen, roach often leaves and in shallow water.

If the first ice roach migrates across the pond, the middle of winter, she slips in flocks, concentrating usually at the depth of from three to five meters. At this time, she tries to stay in areas with moderate current, usually in the traditional places of their wintering grounds, which the fishermen–plotnichnye need to know. At low flow the fish spends less energy, and therefore, it requires less feed. Roaches that live in the reservoirs in the winter is quite often seen at the mouths of tributaries and streams.

Very important factors in determining its whereabouts, be oxygen regime of the reservoir, the availability of forage and shelter from predatory fish. The largest roach is almost always kept at depth. This is especially true of small reservoirs frequented by fishermen.

In the winter time at some small reservoirs of the Moscow region, for example Achinskom, I found the Parking lot of the roach at a depth of about three meters along the coastal edges of the flooded rivers. And certainly in areas with a mild current. Took average roach up to a length of twenty centimeters. At the same time noticed the characteristic that the thicker the ice became, the more likely it was to find the Parking lot of the roach at the top of the reservoir, along the edge of the flooded riverbed. In large reservoirs with favorable oxygen regime the situation is somewhat different. Here roach even at the time of gluhozime leads a relatively active lifestyle. You can detect it adjacent to the Parking lots of bream, but smaller depth. She often takes along with him.

Once I caught the bream at a depth of just over five metres (Ivankovskoe reservoir). Was unusually quiet for the middle of winter weather. By lunchtime the snow started. I bait the hook with the jig – a fairly large pellets – brush ruby bloodworm and lowered under the ice. Once the jig reached the bottom, some time is waited, then gently began to poshevelit shaking from side to side. A fractional nod shuddered and straightened. I chipped and vivarelli another fish. However, the bream were taken with long pauses, during which the nod was recorded someone’s careful about touching the nozzle. Cuttings, of course, was empty? What if it’s a roach? And really: worth it to replace the tackle, then pulled out of the water a decent roach. On the float rod with a short leash that day and took turns the bream, the roach. 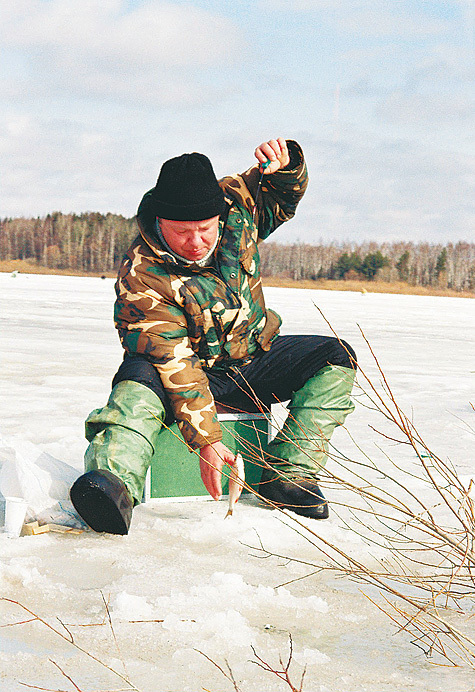 For roach entrenched glory cunning fish. It is believed that biting her extremely cranky. However, all this applies more to fly fishing small roaches there or fishing in waters frequented by anglers. Sensitive, subtle, well-tuned, tackle solves this problem. If you put the line–cobweb (diameter of 0.06–0.08 mm), a small jig with a sharp hook zatsepistye correctly matched to jig a nod, skillfully wear head – empty poklevok is quite a bit.

As for medium and large roach (up to 35-40 cm in length), then the situation is quite different: the sharp bite that is passed into the hand through the spinning, and… often a broken hook or an open line. Especially when the hook of the jig is made of a thin wire. And this is a necessary requirement when fishing on such delicate larvae like bloodworms. Remember: when searching for the spring Rybinsk roach, we were required to have a jig with durable wrought-iron hooks.

In some reservoirs, particularly within the water supply system of large cities where banks are located pumping stations, regularly engaged in the diversion of water, roach all winter lead relatively active lives. And catch her no less interesting than bream or perch, and even more ruff. But as in all fishing, there are features that the angler should know. Consider the main ones, based on our own and observed experience.

Under the ice in winter, compared to summer, the roach is more sensitive to fluctuations in atmospheric pressure. Better is fishing, when it is in a few days remains constant or gradually decreases or increases. But as soon as the pressure starts to jump, the roach stops to take and sometimes permanently.

Whether it can be justified by the fact that under the ice roach preferred to stick to the different edges with changes in depths of 3 to 6m? While it can move quickly depending on the well-being on a deeper or a more shallow place. However, in winter on the edge and easier to get the food, like primitive aquatic organisms, in turn, are also forced to adapt and to look for a more comfortable environment.

In practice, it is noticed that especially good biting roach during prolonged thaws, when the weather is cloudy with sleet or rain, and during snow without wind or with the wind of the Western direction. If increased frost and at sharp differences of atmospheric pressure bite is quite rare. Most likely, at this time, the roach stops to feed and is in a daze.

WITHOUT BAIT CAN NOT DO

Roach has a well-developed sense of smell. With this in mind, anglers use smelly bait. If bass throughout winter you can fish, not feeding the wells, the roach, this room is generally not the case. Exception – fishing at first and last ice, when roach rushes from reservoirs into rivers. As bait in the winter it is best to use proprietary compounds or wheat (bread) crumbs mixed with ground oil cake – sunflower or hemp. Cake if necessary, you can replace the roasted and ground seeds of a sunflower. Where little or no ruff, you can successfully lure the roach feed small bloodworms. Part of it (again for flavor) tamped down. Lower the crank into the hole from time to time in small portions with the help of a miniature trough. Fish, usually in 15-20 minutes. To throw pinches of bloodworms in the hole is possible only in the absence of flow. When you have it, a bird feeder with small holes and a dull constipation filled with feed bloodworms, is lowered into a specially drilled hole (1-1. 5 m upstream). In this case the bloodworms will go through the holes in the feeder and attract the roach. Well, if you use the bait of a vegetable origin, feed is empty at the bottom. Do not forget to dry the bait moistened with water before dropping the bird feeder. In this case particles of food slower will bear. And if you add in the bait fine-grained aquarium gravel to weight, can form balls the size of a pigeon’s egg and fish supplementation in the process of catching without the aid of a trough, or opening it about a meter from the bottom, even on a fairly strong current.

Usually lure 3-4 holes given the difference in depths and from time to time come back to them, checking if they came roach. Sometimes fueled in the morning, the hole may become viable only in the second half of the day.

The small fry is fed in small portions but often, because it has no stomach. Therefore, the main task in the process of feeding does not saturate the fish, and the excitement she appetite.