My story took place in my head for life. For all his years of fishing experience that fish on their lines I did not catch. Not even imagined. However, I know that the fishermen caught her on trotlines, seines, but spinning… 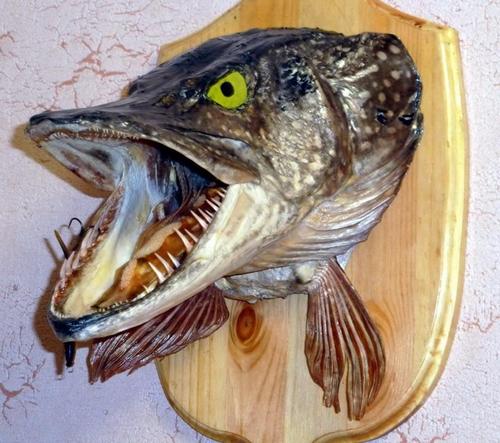 In the quiet and warm summer day I wanted to just relax. I arrived on the river Great and stopped on the shore below D. Dar. This place had been before. All sorts of bans on fishing spinning was removed. According to my observations, by the middle of June a big pike, otmetiv caviar, have had to “slide” downstream.

Prepared the boat, secured her small motor, put the spinning rod, landing net, paddles and spoons. Slowly swam a Great anchor and under the right Bank. And then began the usual work of spinning.

In the afternoon the sky was covered with clouds-sheep. But it was very warm. I slowly changed the point of casting. Rose to its slow-moving the motor up and floated downstream. But the bite was not. It is evident, indeed, otmetiv caviar, pike has gone from this place. So it appears to posledeistvie zhor. Well, it’s not fatal. Float-ka under the left coast, and if there is not abribus, go down to the dam. Thinking thought by thought, I put on the line the heavy turntable with a petal of bright copper tint and with a strong tee and anchored under the left Bank. Here was smaller.

The spoon was making blind bubbles after casting. Only after the next throw for a moment, stopped abruptly. Then fishing line left along the arc in one direction, then in another. The coil does not rotate! It dawned on me: “There is a crocodile!! This is not a hook”. So, not all predators are “gone” from here. This oiled remain.

These thoughts are a hurricane, and instantly replaced by others: “a fish out of this river beast?” Spinning, well fending off the jerks of the fish, bent arc, and felt the instance at the end of the fishing line decent. But getting him to the boat but didn’t succeed. Frankly, I began to fear that the fish will go off the tee. That would be very disappointing. However, gradually, inch by inch, I managed to bring the fish to the boat. And only when it fairly exhausted and polspline, I saw that it was not a pike, and carp! My eyes for a few seconds they determined that it is in my gear. When all were convinced that spinning natural huge river carp, hands trembling shiver — whether from a fair portion of adrenaline, whether from surprise. Moreover, powerful tee turntables have Sabail of this “wild boar” is not in the mouth, and beside him, for his face. So, he still threw a spoon, but why else would your face bait set up? I was more worried and nervous for the obvious reason…

Perch fishing on a spinner in the details

Inexplicable effort, I seized the landing net carp handle that cracked while lifting the weight of the fish. Therefore, in the future, I had to climb over the side of the boat. I groaned and panted and caught her breath, begging God that this beast dressed in mesh landing net is not ripped “muscles” boar’s torso.

It is clear, start the engine, I did not. Grabbed the anchor from the river and rowing sprinted to the shore, fortunately the ground was very close. I grabbed the landing net together with carp and moving away from the water’s edge, plopped down a sack on the grass. Although in life I had to be in turmoil, my hands haven’t stopped shaking a little. Slowly I began to recover. But in my head was a pun that is not to convey: “Where do carp come from? I actually took his “samudera” sabugal! Rushed if he’s trolling? It seems that Yes, because the tee was stuck in the face near his mouth.” These and other similar questions I gave answers and he himself doubted their accuracy. But one thing was clear that I was visited by a great success!

Staring at the trophy, I carefully inspected from head to tail: thick powerful body, scales in old Royal penny… My prisoner was still in the landing net. I was afraid to take him out, although he was on the shore far from the water.

When finally passed, the trembling hands, and my soul returned into the body, I gathered all the fishing gear and went home to bachinovo garage.

Father Ivanovitch pumped the brakes. Muffled answering my greeting, they continued their occupation. I could not resist: “Hey, veterans, I am a “pig” got, prepare smoker!” “What are you, his car was hit on the highway?” — Petrovich Ivanovich looked at each other, not believing my words. “Yeah,” confirmed I! When they looked in the trunk, I gasped at the same time: “wow! Real wild boar…”

Carp pulled 9 kilos 800 grams. On the same evening was the smoked “pig”. And the conversations were just on a fishing theme.