This is not idle curiosity, it is a factor significantly impacting the future of Russia, as if someone did not want to believe. Putin has long been not just a person but a mirror of Russian evolution, to paraphrase a famous expression. 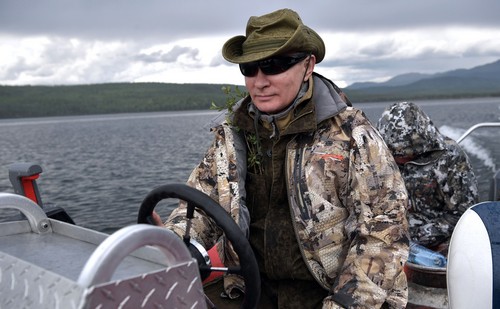 The rest of the President has always been one of the most interesting topics for all media, as well as fans of active rest. We have previously published a collection of photos of Vladimir Putin with a spinning rod and gun spends his holidays in the company of Sergei Sogui other interesting personalities. Here in Tuva in addition to Shoigu accompany Putin to come many persons, including on one of these trips before appointment to the post of mayor of Moscow and mayor Sergei Sobyanin. 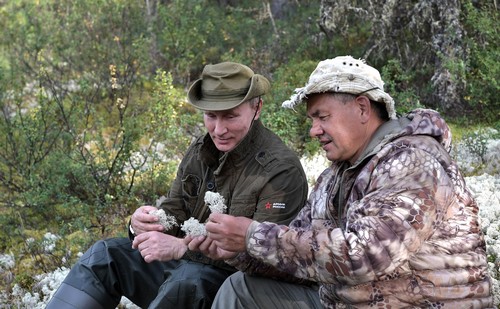 Full version of video about the rest of Russian President Vladimir Putin and defense Minister Sergei Shoigu in the Altai
Previous fishing Putin became the occasion for serious discussions and even exalted deeds. For example, Mr. Lukashenko could not resist and immediately rushed to catch catfish and certainly more than Putin, and Putin’s pike is not the first year provides food for debate among experts. The answer to this story we published on the portal. 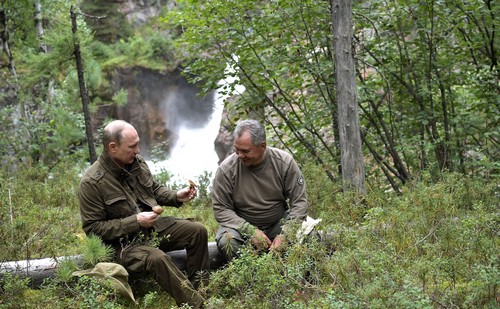 Putin likes active holidays, even your Birthday can climb mountains instead of the reception (of guests he has on all the other days rife). While this time the accompanying Putin faces were mostly dressed as the President with the symbols of things the Russian Army. How it all is going to the army is hard to say. 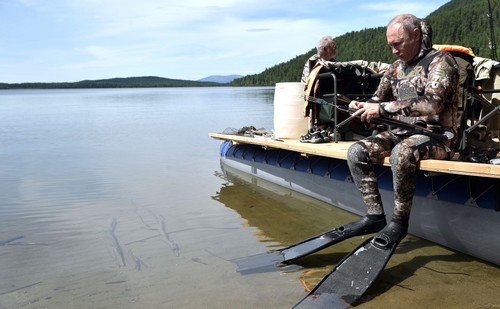 Diving for the President, too, is not new, we remember the story of the amphoraewhich Putin found thanks to the resourceful archeologists. However the brand of wetsuit, Putin wisely replaced by more acceptable, and the jacket is now more pathetic, from Sitka. Contrary to publicized reports, Gopro on the mask of the President more respectable camera Sony. Spoon the King Fish is also replaced. 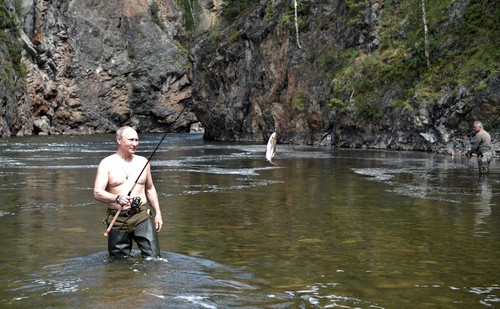 During a stop in Siberia, Putin and his delegation, the head of Tuva Sholban Kara-ool, the head of Khakassia Victor Zimin according to the press service of the fed what they got in the river, cooking fish soup and pike patties. 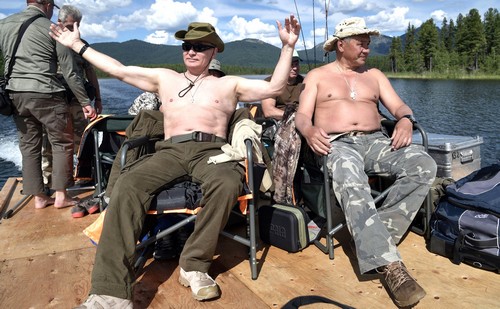 On the official website of the President photo report about the trip consists of 35 photographs and two video options. We publish only part of the photo and a condensed version of the video. The full version contains over 40 minutes of video. 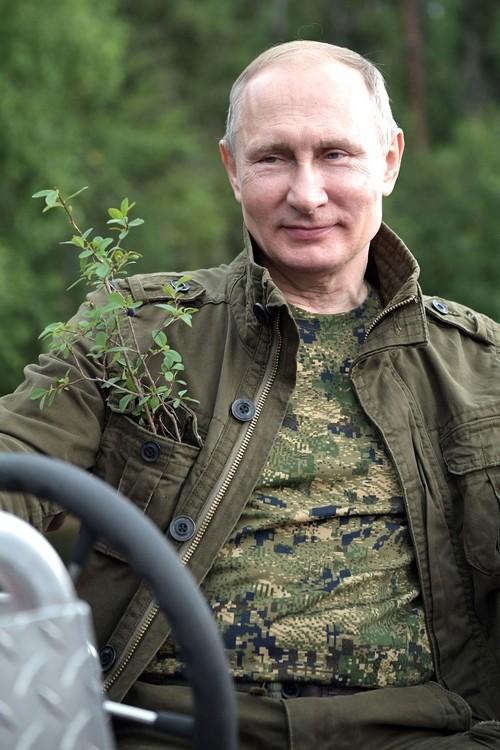 Many were intrigued by the sprig of blueberries in the pocket of the President, probably local hunters believe that it repels mosquitoes, therefore, provided Vladimir Putin this piece of equipment. Well, in General the same degree of usefulness as Sitka gear, and pasania straps with double D-ring with the emblem of Russian army is also from the what is it someone in the head bashed. 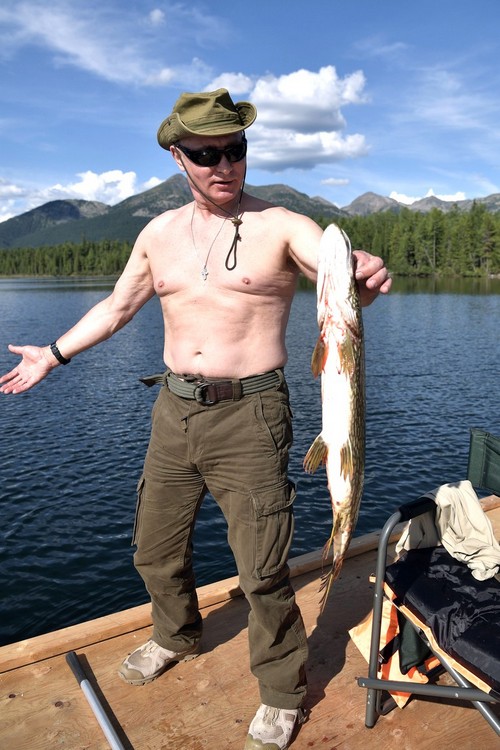 Pike, though not as large as last time, was shot by the President of omerovskie pneumatic medium from the second shot. My tone at the President’s sweating badly, which suggests that despite the 17 degree the President has not attended ancipolovskis spray, which has any trick. Yes, in General, and the equipment rooms, as last time diving in Bali is not the top position. 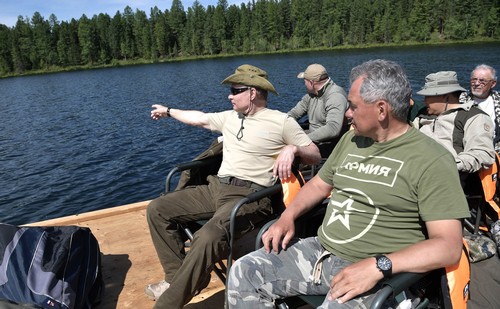 However, the lack of a ladder to climb on the raft is in the nature of the apparent sloppiness and violation of all rules of security is not something that the President, as a normal dive. On video it is visible that Putin blows under the platform and he’s trying to hold on to the edge of the raft is not equipped with handrail. And if his surge would be bad after the dive, my hands were cold, wet, slipped, went under the raft, caught the gear … Personally, I would be there for it all smoothed together with the protection, because of the General idiocy of ensuring safety. 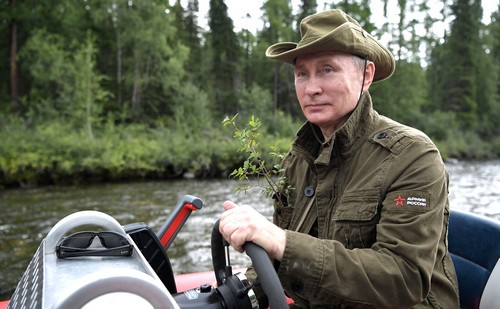 Vaninka panamoka with the Minister of defence also looked quite strange, I hope it’s not the posh quirks of the speaker, and the fact that there were on the occasion to the Museum staff, together with the absence of the head. However, judging by the sprig of mosquito, the basic lack of antifog, ladder, same ranuncolo Trouser belt Shoigu as his hat and strange clothing with symbols of the Russian Army, there has long been surrounded by settled parquet kreakly instead of specialists. 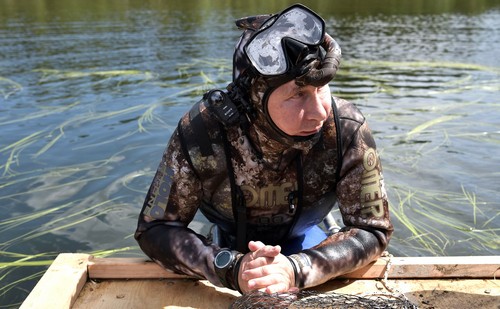 As for Putin himself, all quite positive, shortness of breath is absent, the Reds face he himself did not naplava, boats and boat manages quite actively and quickly, without doubt, behaving quite positively and smoothly… In General you can not expect other President than this from Russia, thank God, in the next five years will not be exact.