When winter fishing without a nozzle on the game, especially perch, roach and bream, as well as when trolling predators, many anglers prefer to put in line one after the other two lures, as they say, a train, or a train. 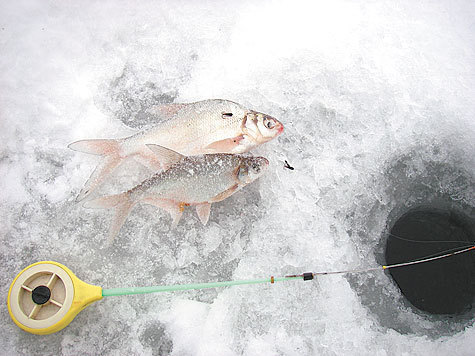 This files most often above the bottom of a large “Jack-in” at a certain distance bound is also “devil” of the same or smaller size. Game tandem lure is most effective in a strong thaw, and at last the ice at this time, the fish often stands high from the bottom, sometimes even the line is necessary to shorten a meter or more high and make the transaction. Also in the upper layers of the water, the fish can rise up in gluhozime when at a great depth in the bottom layer runs out of oxygen supply, than, for example, signals the death of the live bait on Gerlich. In addition, it often happens that in the winter the fish are biting poorly or not at all is caught on a bigger bait (jig, “devil”), which you can quickly reach the bottom at a great depth or appreciable current. A “locomotive” of two relatively small and light faux catchability and to the bottom to lower it succeeds without any problems.

The lack of additional equipment, bait, despite the good efficiency, has always been considered a high-frequency links over the ice of one of them when playing a fish through the hole, which usually leads to a descent of trophy or breakage of the line. And when fishing in heavy snags no end of problems, particularly if caught, for example, the lower “devil”, and the top fixed on the line still on the node, then unhook hangs on the top of the lure, allowing you to fight off the bottom.

The only solution, justified itself fully in practice, was moving the location of the top of the lure on the fishing line when the support for her bottom is firmly seated on the snap line small rubber band (for two) – special sets of the retaining rubber bands of different size are now being sold in fishing tackle shops, stoppers are already pre-put on the section of the line, where they are easy to move on the snap. When you bite on the top bait, or engage it when potice will “slide” along with the stopper to the bottom and out of the water with the trophy retrieved as a single unit. However, there is also a small problem: the “resistance” of the retaining bands is often not enough to hook the top of the bait securely rides the hard jaws of a pike perch, bersha or perch; in addition, when you “empty” the bites or blows to the top of the lure it together with the stopper can slide down, and then have all gear removed from the water and fix the mutual arrangement of the lures, which greatly slows down catch. Here it is necessary to do so: under the retaining band in place of its fixing should be on the fishing line tie a knot, which passes freely through a hole in the upper body of the lure. This knot will not affect the overall strength of the snap-in because the bottom bait is inevitably linked to the site, but now if you grasp the fish to offset the stopper will require a greater effort and it will surely be enough for a reliable trip, and with empty bites the stopper will remain in place. Furthermore, if the widened horizon of catching fish, the knot under the stopper for the top of the lure you tie on the line in a different place and fix the bait at a different distance from the bottom. 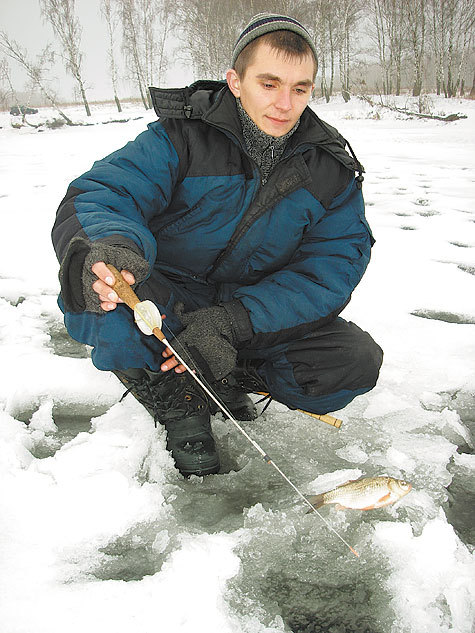 And yet, from whatever small baits nor was composed of “locomotive” in the middle of winter there are times that the fish begins to bite very poorly even on them, and requires that at least one of the draws was even smaller. In this case, the above “the devil” or just end a sinker weight on the line, as well at the stopper, is sting up a small hook on which either connected compact wet fly fly, or simply planted the ball of microporous rubber in black or brown with a diameter of about 2-3 mm. Instead of the porous rubber on the hook can be tightly wound such as thickening of black or green thread, which is then cut so that there is a short “antennae-legs”. For the manufacture of such “suspension” is suitable hooks 16-14 numbers (international numbering) used in the knitting of fly flies. Such a hook bent inside ring, so worn on the line, it will be located in relation to it perpendicular, which is a necessary condition.

Another topic is the use of “suspension” or with winter baubles, or with the balancer. Here as an additional and smaller baits suspended not only from above but from below, may be another spinner, jig, fly, and “devil”, and a special hook with a thick coating of bright colors, such as bloodworms, also used a variety of “eyes” with a fluorescent coating. In this case, an additional trick can be tied on a short or a relatively long leash as it hooks the basic hard bait and set on the line above it either motionless or moving with a locking element. When applied to small additional bait, when fishing predator, often perch on, along with frequently pecking and “peaceful” fish, such as roach, Chub, IDE, bream, silver bream, and even bleak Dace with. Typically, such “by-catch” happens when an angler can withstand long pauses between successive cycles of trolling.

A curious method of catching winter carp in those waters, where he is active in this time, was developed by the fishermen in the capital region – it only conditionally can be called trolling. On the end of the fishing line is small or average in size and weight perches baubles, and above it is no fixed, freely sliding on the fishing line before the spinner threeway. On areas of concentration for carp fishing techniques that snap-in is as follows: measured descent with the expectation that after tossing the bait up the jig fell to the bottom, and the scaffold remained tight, nod slightly loaded, so that responsive to the bite. When the promise of the spoon up and then free fall the Threesome escapes to the fishing line above the bait at 10-20 centimeters, and when the spoon reaches the bottom, he for some time slips to her at this moment Karas, and not only he, firmly, “in the mouth” enough the Threesome. Along with carp, are the grip perch, roach, carp, pike. Of course, sometimes bite and carp on the main bait on the bottom raises a cloud of turbidity and thereby attracts fish, but they are rare and more often expressed in the form of podragivanija in the head. And yet, sometimes considered by way of carp caught is much better than a jig with bloodworm or “of the devil”. So in winter, especially in a bad bite, experiment with “suspension” is necessary, and the results can be unexpected and significant.