Sometimes biting it is quite brisk, and we already more or less worthy predators. The same applies to perch. In reservoirs and large lakes there are also good outlets large perch. And it happens that trolling in a plumb brings the best result. From time to time, in the days of relatively warm and quiet, enough trolling and pike. Only now she’s holding closer to the bottom and takes better while the speed of the transaction. 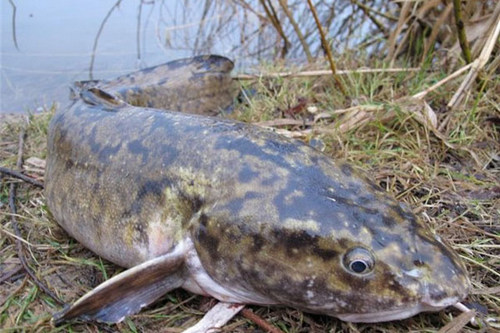 The rest of the fish, especially cyprinids, in the off-season preparing for the winter and cold water reacts quite painful: it becomes sluggish, a little feeds and goes back closer to wintering holes. Only pergolide and the establishment of relatively strong ice, some of the carp, having adapted to new conditions, begin to move and feed, although the activity is still weaker than the summer. This applies to the roach-the roach, white bream, bream, sinets, sope-white-eye.

The most effective gear for catching burbot can be considered a bottom. Moreover, the usual zakidushki more comfortable in the process of fishing as the tackle is simple and pretty rude. Does not require grace, subtlety fishing line and small hooks. On cold nights, when you catch burbot, these benefits, which are usually shortcomings, and help the angler to somehow compensate for the peculiarities of late autumn: drizzling rain, the first frost, icy wind, icy water, which in any case have to contact the night hunter burbot. Stiff cold fingers is hard to control the subtle gear. Easier to catch zakidushek because in the dark, by flashlight,, thick lines, large hooks with a long forearm and a heavy bulk sinkers better on the beach than delicate float tackle or rigging donok-rods.

Make zakidushki from old fishing line lying around in stores, with a diameter of at least 0.6 mm. Expensive fishing line to put on zakidushki does not make sense. More subtle is confused in the dark, will be sorry for the lost meters of the good line.

Sinkers can be cast in the old spoon. For the fall not the rushing waters of such goods is enough. You can buy in the store ready sinkers corresponding weight. If you pee yourself, before pouring molten lead in a spoon does not hurt to spread the fat to the finished sinker is better separated from a spoon. The hole for the fishing line you can drill or punch then.

Hooks is better to put with a long stock. If you don’t intend to bother with pulling the hook from the mouth of burbot, it is easier to prepare in advance at home leads. Fishing, simply attach the leash with a hook to the clasp with swivel or quick tie it to the loop on the main line. It will be less troublesome than poking around in the jaws of a predator of the night, studded with small teeth. And the fish can be stored longer live, if not to the surgical operation on the recess of the hook…

The main fishing line is wound on motoviltse. Higher weights at a distance of about 10 cm attached to the leash. It is better to put one leash, as demersal fish, burbot takes the closest to the sinker hook. And extra leashes just difficult to catch. Besides, the second and third leashes can catch on the cast for the clothes, in the worst case – by the hand. A throw can be done after a pendulum swinging sinkers, holding the line for a loop or a knot above the sinker at a distance of about 40-50 cm If to keep just for a smooth line, it is very likely that when casting with wet hands just slip the fishing line between his fingers and casting will not take place. When you do not want long-range casting, it is easier to throw, put the hook attachment on the flat part of the anchor and pressing a finger. In fact, if you throw a stone… All these simple little things help in night fishing, especially if the hunter mustachioed predator – beginner.

After casting the main fishing line is fixed in the splitting of wicker and on the line hung the bell. Clip it with clothespins and other devices makes no sense on such a simple tackle. Easier to skip the double loop of fishing line into the eyelet of the bell, and the bell in the loop. Then tighten the noose. Pretty thick fishing line makes it easy to remove and put the bell after casting. If the shore is sandy, you can not remove the bell from the fishing line, and throw with him. After casting, it is sufficient to rinse the indicator takes the water to the sound of his was full and melodious. Then tighten the line and insert it into the split rod. This is easier to tackle on a cold night.

As a nozzle in autumn you can use earthworms, dung and Nightcrawlers. The latest in the cold is rare, but sometimes Nightcrawlers meet on the ruins of an old house, under the layers of roofing material and other old rubbish. In the absence of Nightcrawlers, the best fit is larger than the dung beetles, earthworms. They must be mounted in large “lobes” with long tails. Larger fish prefer live bait and cut fish – Bursch, perch, bleak. Ruff do not have trimming scissors. Burbot is able to make with ershovite spines. But the large burbot bite on live bait and cut always happen less frequently. So stick on hooks should both. Otherwise there is a possibility that the bells will be silent all night.

Place for catching burbot is chosen by eye, but it is always necessary to take into account that sloping Bank of a narrow river usually decreases and goes into a hole on the opposite Bank. Here and should stay. To throw bottom gear with a steep cliff is often impractical, because in the pit burbot “holed up” during the day, and the bill goes to the crest and slopes to the hole, sometimes just beyond the shallows. In the pit, moreover, possible hooks for snag.

In places inconvenient for catching burbot from the shore, overgrown with bushes and undergrowth, you can use donkey-rods or spinning rods with donkey. If the shore is not suitable for fishing from the Bank, but nevertheless clearly on this site should be burbot, you can place the boat fixed gear. Most interesting to tackle, from the point of view of aesthetics and gambling – clubs. Classic mugs-shifters are clearly visible on the reach during biting due to its white “belly”. Typically, the upper part of the mug is painted in red colour, bottom – in white. During the grasp, the circle turns. In the light of the flashlight visible bite pretty good, if tackles are not so far away. But unlike running circles, moving by the will of winds and currents, oblavlivaemye different parts of the reservoir, for catching burbot mugs set on the anchor. Even conventional bricks-stones. The stock line just in such circles burbot should be limited – just under the depth at this place, maybe with a margin of 2-3 meters. Otherwise, the predator will easily get the tackle in snags. And then only remains to cut the fishing line as the fish sits in a driftwood hollow. There is a modification of a circle, more like winter imitation fish. Such a set is more beautiful in the bite than the traditional circle. On the mug are mounted coil and spring with the check box. The coil can have the possibility of rotation in the plane of both horizontal and vertical. For coil installation the latter option requires a small stand, which is already mounted coil. In the first case, simply secure it to the mug with a screw, glue or screw. Opposite the coil is mounted flat or twisted at the base of the spring with a flag. For night fishing the box better to use white color. Lit by flashlight, it is clearly visible in the dark. During the grip coil is rotated and the box rises, signalling the bite as in winter. You can even use winter imitation fish on the racks, anything not altering, just adding coasters imitation fish foam floats…

Not to shiver from the cold at night fishing, you need to take care in advance of a warm bed. The best option, of course, the hut-hut. The dugout or pit-house will also provide a fertile heat. But in the “wild” coast, you can meet the cold autumn night relatively comfortable. If the shore is sandy and you have a tent, you can during the day to warm up by the fire place for the proposed installation of the tent. Before installing it you should remove coals and lay first a thin branch, and then spruce spruce branches or reeds. At least half of the night will be able to go to the tent and warm up, drink tea, and of something else, in moderation… We usually installed in a small tent stove. And then it is a real housing…