Despite the possible return of the frost, the ice, everything was okay, and the fish on the lengthening of the light day felt spring. Accordingly, changing its behavior. 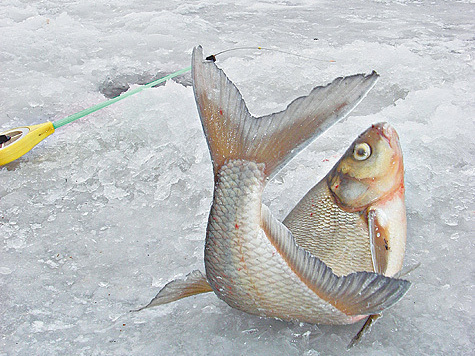 In closed water bodies bream is traditionally known to the fishermen of the place, that is, the channel and channel drop offs. For entering the watering time has not come yet, so the search is simplified. It is still impossible to speak about any appreciable concentration of this fish in large flocks, so it is very often observed when only one or two holes, the fish caught, and from all the neighboring no or happens a separate bite. Well if this happened when in one place to catch a few dozen anglers, then the explanation could be find in the tackle, the bait or the ability. But no, the picture is similar when caught alone, in the absence of competition. From this it can be concluded: finding a Parking lot of bream, you need to explore all of the surrounding area. The pack may be small, but concentrated literally at one point. As soon as the reservoir begins reset spring water, the fish will slide down below, to deeper places and remains here until the last of the ice. This is usually predplacene area. The other part of the herd will remain in the riparian zone, and another part of the Pisces will tend closer to the upper reaches of the reservoir. The closer the heat, the more the fish will move across the pond. During these movements, bream become active, but it will always have to chase like a pack of perch.

Best seats yet should be considered sloping the lower edge of the channel.

If the slopes of riverbeds are very steep, it is better to look for another area for fishing. Very rare at this time, the bream, as a rule, medium-sized, overlooks the deep glaze, but quickly slips closer to the bed. It should be noted that at the end of the month the picture will change dramatically and the fish will move into the glaze.

A very promising place where the riverbed makes a sharp turn. Moreover, fish, as a rule, is at the outer side of the turn. Here the edge and the slopes more gentle, and long. Apparently, the critical slope is determined by the fact whether small clam Zebra mussel to form their colony.

In any case, a win-win to start the search from the riverine irrigation and to move in the direction of a channel or pit. Finding the edge or start of the drop off into the channel, you need to drill several holes at different depths was found near the edge.

Finding a suitable site for fishing, it obzvanivaet holes at a distance of approximately 10-20 m from each other. Now you need to determine the exact location of active fish. For that anglers take a fishing rod with a jig or Jack and methodically “check” all wells. The idea was to see the one and only bite. Bite, usually very neat – it takes a “scout”. Next place I want you to feed and, having overcome myself, to look into the district one seat, as expected for active nibble on well during the day. Then it all depends on gear, fishing technique, but more about that later.

Very often bream selects a particular horizon with a depth from 4 to 8 meters up to the surface above the pit or channel and does not want to sink to the bottom. And no bait does not help. This situation is typical for deep pits and reservoirs with a large number of deep pits with steep slopes. This is because the upper layers are moved crustaceans – Daphnia, Cyclops, Scuds. The reluctance of the bream down to the bottom of many ponds is maintained until the melting of the ice. On such bodies of water the fish bite only at night, and even then not every day. Night bream falls to the bottom, but can react to the bait and bite and can’t bite. Fishing becomes very dull because it is completely determined by the whim of the fish.

For the regulated reservoirs, the picture is now quite different, since the water discharge is already underway. Here bream are concentrated in flocks that started to move. Move those while tied to the bed, the fish concentrated in deep areas, but it is still there where the current is not strong. Till the moment of approach of fish to the mouths of the rivers is still far. Many bream can concentrate above the dam, but at some distance, where the flow is, but weak, and in sufficient depth. In the Volga reservoirs are the hardest to find bream in places where the width of the reservoir is large. Here the pack of fish roam a huge territory, and stumble upon it often during the search for walleye. Where the width of the reservoir, but rather, a deep channel part, a relatively small, to look for bream is as in the pits and on their slopes and outputs, and on the lower edge of the channel. As in winter, are promising places where the riverbed is wide and has almost the same depth. The location of the pack will depend on the strength of the flow. The wider track and more depth, the current is weaker and more likely to find fish here. We must not forget that regulated reservoirs water discharge is uneven and varies as the day of the week and time of day.

On some large reservoirs have already started progress swarms of bream in the deep side of the confluence of tributaries. If the depth of the inflow is comparable to the depth of the river, bream and skimmer bream started up.

Traditionally the tactics of search two. One fisherman chooses to place his lure and waiting patiently for the approach of fish. Sometimes a few days. At other tactics bream looking for without being tied to a particular place fishing with a jig or the devil. Search this rate of movement is reminiscent of the search for perch. The matter is complicated by the fact that once a flock is discovered, to hold the bait rarely. Bream, and perch, no matter what comes his way, with which it can be rolled, only frightened.

A very common case is when a flock of bream starting to move in a circle among multiple pits on the river or a reservoir, and almost always he moves next to the perch. There’s sometimes don’t know what will. Characterized by the fact that the movement is happening strictly on a particular horizon, in half-waters. Such places to the last ice become like a sieve. New hole drilling is not necessary, because these places no longer remains. After a few days of this “rut,” the fish leaves the area until next year. It should be noted that transitions between the pits is sometimes possible to catch good, but at night and with bait.

It is worth saying a few words about the search for bream on small rivers where it is now intensified. Usually these rivers catch perch, roach, bleak and gudgeon, but you can catch, though not large, but of bream. The fish was obviously beginning to move up, leaving holes and occasionally going to the core of the flow. This is to me somewhat unclear, since the melt water is still not in sight, and the fish in the rivers has moved. If the river flows into a regulated reservoir, the upward movement in a few days, replaced by a movement down the river, which is largely defined as the rate of discharge of water on the main river and the development of melt water. It may happen that the discharge will be small, and the melt water will go, then move down again shifting upwards. Fish will begin to walk, and know where she is now, not easy, but interesting.

The most promising places to search for bream on small streams in the vicinity of the deepest places. The rod and line current can be too strong, and then the bream will take place from the inner turn side of the channel, in the vicinity of the pool. I usually always find bream on the edge of the current, even if the border is on level ground. Facilitates the finding that the bream almost instantly responds to the bait and bloodworms. The search is complicated by the fact that the active bleak often does not fall the bait to the bottom. Very good results gives the use during the search for Jack.

In General, to look for bream now possible and necessary, and the tactics of active finding and catching becomes more efficient expectant.