Quite painful period of freeze-up for carp, when many of them hibernate, while others are lethargic and ill take the head for predators – it’s time to gambling and hunting. The outputs of the pike on the imitation fish bring at this time the best catches, sometimes it happens a lot and grasps on spinners. And pike do not stop and okuneye lures, often biting off-trim them, aimed at the barbed Humpbacks. Perch as recklessly chasing small fish, at the same time avoiding greedy pike mouths and along the way, rushing for playing the spoon. 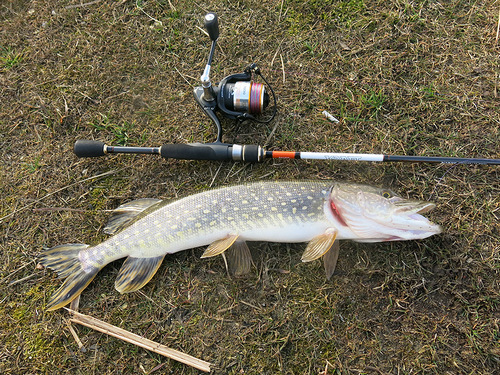 Apparently, frequent perches grip on the dummy related to the fact that and are quite active at this time Bursch-roach has not yet decided on the permanent feeding grounds and habitat, lack of exercise and standing in the grass, not yet fallen to the bottom. Besides, small fish clearly scares reckless-assertive pressure carousing predator. In short, the pike and the bass is simply nothing, even where there is a lot of stuff… Sometimes it is almost impossible to catch smaller fish for the nozzle on tees zherlits. Being in a small forest lake, I spent all morning on the capture of live bait, and somehow scratched two okunishi, dropped one of them into the hole, exposing the imitation fish. As soon as the bait began to fuss in the ice, like a strong jerk almost threw the fishing line out of my hands. Mechanically cut fish immediately huddled on the ice. The grip on the second okunikko not too long to wait. I put only now the imitation fish as “lit up” check box, and another pike splashed out from the hole, safely caught all three tips of the tee…

Often in the beginning of the winter season can get to gambling and catch the predator, using a variety of hornblende. Speaking of lures, it is possible to note some differences between snag for fishing on the course and in the almost still water of reservoirs and lakes. On the often used narrow lenticular spinner, quite tiny, weighted by the hook, weighing from 10 to 50g. The most popular colour is Matt silver, but usually bleszinski he finds his lucky lure. There may be different variations of silver with brass or copper, tombac, and cupronickel. The course is usually used spinners with soldered double or single hook. In places without flow or with low flow used ploskovaty bait with suspended trinicom, which can be downy red hairs. The technique of trolling is fulfilled with experience, but the basic rules are the same – finding the bottom, lift the bait about 10-15 cm (this work), then swing the spinning raise to 30-40cm and is lowered to the working level, followed by a pause of a few seconds and repeated again. Speaking of the pike perch and bersh, it should be noted that in recent times happens that the most advanced and expensive baubles may yield some aluminum scratch, but with a planting of fresh sprat. “Naked” lure the predator often refuses to take not only today but yesterday and tomorrow…

With the advent of silicone baits jig increasingly began to give way to heavy jigs and jig heads with Twister and vibrohvosta. The only “but” – a lot of retirements and breakages of tails twisters. Subsequently, I was equipped with jigs and jig-heads 3-4 cm short leashes with young twins, gatherings became less.

Ways to play different lures, ranging from tapping on the bottom, you can check the version of the game the usual jig with ascents and descents, and then a way of trolling, although it is less common. Whitebait, with more and smell, it is often more advantageous than silicone. She can sit down as twisters, extra leash, which also reduces the likelihood of retirements.

Often success can bring balance weights, as they work almost like the old spinners, namely, in the horizontal plane. However, this has the disadvantage that the flaps often catch on snags.

On the current and depth are used quite large baits – 5-8 cm “Head” of the balance weight should be slightly raised due to the shifted center of gravity, otherwise good game can not be achieved. The lower tee is required (because the predator often takes across), but often have to put yourself as available for sale balance weights with very small and weak tees. A Threesome can be hung on the clasp or small crown ring and equip it with the “amusements” of red hairs. It is possible to plant and sprat, often ponytail. Colors of baits may be different depending on the reservoir, but most good combination of red and yellow or green and yellow. The plumage of the balance weight preferably from Plexiglas. Bristles and metal, in my opinion, worse. Above the balancer you can tie a short leash with a tee, equipped with so-called “fly” hairs red or a plastic tube, or hook up with replanting the smallest of a shad or Twister.

Fishing technique is the same as trolling. Finding the bottom, the lure is lifted by 8-10 cm, then, in obedience to a gentle hand movement, it goes up to 20-30 cm Height is evaluated empirically in each case. It happens that the balancer has to raise above half a meter. When planning bait to the bottom, it is desirable to control her fall, watching the balancer with a light line tension, giving full slack.

Before lifting the lure to knock the balancer on the bottom, raising a cloud of turbidity. Pause 3-4 seconds, but in some cases it may be 5-6 sec. Sometimes success can bring smooth game lure, as in fishing tackle.

Walleye, Bursch, pike and prefer hunting areas with sharp gradients of the deep: the edge, slopes into the pit, old rivers, ridges of rocks and the depths of 6-10 m.
Back to silicone baits and the wonder-fish, sprat, it should be said that the inquiring anglers contrived and created another hybrid snap. On a fairly strong current near the channel and the depth began to apply something similar to the chassis ground in the winter performance. Heavy jig head and sinker better Cheburashka with ears and a tee (more flexible plays for), nagisetty sprat sits or silicone (for the smell – it’s whitebait); above the line is tied on a leash with a length of 20-25 cm with a heavy jig, on which nasazhivajut the same sprat or lobe worms, rarer waders. The gear sinks to the bottom, jig head, or “Cheburashka” is venting a bit, and then spinning with a hard nod is set in the hole, as usual Donk. From time to time can be made long action of the spinning by returning the jig head back, and again to pit downstream. This tooling often is offended bersh, but you can catch perch and even bream.

Spinning to trolling is quite long (up to 50-70 cm), with a hard whip and a big coil with a diameter of about 10 cm is Desirable to have several Ugolnikov under different conditions of fishing. Fishing line – braid 0,08-0,1 mm. It responds better to the bite and stronger than monofilament. For a little frosting it can be greased with glycerine.

Fishing Gerlich focused more on the pike, but if you set a goal to catch a walleye on a live fish, the success is not less likely.

Pike are often caught in places not very deep: three-six-meter depths, on the drop-off – drop to these depths. A particularly successful and profitable fishing in the snags, in the flooded forests, river-beds of former rivers flood zones of reservoirs. It happens that pike “paths” are at a certain distance from coasts and Islands in areas where the bottom topography is smooth, with the same depths. Apparently, pike is here on the utility bills. I usually put imitation fish on such a featureless plateau with the same depth perpendicular to the shore or the island with a broken chain. At the first secure his grip predator imitation fish exposed to “the firing line”, parallel to the coast or the island and also zigzag. Most often this tactic works, and pike takes it here.

I have adopted the imitation fish type of stand-strut-coil-spring with a flag, the, in my opinion, practical and easy, but parvaldu often use imitation fish-tripod. They are not dropped by the wind on the bare snow-free ice.

Perch is often caught together with pike, but in deeper areas (with a few aforementioned exceptions) closer to the fairway. Coming to the Gerlich potamo still, we always found two or three of the raised flag and usually one big walleye was on the hook. Before the morning passed into day, namely up to nine hours, we caught usually two or three good perch, and then began to take pike.

If pike as live bait for almost any small fish (sometimes even fish), the perch is better to offer a narrow elongated “Belle” — verkhovka and bleak, which in winter is not easy to catch, but early in the season is possible. Somewhere verkhivka picking at the bloodworms under the ice, somewhere it is caught in the hole melanocytoma. Gathering with Gerlich especially for walleye, I usually caught the day before on our non-freezing near the town the river bleak conventional light float rod. Was these gentle fish in the cold water hareruya compressor for aquariums. On the way to the Volga added the air a pear-enema. Usually dovozil of bait fish lively and viable, despite the well-known “quelet” bleak. Almost always, these efforts have brought success. Putting imitation fish with bleak somewhere near the fairway, the drop off in the pit, I usually blesny. The boxes had barely begun to “play”, it happened a bite and a snag. Came a flock of fattening walleye. The only thing that changed in a snap Zander Gerlich is leashes and tees. Instead of hard steel leads braided or nichrome, I used tungsten and tees were replaced with № 8,5-10 at No. 8, old numbering.

Often after grip fishing line instead of go deep, started a loop to bend up. Zander began to rapidly rise. We had to pick up the slack and reel it in again, and more vigorously, otherwise it was a possible gathering.

Fishing for pike on the imitation fish is no less exciting than on an artificial lure, and in a good location and conditions as profitable.