We’ve been going to visit Il, but all somehow did not develop, and then got into the suit. On a large river unbearable because of the heat, on the IR infinite pressure, but the IZH is almost no demand. And because there are fish, and the river itself is picturesque, and not friends with her our fishermen, especially the spinning… 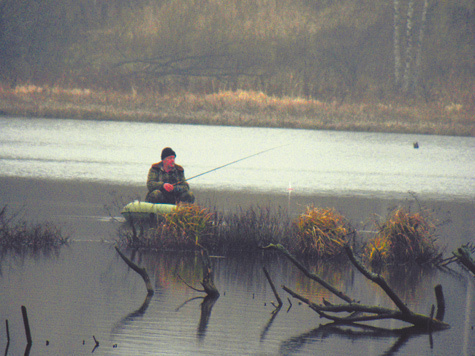 We go overnight, and then evening and morning — our. And if suddenly inflated insomnia, and at night you can try your luck. According to tradition, had difficulties to find a good seat. Good — not in the sense of fishing, and for launching boats on the water. Place found: the topping over the hill, was on the sand. The sand just seemed questionable, and the return journey is confirmed: barely got out, but that was then.

Unpacked and in collaboration with the gadflies and horseflies boats pumped quickly.

In anticipation of a date with IAM I remembered their past exploits there when Chub and Chub hindered a raft. This time in the first place was ultralight, which promised to haul obscene amounts of fish. Spoons, turntables and valerochka of all kinds were ready to jump into battle right off the bat.

They rushed, only “pit” was silent. Just looked sluggish, and has already claimed over 5-6 turns, when I realized that happiness must be sought in the jig. With the jig on Others it was always less fun. Only once in the past year we tried there jigowatt and I even caught a pike with three points, but bites were few and snags — utter set. That’s the reason I gained all that I had time to build on opsenica.

My friend from the start went on the motor up so we don’t interfere with each other, and its success was not known to me.

Jig start immediately cooled my ardor. Even avseniki driftwood lashed out with all the anger, and the first bite I had already noticeplease enough, and even something ripped. But a blow is a blow, and I with new forces climbed in the middle of it. On the fourth shot, I technical difficulties pulled out the hairgrass for kopeck piece and was pleased with himself. And the bite disappeared.

Soon came the roar of the engine and comrade reported that the ultralight did not get down, but no release of fish not seen. He immediately was converted into the jig and we are already side by side began to hang lures on snags. Then I conceded, as his “seaplane” foam rarely returned to the boat. But I’ll give him that: with such outrage that he caught two perch kinoshnyh. Approaching twilight, the heat continued to vandalize, and had a mobile phone to call a relative from a nearby village to pick up fish. Ear we hadn’t planned, and to keep the fish till the house was unreal.

In the most extreme point of our rafting was sitting on the shore three fishermen. They caught on a regular zakidushki, only the object of the hunt was… a perch, and catfish. It turned out that they there is often fish and perch catches always. Catfish, of course, less. Showerheads are real verkhovka and bleak, where they get their lift on the spot. Interesting, but we catch only on Others.

We decided it was time to go back to the car. Get at dusk and rising on the motor, was surprised that he went that far.

The fish gave, delicious dinner and I fell asleep. My friend got a can of worms and made zakidushku. Don’t know how much he wrestled, but a couple of skimmers edible morning I found.

The morning was cool. There is hope for the revitalization of the bite, but in fact nothing has changed. We went up river and found there the endless fallen trees. For a couple of hours raboty active in the windbreak, we did not wait for any attacks on bait. There was a sense that such terrible snags, even afraid of fish. In the end, came down to last place and I caught a nice walleye by the way, for me, the first village forestry perch — pike, Chub and Chub.

And then came the heat and the tube flew to the shore. Washed the boat, bathed while they were hanging, and then trying to get out of quick sand, burrowing deeper. I have already decided that a couple hours of excavation work on demolition of the hill provided us when Niva misunderstood way suddenly jumped out of the trap.

The findings did not, but the observation was. First, a predator on Others like a little, a pit has never been even two attacks. Despite the fact that the IR or Vyatka to catch one of the pit 5-10судаков — it is commonplace. Second, snags, little adapted for jig: even nezatseplyayki there are a lot of remains. Still the number of hooks and bites should be balanced within reason. Thirdly, the average size of the fish caught in Others much more. Us for two trips not caught a single fish less than a kilogram. This is good, and somehow I think despite the technical difficulties, we will go there soon for the third time…