In pursuit of gourmet and medicinal burbot liver and less tasty meat, fishermen deliberately go to all sorts of hardships associated with night fishing 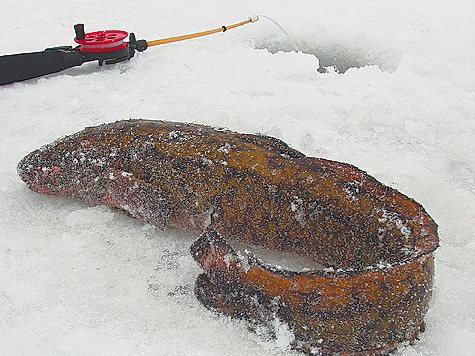 Burbot probably the most mysterious fish of our fresh waters: when the other inhabitants of “wet Kingdom” comes the most difficult times, associated with almost complete isolation from the outside world in the middle of winter, burbot comes time for the sacrament of procreation – in the icy, Blizzard weather of winter, under thick ice, where no light breaks, this fish spawns, denying all the stories about gluhozime.

Burbot is actually freshwater cod and these fish can not live in bad water, especially to lay eggs. So if other fish in the harsh period of the year in the “burbot” the pond behave passively and poorly peck on fishing tackle, neither of which the lack of oxygen in the water, apparently, still can not speak – rather, the other fish have at this time, biological changes the body, associated, perhaps, with the final maturation of the calf before the spring spawn. About the well-being of the pond and says the behaviour of ruffs during the period of burbot spawning. This ancient enemy of fish eggs, and a favorite food of the burbot in the waters being a recognized indicator of water purity, in February, the most annoying and just “off” on burbot caviar, but only during the day, when burbot go to the shelter, and at night, despite the spawning of mercy “prickly” there will be no.

In pursuit of gourmet and medicinal burbot liver and delicious meat, especially good in ear and aspic, fishermen deliberately go to all sorts of hardships associated with night fishing, often in terrible weather, after all, what makes it worse, domiciliee burbot fishing. Burbot during the spawning is not averse to pretty to eat, to recover the spent in the pleasures of love power, the more that the spawning often takes a long time. Special ban on the production of burbot during the spawning period, especially in the North, usually not entered because the fishing is not so massive, but the authorities as a water bailiff restrict fishing in areas where the most dense clusters of burbot, for example, on the spawning grounds. But “nesapratu” places fish to successful fishing is enough.

In the winter burbot did not go far from the shoals of ruffs, and they in turn try not to miss the “freebie” in the form of caviar that on different reservoirs is given in a fairly long period of time – from January to March. Usually, the pond to the South, the closer spawning to January, and Vice versa.

To select the area where to put the gear on night predator should activate that winter, the interests of burbot and ruffe are very close and tend to converge in the same places on a rocky or sandy bottom ledges, and on coastal sites with a firm ground, located near the depth or strong current. Themselves gear for catching burbot in the period of ice formation is quite simple – it usually samolovnye of postawski tied to a stick laying across the hole, where the length of the line equal to the depth, and at the end wearing the required weight sinker and detachable leash with a single hook. Taking the bait, the predator almost never throws, and immediately deep swallows. Because of the short fishing line, having no freedom of move, burbot then sitting quietly on the hook, and the angler remains only from time to time to circumvent postawski checking, removing fish along with a leash. About bait to worry is not necessary – it can be chicken guts and pieces of fish, the usual bait, but winter seems to be the fastest burbot are on the bottom at first frozen, and then pressed down on the ice and neatly impaled on the hook ruff.

There are more athletic methods of production burbot. It is night trolling on the “noise” spinners, and fishing for burbot with jigs special “knock” when the bait is monotone beat on hard bottom – fish is very indifferent to all sorts of gentle but precise sound, while the hook may not even have any bait. Grip burbot is expressed in one or two short jerks and suddenly dangling on the line of gravity – there should be a chip shot, and then leisurely pulling fish; the mouth of burbot strong, fleshy, hook it sits well. The main thing – not to give slack if the hard potica, relying on the fortress rather rough tackle, otherwise the fish will throw in the driftwood or the nearest shelter and confuse the line.

Anglers should also know that in winter burbot can successfully catch and day, especially after spawning, when the predator starts feeding period. This always contributes to the inclement weather with strong snow-storm, when day is as dark as dusk. To catch in such conditions, knowing the concentrations of the burbot, is easiest either at the noise the spoon, popular lately, “Balda”, but it’s better for the game heavy jig, baited with a worm or several large butterflies. Then burbot’ll just be a good catch among the Berchem and perch. However, the day is day, so in bad weather burbot likely to catch on maximum depths.