In 1978 I was given a vacation in the winter. From Belarus, where I served as a Navigator in one part of naval aviation, to his home in Krivoy Rog and I took the train. My parents live there. 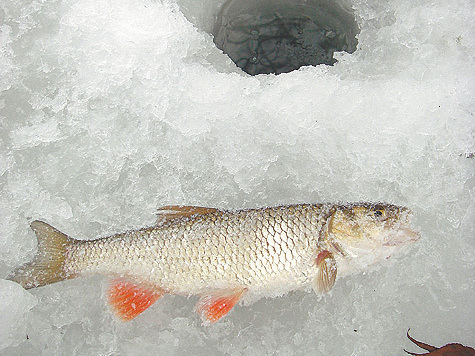 That will come, previously never reported. The next morning I was already on the spot. Familiar two-story building. On the doorstep he met mom. We embraced, kissed.

– Where could he be, on his fishing trip went, mom said. – Go, son, for this abnormal person, like at home nothing to do, while I set a fancy table.

Actually, the Saksagan river, near Krivoi Rog, a small, it would be possible and the rivulet called. But there was built Krivoy Rog power plant, blocking the river dam. Thus was formed Krasovskii reservoir, a popular place of recreation for residents and fishermen. Here are found bream, perch, carp, Chub, pike, perch, roach.

Wearing a Navy overcoat and cap with crab, I headed to the pond, bound solid thick ice. Weather helped fishers: ten degrees of frost, however, somewhat interfered with the fresh wind. After a couple of hundred metres, I came on shore. The ice was littered with fans of fishing. Someone sat silently, burying her look in the hole, and someone just this morning was fun…

Father learned from afar on the warm jacket and boots – this ammunition is no cold not terrible. He was genuinely happy about my arrival. However, to go home in no hurry: “You know, son, well, at least one fish in your ear to catch, and before your mother will be ashamed. In a few hours – not a single bite”. Knowing that the father is a passionate fisherman, I didn’t rush. He happily looked at me and sadly threw short glances at his three fishing rods with frozen nods. To support my father, I took his drill, and went in the direction of the feet, drilled a hole, planted fresh bloodworms on grey a homemade jig and adding depth (7-8 meters), dropped the gear under the ice. “Dad! And here I have 10 meters will, I believe, in a hole hit,” barely before I could say. A nod sharply worked and I began to draw out fish.

“Something heavy being dragged!” ‘I informed the parent.

“Son! Yes, you caught a Chub! A good handsome, 700 grams per pull!” I lowered the tackle back into the hole and again followed by a bite – again Chub! Seeing my fuss, sitting nearby fishermen began to catch up to us closer, they watched for opportunities. And I have the fifth Chub fought on the ice. Began quite predictable: they began to cut off on all sides, but no one bite. And I for a half an hour caught ten Chub. Then the bite stopped. Hand wiping the sweat from his forehead, not expecting himself such a success, I excitedly told my father: “Now in the ear, and zhareha enough, and before mother there is nothing to show. By the way, she had been waiting for us”. We have collected the gear and the catch and went home. And the fishermen enthusiastically accompanied us, saying: “sailors Know how to fish!” Though I and they knew that I was lucky because there was a period backlava – the middle of winter.