This is usually due to the fact that the seasons are rapidly changing the habitat parameters of the fish, and she just does not have time to change, to adapt, why is in a depressed condition. Particularly negative effect on underwater marine life affected by drastic level fluctuations and water turbidity caused by intense melting of snow, as well as a significant strengthening of the light at the end of winter – only in this case some deterioration of the transparency of water is good fishing. However, many anglers do everything possible to fish were not caught, or, on the contrary, did nothing to reverse the situation to their advantage. 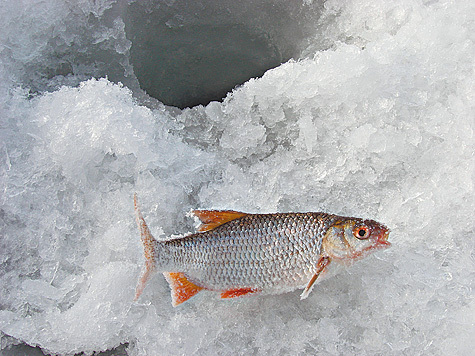 The most important thing in fishing depends on the angler, is the choice of the place of the object of fishing, tackle and technique of its application, as well as ways of attracting and enhancing fish. And miscalculation in any of the elements of the fishing skill in moments of so-called lack of bite is what creates the illusion of this backlava. But as they say experienced anglers: “If the fish pond is, it can not have…” a sinister pun. So, some fish, somewhere, regardless of what it is biting.

First of all, at the end of the winter season is a common mistake made by many anglers is the choice of fishing where they fished all winter. This is usually the deepest areas near wintering holes and channel areas on rivers and reservoirs. But with the beginning of snowmelt in areas of high flowage of the bed most rapidly changing habitat, what fish the first time avoids, moving as if in a neutral zone between the channel and the shore, because near the coastline also is saturated with melt water. And on deep wells in the absence of fish the flowage by the spring already can not be, because around this time the inventory runs out of oxygen and starts hypoxic phenomenon. So, when the reservoirs become visible pre-spring and spring progress before thoroughly to settle at some place, you need to make sure, but is there enough here the concentration of fish, because when a bad biting a high density of fish in a limited area and the resulting acute forage competition can count on the success of fishing. Of course, doing a lot of holes in the thick ice and over a large area, and then they turn to fish to find feeding fish is very laborious and time-consuming. Therefore, a promising place for fishing it is better to look for collectively, using for situation control portable fish finder with the necessary set of options. The device will be useful for the reason that it will show not only the presence of fish, and depth on which it stands. So, if late spring fish, standing in half-waters, may well peck, in the beginning of the season we need to focus on fishing from the bottom, because at this time the fish in the upper layers of the water, is in the state of adaptation and unresponsive.

Probably, many anglers have noted that the same external circumstances, including seasonal, different fish react differently, that is, it is either active or passive and is not caught. For example, at the beginning of ice fishing success is almost predictable, when the angler relies on a perch – the mass of the predator of our waters, which before the other fish adapted to the icy water. On an outcome of winter season “striped” is perhaps the most problematic fish if not kept in mind coastal a trifle the size of a matchstick. To catch bass in early spring, you need to have at hand a body of water where this fish lives in extremely favorable conditions and therefore have multiplied to huge numbers. But here, the best time of decent-sized perch coming in a short period when the ice on the pond is literally living out the last days, and it is late spring, which sometimes occur include a fabulous catches. But in the beginning of the calendar spring, at the time of acute gluhozime, when, and the weather is a whole lot of surprises in the form of a lingering cold or violent cyclone with snowstorms, it is possible to focus on catching roaches, always living in water in the form of dense clusters, occupying, as a rule, the same living conditions for a large area. This means that if somewhere on the pond successfully caught roach at coastal irrigation with a depth of about four meters, and in other parts of the same pond or another like him on similar places you can safely expect the same result.

However, to determine the waters where caught roach steadily, despite the difficult period of the year, have yet to fully consider a number of seasonal nuances inherent in such fishing: even if roach sometime and it can not bite, not every angler is able to catch a lot of it. Roach, given its rapid, toneless, furtive bites, serves as a stern examiner for those anglers who when building gear do not show necessary care and even meticulousness. First of all, roaches can’t go with tackle only one type, for example, with a jig or “devil”, not able to fit in everything there is at the moment the conditions of fishing and light float rod. There are days when roach prefers to take in the main from the bottom, then float tackle big benefit, because a hook with a bloodworm or other attachment is in any case much easier for the smallest jig that almost the most important thing when fishing this always hungry, but very cautious and sensitive to unnatural food fish. A jig of any shape just unnatural at the bottom. But when roach feeds in the water column, which is much more common, especially in spring when changing the fish feed ration, artificial bait fits into the best interests of the fish. However, not every bait and not any nature of its movements can encourage roaches to at least try the food. That is why in conditions of very heavy spring “gluhozime” often to see how firmly seated a dozen anglers good catches roach, only one, and the others all blamed on inherited his “happy” well. Think of monotonous watering with a flat bottom, the usual refuge platinix flocks, the presence of such holes is unlikely, but look at the tackle lucky angler and what his hands would not hurt. He probably uses the small bait on fishing line is extremely thin and long, as they say, “Ledovy” nod allows you to change the game mormyshkas or “devil” in a wide range of frequencies and amplitudes and in the end find the most effective technique is posting at the right speed, in accordance with the activity of not only fish, but mainly its potential food. In early spring it often happens that the roach are biting well only at very slow patike bait up and with a short stop at the highest point of the climb.

But few find the Parking lot of the spring roach and hold built right tackle, more important fish to make the bites became bigger and they were rather. It seems that many and practice, and “theorists” from fishing don’t quite know what it means to enhance the activity of the fish. And it means only one thing: to artificially force the fish to move more, “infecting” their relatives, because the information in the form of wave signals from moving objects in the aquatic environment is spreading very fast and far. There is in the Arsenal of the Fisher – of course, the bait, which is now in the old winter water is still useful, but it can be intimidating factor when ponds filled with meltwater. In those places, where was found a roach and if not current, do not be afraid to apply the bait from above, even if the depth of ten meters and more, as is often the case in quarries and river backwaters. First, sooner or later it will gather all the fish on the bottom that will let go to catch the snap with a hook and sinker, where a bite alarm can be a float, and sensitive pointer. Second, slowly falling to the bottom of the food will cause the fish to move vertically towards the food particles and followed them. To enhance this effect, the lure should be often and small portions, throwing into the hole a little moistened feed mix. By the way, roach is not at all the reservoirs required the presence of complementary foods feed bloodworms, she speaks tolerably well, and to clean the breadcrumbs and semolina. In this case to quickly create a vertical column of feed particles in the water column the bait helpful by more than half to dilute the river sand, but it must be done only at great depths of fishing.

Yet not a word was said about the situation of bream fishing and always surrounding it of white bream during periods backlava. Then you just have to note that when these fish do not bite often attempts to stir up or intensify lead to nothing – fish usually leaves the place where it is disturbed. Besides, in early spring the bream and like him shifted from winter stops, and until you can get to new places and do not adapt to other conditions of life, practically does not feed. So roach suggested as one of the options in the fight against backlevel, although this topic is not less interesting and ruff, and bleak, but it is a separate and no less specific problem at the time of the change of seasons.