Winter raged in earnest. It’s minus 15, a strong wind knocks down, uprooting trees. Icy tree branches leaning to the ground, as if asking something from mother nature. Chained frost and a thick layer of ice Crimean lake seemed to beckon fishermen and fans of the real Russian winter, which is so rarely pleases the Crimean inhabitants to its present severity.

In this weather you do not want to sit at home. A great desire to go outside to breathe the fresh air deeply and rejoice. Enjoy the sun, wind, snow and just beautiful February weather, which is rare, but aptly makes us happy. Winter in the Crimea 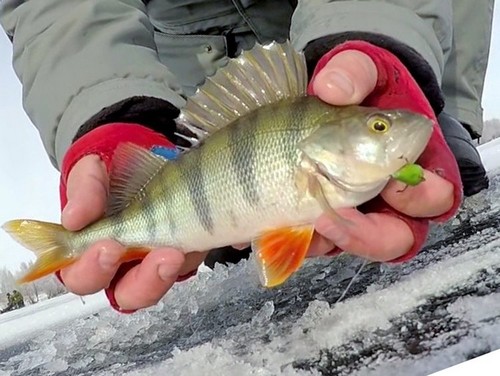 But it’s not about the beauty of nature and fishing, unforgettable time with a little winter fishing rod in his hands and the sea of adrenaline, which over the long winter had time to atrophy somewhere deep in the bowels of the body.

It was decided to go on the ice. For the first time to test the taste of winter fishing. It was so much desire in the past, but did not succeed. Can be interfered with employment experience first experience, maybe just laziness, most likely. Also discourage hunting present feeling that winter fishing will produce the desired excited as summer fishing. But as it turned out it was a wasted experience. But about all under the order.

As I mentioned above weather for winter perch fishing was great, about 10 degrees of a frost, the morning was windy. By lunchtime, the wind carousing, and simply interfered with the fishing. To cope with the thin line in the wind was very difficult. The ice is about 10 cm, fought a successfully without much effort.

The first object was Novoandriivka, long bets, where for one hour, was punched about 20 holes, but the fish was not. In the absence of a bite, we learned the basics of wiring, which was not hard to master and within an hour we left this cold, lonely place. Arriving at the second betting in Novoandriivka, we met the first of the fishermen, there is hope, but alas. Nothing interesting, fish wasn’t here. Secured past material transactions, and penetration holes. Despair, we did not and drove on. At the rate in Zhuravlivka so suspiciously the ice cracked under our feet that was not myself, but punched a few holes we calmed down. The ice was thick, but the bass was not. It was starting to become boring.

Next began the most interesting. Rates in the small village held a handful of fishermen, who with cheerful cries that he drew from the hole. The mood went up, there was a hope and not in vain. Caught on bloodworms. The first posting brought results. First bite and the first perch almost instantly froze near the wells on the cold ice. Became more interesting. The bite was good, almost every entry was successful, the winter bass bite is OK, though nothing to compare with yet, but I liked it. After hours of catching perch activity subsided, we began to change the hole. Nothing. The wind whipped in the face, blowing in this line sail, causing a huge inconvenience. I remember the carp in January, which we caught at the feeder two weeks ago. Was the same strong wind. It was the only negative of today’s fishing.

Because posting did not work, started to apply catch up from the bottom. The bites became more frequent, but catching bass was less. Whether the early sweeps, whether the weak activity of the perch did not allow to detect it. Thus, from the bottom, was caught only a few pieces.

Winter perch fishing lure Wobbler and was not successful. Did not want the bass to take on these kinds of artificial lures.

Summary of winter perch fishing was next. 2 pounds of perch were caught and decided to eat it. Outdoors the appetite to roam in earnest. Decided to clean perch and simmer it with onions and spices. Will paint recipe, because it doesn’t make sense. nothing good happened. Small bony fish that bad to clean did not bring the expected taste effect

Here’s the fishing was in early February on the Crimean Peninsula. In which we gained valuable experience and caught two dozen perch.