Spoons, turntables, equalizers, edible rubber market offers anglers a huge number of artificial lures of different shapes, sizes, cost. Although recently the catch depended solely on observation and ingenuity of the angler. The spinner tube – efficient lure that can be manufactured at home in the presence of material and tools. In addition to the effectiveness of the catch of freshwater predators – perch, pike, perch, this homemade artificial lure will cost the angler in a disproportionately smaller amount than, for example, silicone twisters, crankbaits and the like import.

Ease of fabrication of the tubular spinner allows you to “stamp” several dozen baits in a short period of time, which will give an advantage when fishing for predators in snags, where the phenomenon of s

ACEP with subsequent loss of homemade – not uncommon. Understand how to make the spinner up, and answer a number of related issue.

The types of lures tubes

Invaluable fishing experience of their ancestors in the production of lures allowed contemporaries to do at home the following types of tubular spinners:

Important! Speed posting is the most suitable option for homemade tube. Active twist of the coil, alternating with pauses, makes the animation of the lure, as two drops of water similar to the behavior of the real fry, who is injured or weakened. It’s very exciting predator.

Materials and tools for making spinners out of the tube

Made with their own hands baubles tube on walleye or any other freshwater predator, will require the following materials:

As the necessary tools you will need hacksaw, a small vise, but always with a soft lining on the lips, so as not to damage the surface of the body of the future bait drill with set of drill bits, a file. In addition to these tools you can’t do without a portable smelting kit for casting lead shipping. 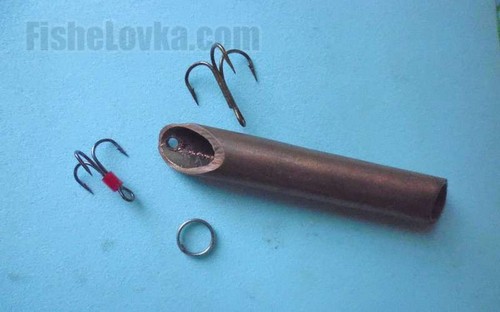 Photo 3. The elements of the spinner.

The question of the size of the tubular spinner has no clear answer. All depends on fishing conditions. In particular – season, which depends on the behavior of freshwater predators, the depths of the horizon, the strength of the flow, from the ice, shore, or boats is fishing. Also take into account the elevation of the reservoir bottom. For example, hollow aluminum spinner-tube-for perch in the winter will have 50 mm in length. Outer diameter from 7 to 10 mm. Without shipping, but with Berlusconi, capacity rings, a tee, it will weigh about 7 grams. Same bait, but made of copper tube twice as heavy – 14 oz. Oblique cut on both sides of the bait – the so-called angle of attack, can also have different meanings. As a rule, from one end of the bait it varies between 30° and 60°, on the opposite side this value is stored in the region of 20°.

Important! As practice shows, only on the water, testing the game is handmade, it is possible to establish the exact figures on the angles of attack. Filled tub at home is no help. After all, to set the spinner – do not float ohrozit.

The manufacturing process of the tubular spinner

The undeniable advantage of pike baits-tubing for pike or pike-perch, perch is easy to manufacture, when compared with the process for “kalabalak” or “turntables.” The algorithm of actions is the following:

Thus, a tubular spinner bait for walleye, pike, perch and ready for use. Okrujenie tubular lures are manufactured to the same pattern. But in addition pour molten lead one or both sides of the lure. When sealing two sides, can be put into the cavity of the bullet for a sound effect. Once the treated surface has cooled, they must also be sanded. Next, we carry out the Assembly of hangers described above.

As mentioned above, the composite spinner tube requires more detailed work in the process of its manufacture. Fisherman from “hill” would say that without Miller and special equipment such lure is that you should never do. Naive foreigner, Russian ingenuity and perseverance works wonders! So, step by step instructions as follows:

Piece of work will be required in the sawing of the ribs, and in raskladyvanii rivets. Instead, get a efficient lure with the original game. Maybe not the first time. Therefore, you should stock up on a large piece of pipe.

Important! In the manufacture of a compound of spoons you can use different alloys. For example, the middle of the make of copper, and its front and rear part in aluminium. Can not match the size of the segments – the middle more, and the two lateral portions are smaller in length and diameter.

A few words about the “decorations” on the bait, without which the story about how to make spinner-up on a perch or other predatory fish will not be complete. “Jewelry” refers to the various mounted elements in the area of the tee. It can be:

The options are actually numerous. Such “decorations” make the lure even more efficient. In shallow water the fish distinguish color and can rush to the attack on something bright. In turn, the depth of the bait with the “decoration” looks more voluminous. In the process of posting sheds create additional vibrations which will immediately be noticed by the predator. These fluctuations can repeat the movements of the benthic fauna, which may be included in the diet of freshwater predators. In the end, as shown, walleye, pike, perch always provoked to attack, seeing something new and unusual.