As there are new models of lures DUO? Never asked such question? Project them on the computer? Maybe copy it to fish? Of course not. Do human hands. Painstaking grind and solder side of the workpiece until you get what you wanted to instill in her master. A prototype is already working Wobbler suitable shape. It turns out that each new Wobbler is a modified old. I’ll write the very very hard truth — even the most famous models of DUO lures were designed by the “educated” guesswork.

Take, for example, DUO Realis Jerkbait 120 SP. Its development had a hand in the President of the company DUO Masahiro Adachi. The development team has set a goal of creating the best bait for jerkbait (dash wiring), and, according to them, soon reached it. On the Jerkbait 120 SP, of course, had high hopes, because the game he was fantastic, but to assume that he fired in various parts of the world and the very different fish, the Japanese, of course, could not.

It turned out that this model failed in terms of design and in terms of the game, and in terms of business. Liked Jerkbait 120 SP’s in Ghost Gill color CCC3158 and our pikes, perches and Zanders, but not only to them. I was able to use it to provoke an attack of such fish as Chub, Chub and IDE. Wobbler this Japanese high quality manufactured and, as it turned out, very efficient. 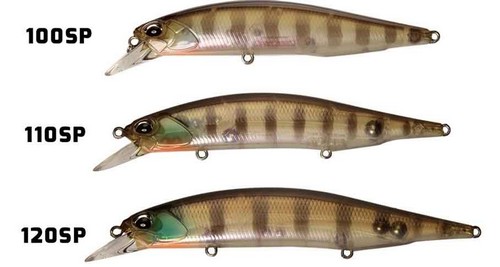 In my box it appeared as a replacement for Asura O. S. P. Rudra 130 SP. At the store, so straight and said — this is analogous to “Rudra”. In favor of the DUO also played the price is 30% lower and the colors under a perch, more real than the RPO-69 Real Perch O. P. S. Weight DUO to 2 grams less, and working a bit depth less than 2 meters. But it is also a jerkbait is very similar in form to the famous bait from O. S. P. Asura

The characteristics of the Wobbler DUO Realis Jerkbait 120 SP

The manufacturer offers 47 colors and patterns of the Wobbler DUO Realis Jerkbait 120. The series has pop-UPS, lures, and special pike model with two large treble hooks. By the way, the hardware on them is excellent and does not require replacement.

Body shape lure a classic minnow. Wobbler sufficiently taut laterally and look fat from behind. Has a small and thin blade, is inclined at an angle of 45 degrees relative to the axis of the lure. Complete design 3 tee (No. 5).

Inside Jerkbait 120 SP is a noise camera system long cast. Somewhere I read that the balls inside the lure of two types: titanium and stainless steel. And for good reason. The combination of the noise characteristics of the metal elements are allowed to extract a unique sound. When potrazivanje Wobbler DUO is not the most noisy, but the sound of it is really unique. At the same time and high and low.

Wobbler developed specially to dash wiring, and it is seen after the first potager. Start it with ease. And it plays during even small jerks “bold” and sweeping. The wiring is the Christmas tree at 5 plus. Sleepy twitch — the same roundabout with the sign “+”. Moreover, DUO Realis Jerkbait allows 100% to repeat the previous trajectory of the transaction. It is seen that unscientific method, the engineers managed to achieve the highest performance. I have the feeling that the lure floats for a given program. To control her pleasure. As for me, the game DUO Realis Jerkbait brighter than Rudra 130 SP.

In flight, DUO Realis makes only one revolution in the initial stage of the flight. In the future flies like an arrow. Flies 45 meters, 0.17 mm. cord Unambiguously in range and accuracy is not inferior to the more massive “Rudra”.

Wiring, when and where to apply DUO Realis Jerkbait

I especially like to spend it in the style of dead twitch, moving it literally centimeters. As DUO Realis Jerkbait 120 SP is able to hang over the place, can not nobody. For short distances you can play them for a very long time and literally drive you crazy fish short patikami. Of course, it can not provoke. And this realization is causing a real buzz.

Ideal conditions for the crank — calm combined with shallow bays, bayous and lakes. DUO does not like current and wind, it requires precision, and this is probably his only drawback. But it can be used as a tool for dolove.

Even if the pike got stuck, to stand before the game, DUO Realis Jerkbait 120 SP she can’t. I had a case: first, the pike cut bait on a jig a few minutes later, I bait already picked out from her mouth. Jerkbait with a metal leash gave her no chance.

Best of all, this lure works for “warm” water in the layer up to 1.5 meters. In my experience, the deepest dive — dive to 2 meters. Remember, this jerkbait can be controlled perfectly when lifting the rod up — you can animate the lure almost to the surface, and lowering the tip to the water — you can force the DUO to surf the horizon below 1.5. So basically, all the places where you can hold the bait at depths less than 2 meters — the target for DUO Realis Jerkbait 120 SP.

This is not a purely pike Wobbler and caught different species of predatory fish (species composition caught his fish I cited in the beginning of the article), but the lineup is pure and pike modification. At the beginning of this year, in addition to acclaimed in the past years the DUO had acquired his brother REALIS JERKBAIT 120SP PIKE. Crazy-realistic colors ACC3820 Pike ND. And he has done this season! The number caught him a pike, casting, eloquently speaks about it. Although, honestly, seriously with him not competed not “Rudra”, not “perches” brother Jerkbait. They just often do not reach the hands. The movement of the lure in the water of such a case is not presented, and it is often DUO to save the fishing.

Pike’s version is perfectly coped with his task all season. Pike at him properly caught, not embarrassed by them either 120 size or enlarged tees. Sorry, the bulk of the catch was less than 30 centimeters long (there were cases of capture of cords the size of a Wobbler). The biggest fish, the strength of the fittings, was polutorametrovaya a Donk. Metal was for her.

In fact, it’s the same Jerkbait 120 SP, but with two enlarged the size of the tees. Also it offers exclusive colors, simulating the pike and a little less weight. In all other aspects he completely copies trehgroshovaya brother.

Best or not — it is that the question? Perhaps by far the here is difficult to answer. But I will try to put his assessment. I’d take a fishing DUO Realis Jerkbait 120 SP as the only bait. And the catch would not have experienced.