Som is the largest freshwater predator of Russian water bodies, which not only beginners, but also experienced anglers dream of catching. Properly assembled equipment for catching catfish, as well as a good knowledge of the characteristics of the behavior of this fish will allow the angler to become the owner of a worthy trophy. 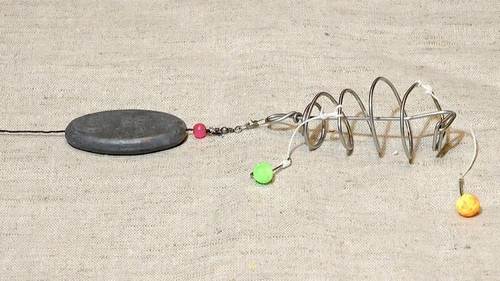 In large reservoirs with a good forage base, catfish can grow up to 3 m in length and weigh over 200 kg. It is easy to distinguish it from other fish on several grounds:

The color of the predator mustache depends on the color of the bottom soil in its habitat and on the age of the fish. The coloration often contains dark tones, but occasionally there are soma albino.

Unlike most other freshwater fish, catfish prefers to lead a sedentary lifestyle and can live all their lives in one pit, leaving their refuge only for the time of feeding. Various natural disasters, leading to a dramatic shallowing of the water body or impoverishment of its food base, can force the mustache to leave their habitat. This predatory fish is found in water bodies of various types: 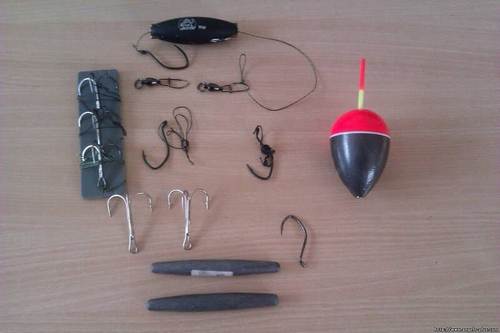 For permanent residence, catfish chooses places with depths from 8 to 16 m. “Usatiy” eats both in the dark and in the daytime, but shows particular activity at night. His diet includes:

Large individuals have their hunting grounds on the reservoir and do not allow other relatives there. Adult soma can form groups only during the winter period on the territory of the wintering pits.

Location and time of fishing

The result of catfish fishing depends largely on the knowledge of those places on the reservoir where the predator goes to feed. The most promising places for catching catfish are:

In standing bodies of water one should look for places with sudden drops of depths. When fishing on the river, it is necessary to pay attention to places with reverse flow, as well as deep reaches. The depth at which catfish prefer to feed may vary depending on the time of year.

The period from July to October is the most favorable time for catching captured catfish. During this period, the predator mustache is stably caught on various tackles. With the cooling of water, the catfish becomes less active, begins to slide into wintering pits, but still continues to respond to the natural baits and artificial baits offered to it. After the water temperature drops below 8 degrees, the mustache stops pecking and falls into anabiosis before the onset of spring.

Som reluctant to react to the bait in the hot afternoon hours. It is much easier to catch it in the days when the heat subsides and the peaceful fish come out of the daytime shelters. The most productive is considered night fishing, during which the angler gets a chance to catch a truly large predator.

What gear is required

On catfish fishing, there are increased requirements for gear, which is connected with the large size of the catch that can be caught on the hook. Properly assembled tackle will allow you to easily throw a snap into the fishing zone and ensure reliable fishing of the fish.

The classic donka is the most common tackle for the mustache predator. This fishing gear for catfish consists of several elements:

Fiberglass rod has a large margin of safety, which makes it possible to fight with large specimens. A spinless or inertial reel mounted on a spinning rod will allow you to throw the bait far away and will help the angler when diving. The bite of a catfish can be very harsh, therefore for its catching it is better to use coils equipped with a baytranner system, which will not allow the fish to pull the tackle into the water. If such a system in the coil is missing, then you need to loosen the friction brake, which will ensure the unhindered descent of the fishing line from the spool. The assembly scheme of the finishing gear is as follows:

Somov’s mouth is littered with many small teeth that can damage even the thickest monofilament line, significantly weakening its strength. Fluorocarbon monofilament is highly resistant to abrasive loads and easily resists small catfish teeth. The role of the bite alarm is played by a bell hanging on the main line.

Kwok fishing is also very productive and is widely used not only in Russia, but throughout the world. The KVOK itself is made of metal or hard wood. Such equipment for catching catfish is characterized by maximum ease of assembly and includes the following elements:

Nylon cord is passed through the hole of the sinker “olives”, after which, a triple hook is attached to its end. The sinker “olive” moves 1 m above the hook and is locked with the help of a small lead load, clamped on a cord. When fishing for bots, leashes are usually not used. At least 20 m of cord should be wound on the reel.

Equipment for night fishing on feeder

Feeder equipment for catching a catfish is considered more sporty and allows you to get the maximum pleasure from hauling fish. The set of feeder somovy gear includes:

In catfish fishing, sliding feeder equipment is used, which fits in according to the same principle as the finishing version, only a feeder is installed instead of a flat sinker. A firefly is used as a bite alarms, mounted on the tip of the feeder and allowing to see bites in the dark.

Fishing equipment for catfish from a boat 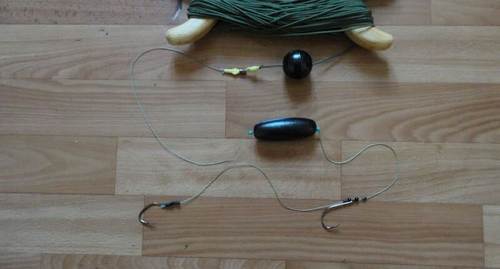 Soma can be effectively caught from the boat using trolling. Trolling gear allows you to quickly catch large areas of the reservoir and includes:

The simplest fishing gear from the shore is a piece of thick fishing line or braided cord with a hook tied at the end. The lead weight is fixed 50 cm above the hook. The free end of the monofilament is tied to a long elastic rod, cut right on the shore and firmly stuck into the ground.

Hook snap bait bait or frog and thrown into the coastal pool. Such equipment does not require constant monitoring. Fisherman can check simple coastal tackle 2-3 times a day. The pecked fish usually hooks itself. The fisherman can arrange several of these equipment at once, which will significantly increase his chances for success.

The technique of catching catfish directly depends on the type of equipment used. In the daytime, the best results show the active methods of fishing, which include trolling and catching the bob. At night, it is more convenient to catch a classic bottom or feeder gear.

For daytime fishing for catfish, the angler will need a reliable watercraft, with the help of which he will be able to get to the parking places of the predator. If the fisherman is going to catch trolling, then he will need to pre-select the area on which to catch. In the selected area there should be a complex bottom relief, most suitable for the habitat of catfish. Having sailed to the intended place, the angler throws a wobbler 50–70 m from the boat and begins slowly to row against the current.

The main thing in trolling fishing is to choose the right speed of the boat and choose the appropriate type of wobbler. It is possible to count on the bite of a catfish if the wobbler goes no more than 40 cm from the bottom ground.

For fishing per second, it will also be necessary to select the area in which there are pits or a flooded snag. Having sailed to a certain place, the fisherman lowers the tackle to a depth of 3–5 m and begins to quiver. Attracted by the sounds of a kvok, som rises to the surface and sees bait hooked on a hook in the water column. After the poklevka it is not necessary to hurry up with the hooking, it is necessary to let the fish swallow the nozzle deeper.

At night, it is preferable to use bottom or feeder gear. Fishing on a donk is quite simple and consists in the fact that the fisherman throws several tackles at once into the perspective zone and controls them while waiting for a bite. From time to time the angler should check the status of the bait on the hook and, if necessary, update the nozzle. The bite of a catfish to donku looks like a sharp line of fishing line, after which an immediate hooking should follow.

Feeder fishing for catfish is a little more difficult, but at the same time much more effective, as the angler constantly lures fish with bait mixture clogged in the feeder. The main thing in feeder fishing is to constantly get the trough in the same place, which is not so easy to do in complete darkness. Attracted by the smell of bait catfish comes to the point of fishing and is tempted by the bait given to him. If in the fishing zone there is not a large accumulation of barkers, where the fish could have escaped during the haul-out process, then you should not overload the tackle and try to get the catfish ashore as soon as possible.

Bait and lure on the predator

Modern fishing industry produces a variety of bait, focused on catching catfish. The main component of these baits – fish meal, soaked in fish oil and amino acids. Som responds well to similar bait mixes and quickly approaches the fishing zone. As animal components in the bait, you can add chopped worms or chopped meat of bivalve mollusks.

The choice of bait affects the quality of the catfish bites and the final result of all fishing. Constant experiments with the bait will allow the angler to rely on a good catch.

As live fish, it is better to use carp fish. For bottom fishing, roach weighing 100–300 grams is well suited. When fishing for Kwok, preference should be given to asp or sabrefish. Zhivets will behave more naturally if you stick it under the upper fin. Zhivets is considered the best nozzle for snoring catfish.

Properly prepared chicken liver can provoke even an inactive predator to bite. The secret of the catchiness of this bait lies in its unique smell, which appears after the chicken guts lie in the sun for several hours.

On the frog or cancer

Cancer should be used as bait when fishing is conducted in the bottom layers of water. This arthropod is a habitual food for catfish, especially during the molting period. On the hook, you can fit both the whole cancer and the cancer neck.

The frog is a versatile bait that works well throughout the summer. It is preferable to use this amphibian when burning in coastal pools and backwaters. The frog sits on the hook behind the upper lip.

Caught on the hook large fish with improper handling can severely injure the angler. To avoid unpleasant situations and preserve your health, you need to know a few safety rules when fishing:

Compliance with these simple rules will prevent possible injuries. To catch a large catfish is better to go to the company of a trusted friend.

Experienced fishermen can always give some useful tips to a novice colleague. When fishing for catfish, follow these guidelines:

Properly assembled equipment for catching catfish will allow you to cope with trophies weighing several tens of kilograms and will give the angler a real pleasure in dealing with large fish.