The history of fishing hooks

In equipment for Amateur and sport fishing to hook and line, play the most important role. If no other elements and can be dispensed, without the two — way. The hook detects and holds the fish, and he is a carrier bait, and in some cases it is.

Having a hook for fishing and strong thread, already 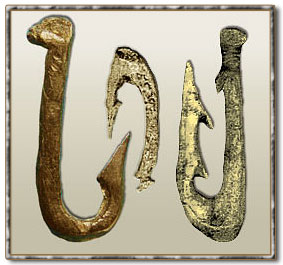 you can fish, though not such as we would like, but is suitable to satisfy hunger in conditions of wild nature.
That is such a primitive way, using wooden hooks and fishing as ancient people in the Paleolithic era.

Archaeological finds confirm that fisheries that appeared later and gathering hunting wild animals, occupied in the life of primitive people a very important place and existed long before the advent of agriculture.

Found in Japan the oldest fishing devices, similar to modern fishing hooks, there are no less — 22,5 thousand years. The age of the artifacts is established by the method of radiometric Dating, so that the question can not be – to fish with Chrysochou tackle was from prehistoric times.

The component parts of fishing hooks and their distinguishing features

If fishing hooks our ancestors differed little from each other, the appearance of the modern products are so diverse that even a beginning angler it is difficult to determine the choice of this important attribute snap, which depends not only fishing success, but the qualities of its process.

The General design of the fishing hook is made up of separate parts, each of which performs a designated function. (see Figure 1.). 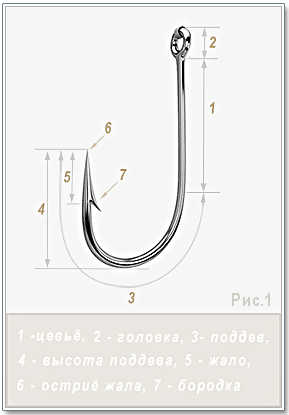 Undoubtedly, the sharpness and durability of this accessory are important qualities that characterize it, but apart from them there are a number of signs that sistematizirovat whole assortment of fish hooks and which guide their choice.

1. The type of hook is determined by the number of brands or piercing ends, in which the hooks are divided into single, double and triple.
Traditional products with one stinger are most widely applied in all directions of fishing. If you wish to increase the tenacity of the lure, it gives you double and triple hooks — “doubles” and “trebles”.

Most often this need arises in angling predatory fish, when it is required to equip the artificial bait and dead fish, crayfish, newts and frogs, used in this capacity.

2. The shape of the hook is the main parameter by which manufacturers of products alter it, fitting under different heads, styles of fishing and for specific species of fish. The General form of a fishing hook has a direct relationship with the configuration and dimensions of its individual parts: the ear, the forearm, poddevom and sting.

3. Accurate dimensions and durability (a test) of the hook is determined by its length, width, diameter of the wire from which they are made and the maximum load which this fishing accessory is able to withstand (Fig-2).

Not all manufacturers indicate this information on the packaging of products, many are limited only to relative size — “Size”, expressed as a number or numbers. Each of the countries-leaders in the manufacture of fishing products, have their own numbering.
Despite the fact that it is considered the most common international system adopted in England, the Russian is more acceptable to domestic fishermen.
In contrast to the international numbering, which is the smallest fishing hook with a width of 1.7 mm corresponds to the largest room — No. 24, Russian standard numbers are assigned in ascending order of size from No. 2 to No. 12, and the number value corresponds to the width of the product in millimeters (see tab.).