Approaching another season of ice fishing, and hundreds of thousands of anglers are preparing your main tool for winter fishing ice screws. But so ready for the new season, fishermen with experience, and beginners who for the first time in my life I want to fish from the ice, tormented by the question — how to choose ice screws for winter fishing? 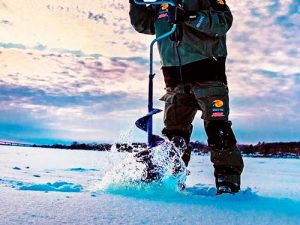 These fishermen have much experience or deep knowledge on the subject. Try to understand about what are ice-axes, and how to choose a suitable for yourself.

The main characteristics of ice screws

Types of knives for ice screws. What where to apply? 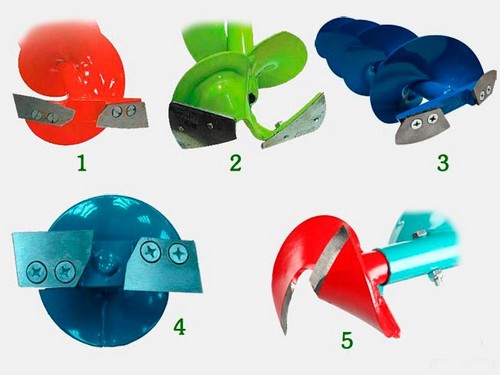 Experienced fishermen preparing for fishing, I try to know in advance the quality of the ice on the pond, where they gather to fish. They are interested in thick ice or not, wet or dry, if damp, just viscous or still flaky? Depending on the condition of the ice screws is a certain type of knives. The stores that sell fishing equipment, you can detect the following types of knives:

There are not all kinds of knives on the shelves, you can find brand new types, because engineers are constantly working to improve existing models and invent new ones.

Most often, fans of winter fishing on your picks put straight knives. They are quite effective for drilling of any ice, only, for example, to drill them raw ice would be heavier than dry.

In the spring, when the ice becomes wet and soggy, the fisherman will have to spend great effort to drill even one hole. Anglers chasing bass, sometimes for fishing nasverliv two or three dozen holes. Many of them put screws in the spring of serrated knives. They are ideal for drilling crude and viscous ice, because they have a smaller contact area of the cutting edge with viscous ice than other types of knives.

Two-stage and three-stage knife designed for drilling holes in very dry ice. The cutting edges of such knives are arranged in two or three levels, they are not cut, and crumble, frosty dry ice.

Spherical knives, as well as direct, universal, they can be drilled any ice. The big disadvantage of such knives is they are very difficult quality to sharpen by hand. It is practically impossible, without special devices, to maintain equal angle all along the semicircular surface.

The auger of the ice: what are what to pay attention?!

The main purpose of the auger of the ice — removal of friable ice during the drilling of wells. The diameter of the auger determines the size of the hole that the fisherman drills out.

Typically, the auger is welded to the axis of the ice-drill with spot weld or continuous line throughout the contact with the body.

As already mentioned, depending on the size of the auger and knives, depends on the diameter of the drilled hole. Both domestic and foreign manufacturers produce models that can be drilled hole diameter:

When choosing the size of the ice should be aware that:

The most popular among anglers are the tools to drill holes with a diameter 110 and 130 mm. Through holes of this diameter will fit most types of fish, even pike weighing up to six pounds. Anglers specializing in catching large fish, it may be advisable to use ledoburami that allows traders to make in the ice holes with a diameter of 150 mm.

The handle of the ice and direction of rotation during drilling

To drill a hole the Patriotic ice screws, it is necessary to rotate counterclockwise around its axis, imported ice screws right rotation, that is, it is necessary to twist clockwise. For the beginner in ice fishing this nuance almost doesn’t matter, and the angler with the experience to move from the domestic imported instrument will be difficult habit matter.

Until recently, the Russian picks packaged with plastic handles that did not tolerate severe frosts and harsh treatment — cracked. Experienced anglers they were wrapped with duct tape and band-aid, thus increasing the strength. Lately the situation is changing for the better — a domestic ice-axes were fitted with a “warm” and rubberized handles that are not afraid of cold and shock.

The connecting nodes have ice screws

The length of any ice screws not less than five feet. In order that an ice pick can be easily transported in vehicles, and it is their dimensions do not interfere with other people, it is equiped with mechanisms to temporarily shorten the length of the tool. This result is achieved either with the help of a telescopic device connecting the lower and upper tool or with the aid of the mechanism, allowing to fold the tool in half. Most anglers buying a new drill, prefer tool that can be folded.

The types of ice screws

Of course, most fans of winter fishing prefer hand tools. Hand-picks several times cheaper, lighter, more compact their motorized counterparts. If the angler moves around the reservoir on foot, not with vehicles, not with his hands will pull MOTOBLUR, which weighs considerably more hand tools. Motorized equipment generates more noise that can scare fish. 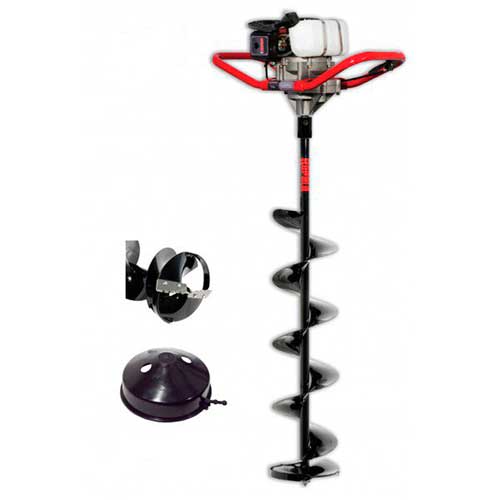 Most often, motonori for fishing manufacturers set the two-stroke petrol engines from one to three horsepower. Two-stroke engines motobaro work on a mixture of gasoline and oil in the ratio of 40:1. Engines motobaro for fishing from well-known companies adapted to winter conditions and wind up in any frost. Weight petrol auger can reach 10 kilograms.

Electric picks have a number of advantages over gasoline ones, they: 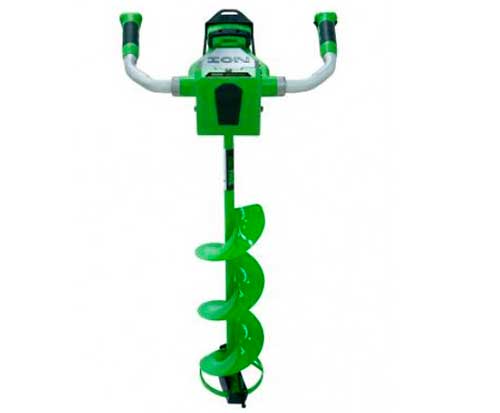 The motor of an electric drill is driven by using the internal battery. As a rule, supplied to the Boers is, with the help of the battery can be recharged from the cigarette lighter of a car or other motorized transportation vehicles. In most models of electro-drills the possibility of replacing the regular screw on another greater or smaller diameter.

Screws with a drill for winter fishing 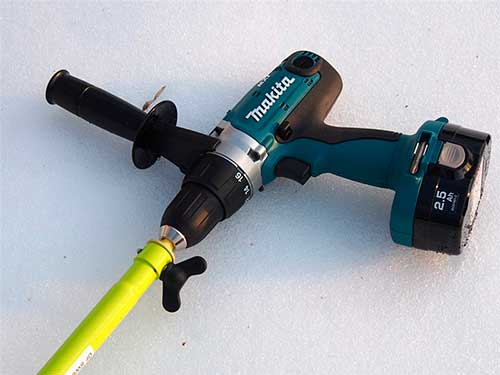 Imported hand-picks, for example, firms Mora, do not require revision of the adapter, they have the possibility of using the screw together with the screwdriver, or another engine — electric or petrol. Adapt domestic screws for the described combination can not everyone — needs skilled hands to rework the adapter.

To drill effectively could be used in combination with a screw, it needs to have the following characteristics:

Experienced anglers are advised to use drills with Nickel-cadmium batteries, although they are heavier than lithium ion batteries, but it is better holding capacity in the frost. It is preferable to use screwdrivers from famous firms such as:

From domestic screwdrivers good for ice fishing have proven themselves the products of the company “Interskol”.

Don’t know what to choose ice screws for winter fishing? On the pages of fishing sites, you can find many different ratings ledoburov, which show the superiority of some models over others. Reading these ratings, you will notice that there are a few names of the models, petrol and electric ice screws, moving from ranking to ranking, here they are: 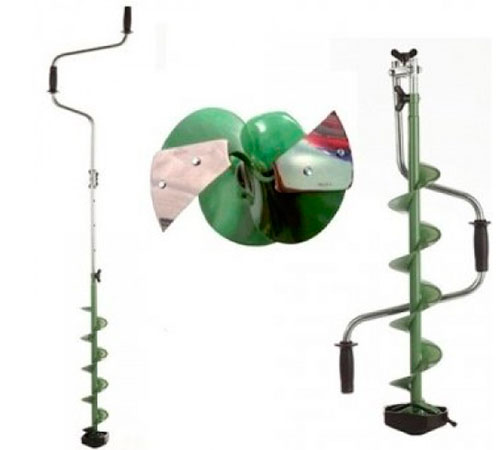 Fishermen praise this model for its durability, efficiency and light weight. Available picks of this model is able to drill holes with a diameter 110, 130, 150 mm. Equipped with a spherical knives. The cost of these models from 7000 to 9500 RUB., the cost of a spare set of knives almost 2,000 rubles.

Mora ice Expert Pro 130. The test was performed on wet ice with a thickness of 55-60 cm 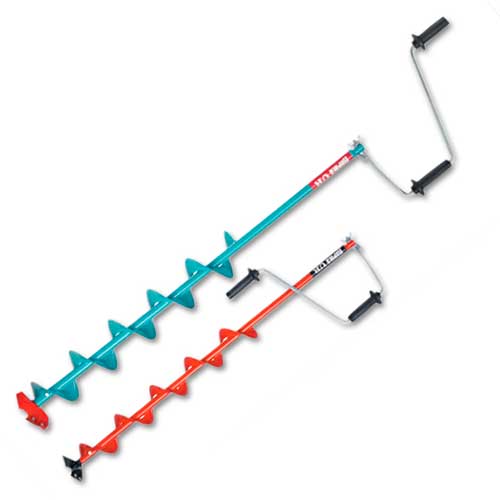 Available in several modifications, which are designed for drilling holes of different diameters— 100, 115, 135, 155, 205 mm. Knives these ice screws are attached to the removable composite head. The weight of the ice 3 kilograms. The cost of the Finnish instrument is not much more than domestic samples — 4-5 thousand rubles, the cost of a spare set of blades not less than 1500 rubles.

The product of the plant of Barnaul — “Tonar LR-130 classic” 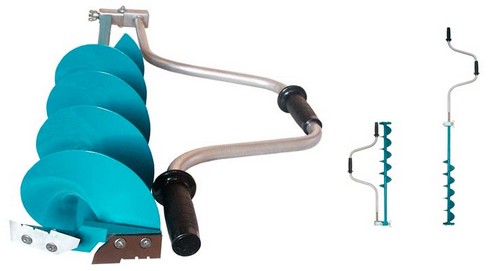 Little inferior in its reliability and efficiency Western counterparts. Its weight is 2.5 kg. the Cost of domestic ice — 1400-1500 rubles. 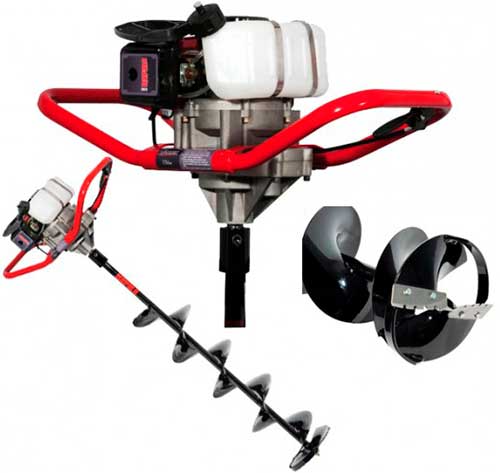 Popular in Russia. It is perfectly adapted to the winter cold — starts in any frost. Equipped with two-stroke engine with a capacity of 1, 3 HP weight 12, 5 kg. screw diameter 200 mm. Its estimated cost is 21 thousand. 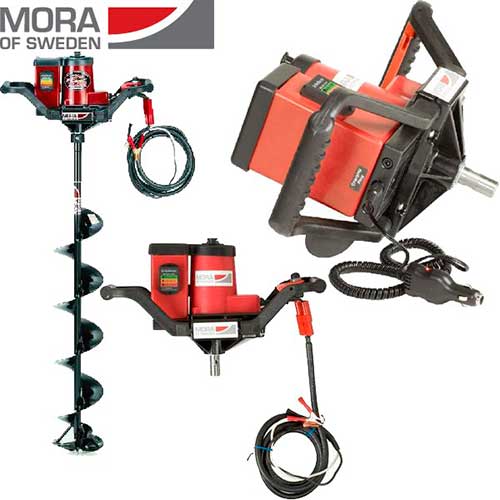 Honored is a leader in many rankings electric ice screws. Here are its capabilities: it can operate from internal battery and from external power source, for example, from a network of snowmobile, which in his version includes a cable length of 3.5 meters. Battery capacity enough to drill about twenty holes with a diameter of 150 mm ice thickness of one meter. The product weighs (without screw) 10 pounds. Approximate cost is 19 thousand rubles.

How to choose ice screws for winter fishing

There is no doubt that one of the main criteria for the selection of ice screws for many fans of winter fishing will be the price. And the current range of tools for drilling ice, presented on the shelves of the fishing stores, allows you to make a decent selection of goods to the fishermen with different financial capabilities.

The owner of the Russian model of ice screws “Tonar” for fifteen hundred rubles can not be on the ice in a more advantageous position than the fisherman, piercing the ice with the expensive imported tool, as domestic knives is much less blunt, if what the pressure frozen in the ice the garbage. And are Russian knives cheaper than imported counterparts.

If the alleged object of catching smaller fish, it is not necessary to buy screws with a screw of large diameter, it will be harder to drill than a smaller diameter instrument.

The fisherman happens on the ice a few times during the season, it is unlikely you need an expensive MOTOBLUR. If the angler moves on the water fishing only on foot, carry for a motorized technique he will be tough. But the angler who has motocoach or any other snowmobile, and you have one fishing to drill several dozen holes, bensabeur or an electric drill will come in handy. Fishermen walking fishing sustainable companies can together to buy an expensive motorized drill.