Many anglers do not like to freeze on the ice with fishing rods, they are looking forward to when it will be possible to surrender to their favorite hobby with a spinning blank. 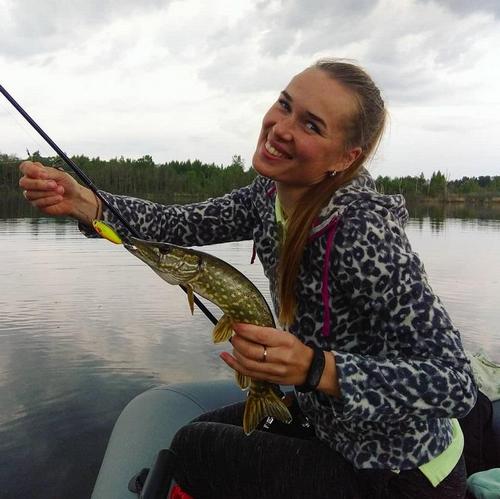 However, you should first prepare for fishing:

The rest of the preparatory process entirely depends on the preferences of the fisherman himself. When fishing with and without a ban on moving around the pond, it is advisable to pre-inflate the boat and check it for holes and cracks . In addition, depending on the weather they prepare warm clothes, take a rain cover, stock up on hot tea and snack sandwiches.

Where to look for pike in spring

As soon as the ice on the water comes down, you can immediately start fishing for pike on a spinning. To hurt the fish in this period will be minimal, just a couple of days of weather with the sun all the symptoms will pass. However, to be with the catch you need to know some of the subtleties of the search:

The best time according to experienced anglers will be the period from 7 to 10 am in April , as well as the evening dawn in May , when the pike exactly spawn and sore.

Important! It should be understood that in the spring, spawning of all fish occurs. The best time to catch a pike will be the front spawning zhor and after spawning.

To find out the exact location of the predator in this period you should pay attention to the bursts on the pond .

Fishing for pike in the spring on a spinning is carried out on lighter bait, heavy deep-water use in this period does not make sense. That is why the tackle is formed from the following components:

Such tackle is suitable only for spring fishing for pike , in summer and autumn the predator will behave more aggressively, and this will require more robust tooling.

In addition to the right gear you should be able to choose the best bait for pike in the spring. For this you need to know some secrets:

In all other respects, it is worth relying on your own taste and having armed with a sufficient number of baits to go fishing. Select some will help their small description.

This bait is one of the most catchy options for pike in the spring. It is made in the shape of a fish, but it doesn’t have any digging tools at all; A special feature of the popper is the presence behind the gills of the slots through which the air passes during the posting. This creates a specific sound that attracts the predator.

The most famous manufacturers are:

The cost of the bait will depend on the company and color, with the effect of 3D bait more expensive. There are other manufacturers, their prices may be more democratic.

Probably, the spinners are the best baits for pike in the spring, according to statistics, it is regularly among the leaders in catchability in different regions and in different reservoirs.

In the spring, even a small pinwheel can attract the attention of a predator, and not always small. Large individuals often notice and attack the pinwheels in the shallows of beaches.

Almost any color of the petal is used, but there are still some subtleties:

But the fly on the hook can be very different, most often independently equipped with red, green and salad options. The most catchy products are from Mepps, Condor, Kuusamo, Lacky John.

This bait can be said to combine two types at once, it got a petal from a pinwheel, and a head with a fringe of silicone. It is best to use spinbate on pike in April for spinning, this bait will help to lure the predator near the bark and reeds, as well as in last year’s vegetation.

Tip! Near baits and flooded trees to hold this bait should be carefully, the hook can catch tightly.

In early spring, it is advisable to use spinner with two petals, but at the end of May it is better to choose with one.

Silicone baits will be an excellent option, and the pike will react equally well to the vibrotail and the twister.

The size of the bait is chosen relatively small, 3-5 cm will be quite enough. The colors are very extensive:

Fishermen with experience recommend always having fish with light accumulative effects in their arsenal, such options will help in catching a predator after evening dawn or in the early morning.

The most popular is silicone:

Now more and more often spinningists in the spring period use silicone from the edible series. There are many forms of it, but the most catchable are:

The rest are also caught, but it was on these that the most trophies were caught. Of the colors it is better to give preference to violet, lettuce, caramel, lube oil, milk color.

Do not dwell only on the above baits, sometimes experiments allow you to catch trophy specimens of the predator.

In the spring, you can fish from the shoreline and from the craft, catching pike for spinning for each of these species will have their own characteristics. And the tackle itself will have some distinctive features.

For fishing from the coast of the pike in the spring using forms of rods from 2.4 m, the reel for tackle will fit with the spool to 2000, this will be quite enough. The blank is better to choose from carbon-based options, and the test should not exceed 15 g. For fishing for pike, shallow banks are chosen, it is here that the predator will go out to bask after a long and cold winter. It will follow here after the fry, and they will be the main ration during this period.

From the shore, it is advisable to use turntables or kastmaster, a wobbler will also work well. A small silicone lure to hold correctly such a form will not be easy, this is unlikely for a beginner to do.

Before you pull the boat into the water is to study the restrictions and prohibitions in the region . If fishing is allowed, it is advisable to check the correctness of the chosen gear:

Everything that was described above can be used as bait, however, it is poppers and edible silicone of small size that will be the most convenient. You can also use a wobbler type minnow, but their size should be no more than 44 mm, and the colors resemble a beetle or a larva.

The pinwheel on this form will work perfectly, throwing it preferably along the coast near the reeds or last year’s vegetation. There will also be promising fishing sites with laden scythes at the curtains and flooded trees, but there are usually very few such places.

The transactions in both cases are the most common, but you should not hurry too much. In the early spring, the pike has not yet fully departed from hibernation, its metabolism is slowed down, it is physically unable to have time to attack the lure that is passing quickly near it.

When can you catch pike in spring

In most regions, the law on limiting the catch of both peaceful fish and a predator comes into force in the spring. This is due to the spawning of inhabitants of reservoirs. At this time it is allowed to catch only one rod with one hook. The ban is usually valid from the beginning of April until the end of May.

It is recommended to catch a pike after spawning so that she can produce offspring . Usually this period begins in mid-May, but the weather has a direct impact on this process. Warm spring spawning is faster, but with a cool and prolonged, it is delayed for a long period.

We studied the catchy bait on a pike, picked up a snap and chose the most successful places for fishing. It remains to put into practice the knowledge gained and boast of catch. No tail, no scales!