Many of the fishermen with the use of rowing boats, inflatable, sooner or later, think about the installation of the boat motor. This is an obvious decision, allowing to save a lot of time and effort, especially after a long fishing lures, when the hands seem to be stone from many dozens of casts. But engine involves design of all the boats — for example, the popular small boat of the bark on the logic of the manufacturer is designed to move only with the help of oars. Therefore, for the installation of the engine on this craft uses a special fixture is mounted to the transom of the boat. 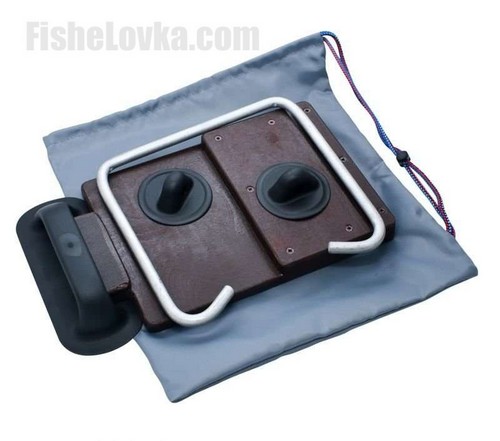 Why is it necessary

Hinged transom for inflatable boats — this is a hard plank construction, a special area for mounting the motor on the rounded Board the inflatable boat. The use of hinged transoms for boat PVC or rubber is the only way to install them on the engine if it is used for the model was not provided. The transoms-handmade not fall under the concept of “significant design changes”, so their use is not required to agree with the manufacturer or by some regulatory authorities.

Outboard transom can be assembled not only for the motor: it can be used to install holders rods, the so-called “coasters”, as well as other onboard equipment, such as sonar.

Tip! Just keep in mind that a homemade transom can only be used with low-power engine, with a capacity of no more than 3.5 HP, which allows speeds of 10 km/h.

The use of motors of higher power is justified only for those boats that already have all the mounts, because it is designed to move at high speed. An example is the eight-court “Bark” series BT — transoms they have built.

Homemade transoms — what are they

Transom mounted boat PVC stuff is possible. Pay only attention that the boat must be made from polivinichlorid — durable and abrasion resistant material. Installing a homemade transom on a rubber boat possible, but the rubber is less durable material than PVC, and the use of motor will provide an additional burden.

Transom for boat PVC has, as a rule, one universal shape is rectangular or square plate made of waterproof and durable bakelite plywood with a thickness of 16-20 mm. chipboard, fibreboard and other similar materials don’t apply their strength characteristics are not suitable for the required objective — sustain the weight of the motor. But regular plywood for the manufacture of the transom is permitted provided the impregnation of water-repellent composition, and coating the top of yacht varnish.

The differences in the design of the transom of the devices are reduced to different methods of fastening to the hull of a watercraft.

The latter method is the most time consuming, but allows the best way to distribute the weight of the engine and thus better handling of the boat.

We will describe the most common production version of the transom on the boat, PVC with your own hands is the use of the design on the brackets.

For making and attaching the transom to the cylinder the boat will need:

As last you can use the boat rail.

Of bakelite or any other plywood you need to cut two rectangles of specified dimensions. Handle gently file the edges. To bond them together so that the total thickness turned 32 mm (for fastening of most outboard motors, the thickness of the support should be 30-35 mm). The fastener can be carried out using conventional bolted connections.

At the corners of the large plate drill 4 holes to mount the frame.

Then proceed to assemble the frame that will hold our transom. In order to calculate the length of the bracket frame, will have to fully inflate the boat and attach the base plate to the rear of the turret vertically. Use the help of another person — it needs to hold the plate while you are using a measuring tape, measure the length of future elements of the frame and a marker on the container mark the points of bonding of rails.

Please note! After installation, the transom needs to stay upright!

The two eye will be attached to the cylinder top, one to support the transom at the bottom of the stern.

Of steel, better stainless steel, you need to make a 2 rod of circular section (1 cm) measured length plus a few inches of the stock. You can use brackets of any other section, the appropriate length. They attach securely to the top base plate using bolts. The design can be strengthened with additional stiffeners are welded to the engine on the transom is less than “walked”. To the bottom of the plate is attached to one support bracket.

Transom with his hands ready. Left to install it.

How to install the transom

Installing a transom on a rubber boat is the most demanding operation. By itself, the design of such boats does not permit the application of the most simple and reliable joints — bolted, welded, etc., so it uses a glue joint.

Transom set in rings that must be glued to the tank of the boat with glue intended for its repair. A view of the eye is, for example, guard rails or handle for carrying the boats (convenient as a support for the bottom of the transom). It is recommended to use the purchase details, as to make the rings yourself difficult (but possible — for example, of vulcanized fabric or material intended for the labels of the patches on the boat).

First, the boats must be inflated fully. Marked locations for mounting the rails slightly to clean up the sandpaper-nulevkoy, degrease with solvent and apply a first portion of the adhesive for PVC. Wait for some time to the first adhesive layer is partially frozen, apply a second, attach the plastic ring and press down firmly. Place so all the lugs to make sure the grasp has occurred, and to blow the boat in half.

At the last stage of mounting, you must install the transom with the bottom end into a supporting ring, the upper brackets insert into the corresponding rail, and to inflate the boat fully. Please note that in this construction, the retention of the transom on the cylinder is due to the elastic forces.