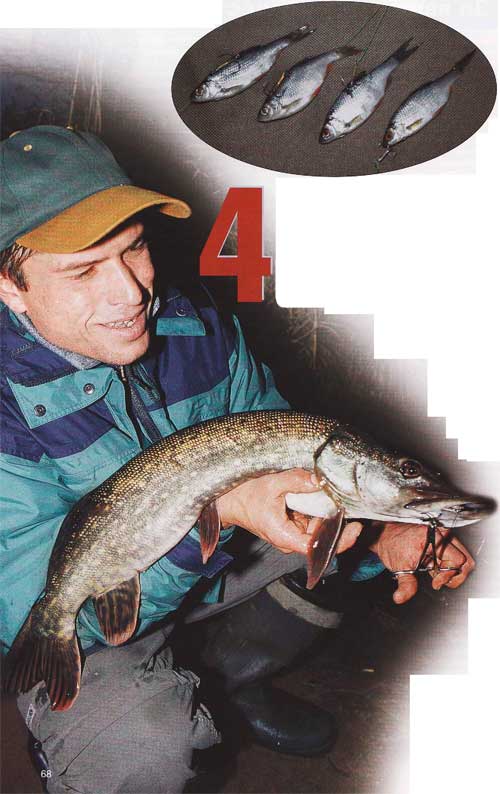 There are many ways of mounting the bait for catching predatory fish. But Holger Undercase enough of the four options, and each of them requires only one tee on a leash.

Four ways of mounting the bait. Efficient they all are, but each of them in certain conditions, some works better than others. 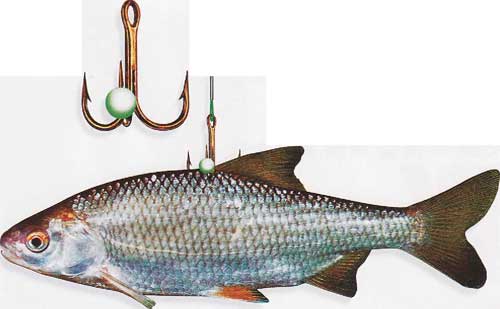 1. Method of mounting a bait fish for pike in tyhovoddya ringleader

In ponds head back is a very good choice. Fish bait can be served at all depths (under the water surface and the bottom) with a float snap-in. However, even sleeping fish floats naturally and horizontally in the water. This method of mounting the can e used any time of the year, but only in stagnant ponds, for the impaled fish is moving unnaturally. One crochet tee pierce the fish near the base of the dorsal fin and fixed with rubber beads with a diameter of 4-6 mm. So the fish stays better on the hook when casting.

2. Method of mounting a bait fish for pike dLa current and active transactions

On the course mounted in the upper jaw the fish is in a natural position. In a standing body of water when float fishing live bait patikami short drive to the fish seemed more appealing. The hook tee is passed through the mouth of the fish and out through the nostril. If necessary, such as frequent crimps at the bottom, you can use a single hook. In this method, a nozzle on the fish-bait is good to catch float itology or with the bottom snap to the bottom.

3. Method of mounting the bait for catching of a pike head first

A variant of the nozzle in pass the leash through the body of fish is one of the most reliable when fishing for pike. Even a drowning fish, after many casts firmly seated on the hook as well as pike after hooking. Using the nozzle needles of the steel line and dragged under the skin of the fish from the front back to the root of the tail, tee stick with one hook behind the head in the back. Impaled thus the fish-bait well served at the bottom when fishing for pike. But itology float snap it usually does not cause suspicion among predatory fish.

4.Method of mounting a bait fish for pike through the gills

Leash using a Packed needle is passed under the skin and through the gills of fish remove it through the mouth. A tee stuck in the body near the dorsal fin. With this method of mounting the fish held very firmly, so it can actively pursue a strong current. Fish-bait comes in for straight and naturally. You can serve it with a float snap, with a heavy sinker, spinning with a posting near the bottom. The disadvantage of this method is that stinger hooks directed toward the head, where pike begins to swallow prey.