Fall vertical jigging often displaces to catch the spinning, because the predator has kept at a great depth, and even speed wiring jig does not always bring good luck. Vertical jigging also gives you the opportunity to catch at a depth of almost all the lures, of course, corresponding weight.

But this type of fishing is in the fall on artificial baits means fishing by floating downstream, and on the wind. Usually this is a slow drift in catchability places, which are the long edge of the slope to the hole. It is in these places the most productive fishing. But in the vast expanses of large reservoirs is almost always windy. And wind often drives the boat with a speed boat motor at low speed. And such speed does not allow the lure to play at full strength of its capabilities. Baubles simply do not have time to sink to the bottom where she needs to climb in the snatch and tune up. Or wiring work, rather diagonal than vertical. This, of course, will not give any positive result.

What you can do in this case? The easiest way is to put the boat at anchor and catching in a plumb. But first, it’s too tiring – every time you drop the anchor, then take it out, move to a new place and start all over again. Second, dropping anchors to the bottom of the still discourages careful of the predator, the more the water is very transparent. In addition, always during the fall of the armature on the bottom is the noise.

In order to reduce the speed of the boat is drifting in the wind are simple, but very effective device called floating anchor, water parachute, parasol, and other names as you like, and what design used a floating anchor. But it really can even be a conventional open umbrella, lowered over the side on the cord. But the umbrella should be strong, otherwise it is not enough for one fishing because the water resistance is quite strong with gusty winds.

The movement and catching the drift allows for a faster sh in large expanses of reservoirs and lakes. Floating anchor allows more stable to stay the course than if the boat just downwind. Typically, when exposed to water parachute course changes very quickly or does not change at all, which can move along a predictable route was found along the edge. But, of course, the direction of the edge and of course must be the same. Usually the measurements of speed boats with exposed water anchor show “0” or the maximum speed of 2 km per hour, which is well suited for catching in a plumb. 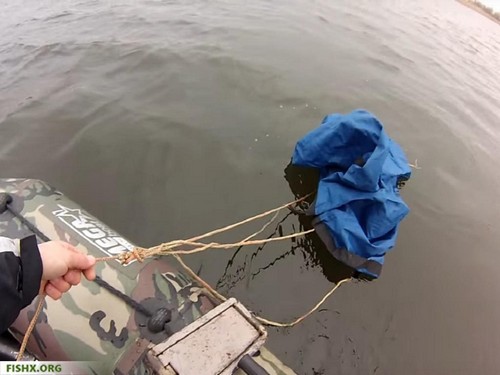 There’s another tactic of fishing using floating anchors – intelligence, that is, the movement of the boat in the drift is done and found successful places with a high density autumn predator. And there is already applied sheer trolling from a boat mounted on a conventional bottom anchor or use transaction speed spinning.

And if we talk about the fishermen who catch catfish on Kwok, they are in the compulsory use of floating anchor, or when the wind is strong the predator is in the area of the Kwok, due to the high drift velocity.

The speed of a boat in the drift can be adjusted. This is done by depth of water and length of the anchor cord. When you use float on the water surface, which is called the buoy, floating anchor will stay closer to the surface. The immersion depth is also influenced by the weight of the frame, on which the sheathing anchor. Metal rods would be more willing to dive to a depth. But the biggest impact on the speed of the boat in the drift having the size of the anchor, that is the area of the canvas. If you buy a ready anchor, these products are classified according to size. In the manufacture of the sea anchor with your hands you just have to choose the right size of straps or bars for the future of the armature. 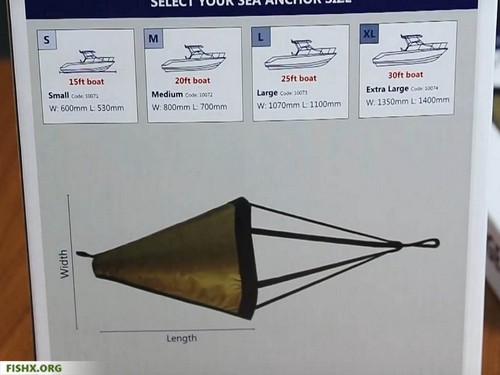 Device water the parachute can be the most simple and consist of a frame, which is a dense material or even polyethylene. Sometimes use a simpler version of the two load-bearing, where the upper wooden strip and the lower metal rod.